With Tráva (Jan Travníček) we wanted just acclimated there, get a altitude, sleep at least two nights in CIII (gradual altitude camp) - 7300 m and then, as much as possible get to Annapurna. This plan came to me that he threatened to Annapurna go alone. I was worride of it that I will not move the only safe route waterfalls just north wall. We are two, and so cheerful and also seems to Annapurna compared to last year is pretty busy. For day before was notified an attempt to summit - not successfull. I know it well, had to be one of the brothers Mingma, head of the agency that makes our service. But it also seems that there are people who move here now and will be attempting Everest and Lhotse, or through the grass and we'll be there alone again, but only time will tell, does not solve the price now. 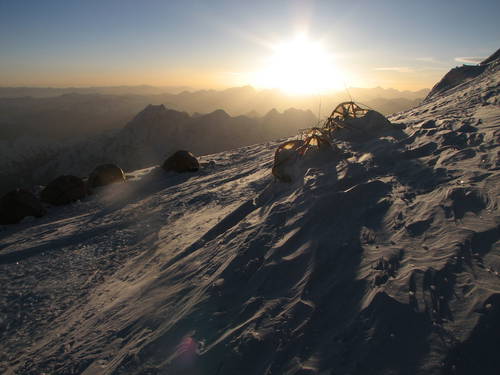 The way here we were a little complicated, I might never repacked so many times on expedition. At home, at the Prague airport, the hotel in Kathmandu to Annapurna and Lhotse, at the airport by helicopter in Lukla again ... To Lukla the flights were cancelled due to weather for several days and we finally took the helicopter, because we had no time. And apparently that day the weather turned and lot of flight flew away ... :-(. But we are finally could go to our "pre - peak". Eight hikers went with us and we gradually left on the way for various diseases. But don´t worry, they are in ok.  To the BC (basic camp - base camp), have got just Tráva, his Mirča and me as a supervision of kids. That was yesterday, today Tráva went down to meet the rest of people, he is returning in the evening, tomorrow we want to CII. 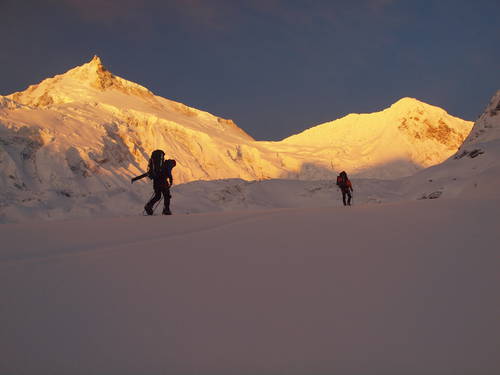 In the KTM / Kathmandu) grabbed me back pain - and quite hearty. On the eighths is hard to climb in bad bending over. But Kristina as a skilful physician and specialist in mountain medicine and altitude sickness provided me with a good pharmacy. She decided to investigate the influence of height on the individual. But she underestimated the Yeti element type, and so it now has first-hand. Anyway, during one of the waiting in the airport departure hall I completed the first part of this research to test how one becomes a mountaineer and climber due to the high altitude Dement (looks like closed circle). According to certain theories is due not enough of oxygen "death zone" irreversible changes in the brain. And so from is laboratory rat. Further tests I should do over 7000 m and than at home then have the rest of the gray matter. Original shape is detected by magnetic resonance and then is compared with reality. Meanwhile I was little (and thus perhaps) but attack me thinking strange thoughts as I walk up the most beautiful countries. 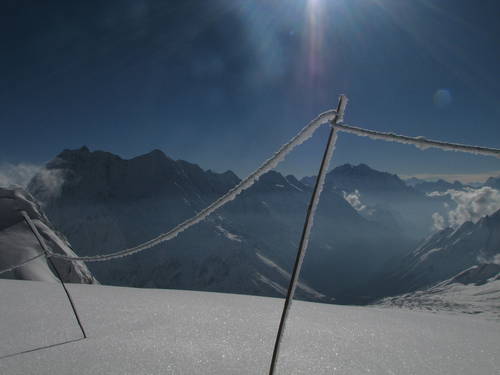 From Dingboche we climbed up the ridge, we read that it is visible Makalu from here - it was beautiful and I had the feeling that I saw an eight again that I had let up. And we saw the beautiful pillar of Czechoslovaks who's climbed one of the first output in the Himalayas. Hats off to you two guys! Then we ourselves three traverse on slope and it's really a great feeling high in the mountains. Freedom, beauty...! Eagles circled above us and somewhere up ...?

My backpack is a little heavier than I wanted, but due to x time of repackaging, I lost my secure container on my ThinkPad, I didn’t find the courage to give my notebook carriers after last year's experience. And because in addition to the things you and I bring food and sleeping bag, but a few pounds and takes photo equipment. Canon EOS600D with gray lens EF 70-300 are other delicacies are the extra load in a backpack. 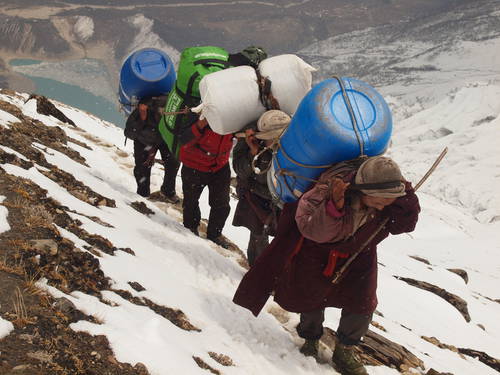 Today, unfortunately in BC when unpacking I found out that I had at home a card reader. And my little ThinkPad forwarding it to the big difference from what I have at home does not have. And of course the first time that I left home and all four wires from my Canon camera and the camera ...! Somehow I solve it :-)

Fortunately, I can recharge the batteries. I am incredibly excited new about the solar system

I'm going to walk to the icefall, send and write next time ...