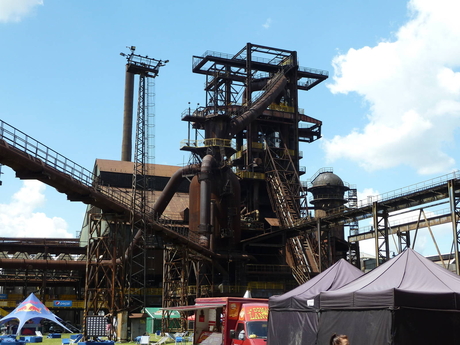 End station of the skip elevator is at the upper platform at 45,2 meters. There you get a nice overview of the steel monsters and how hard work here must have been. You imagine how complex system of traffic bridges helped to transport the so-called batch to the cylinder part of the furnace, or how burning coke created toxic and explosive fume of 500 °C which was then cleaned in the anther and wet tube. In the body of the furnace the melting material reached the temperature up to 2000 °C. Liquid crude iron was then let out and propelled. The blast furnace was walled with a heath-resistant material, and cooled with pressured water. Slag that appeared during combustion was let out to transport containers, and then processed as thermal isolation for construction industry. In numbers – to produce one ton of crude iron it is necessary to input 2 tons of iron ore and 0,6 tons of coke (to produce enough calorific value); 1 ton of crude iron produced about 800-1500 kg of slag. Workers faced working in high altitudes, heat, and smog. If you are not local, you will feel the heat when listening to the words of your guide. 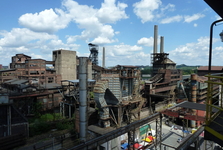 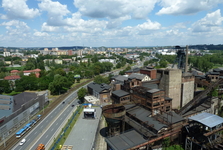 Those who are not afraid of heights can climb on a narrow yet quite comfortable steel staircase up to the service platform and further up to the VP1 tower at 60,75 meters. It is the oldest iron works, formerly known as Rudolph’s works, that upon its foundation in 1828 was named after its founder. There is the highest place you can get on your tour. From there you can see Ostrava from above. Back you go on your own. You can rest at stops upon consideration of your guide. More adventurous of you can go through the “adrenaline trail” – a high bridge connecting two distant construction. The tour concludes in the headquarters, a place where only one person worked. 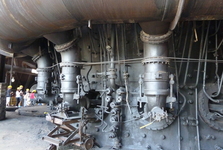 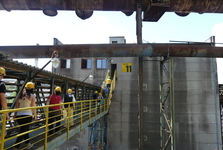 The tour takes 1,5-2 hours, depending on how many questions you have. I have to say, despite relatively young age of our guide, he answered questions as if he had worked there. Another places open to your admiration are gasholder (turned to a multifunctional cultural facility) and former headquarters U6 – today the world of technology. 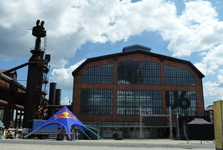 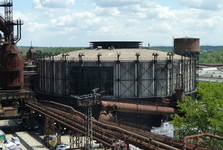 A city on the Czech-Poland border is famous for black coal mining. Until the present there are op...