The next day came for us Idong and went to traffic chaos 12 million dollar capital of the country that has 230 million inhabitants and 19th most powerful economy in the world. In the city we saw from both mycelium and poor hovels skyscrapers grow houses,

business and shopping centres. It was like a forest, where the dense ground of vegetation grows in the battle for the sun huge trees. Everywhere, in every place was teeming with lots of poeple, roads were enclosed by small shops, where there was at least a million. Sold everything that exists, in each of them were several people, and perhaps were open continuously. Finally, to close most or could not, leading them to the wall was missing. From the traffic chaos on the road is sometimes separated barely a meter and if somebody decided to create an additional traffic lane, and less. No order and we even witnessed a police disposal of such transactions in a single trip near the centre. Some of the local political leaders to put struggle with them to his voting program, that way Idong explained us.

Learning the history and local flavour

We visited the monument of national liberation is displayed stages of national history and a number of children. "Where are you from?", (Where are you from?) they were practicing their English. "We are from Slovakia," I have practiced it as well. Slovakia is that none of the nearby islands, it was clear to them now. But where it may be, it did not dare to argue. "Slovakia is a very small and nice country in the middle of Europe", (Slovakia is very small and beautiful country in Central Europe), I helped them. But I prefer them to say that the whole country has only 5 million inhabitants. After all, it was less than half the population of Jakarta. 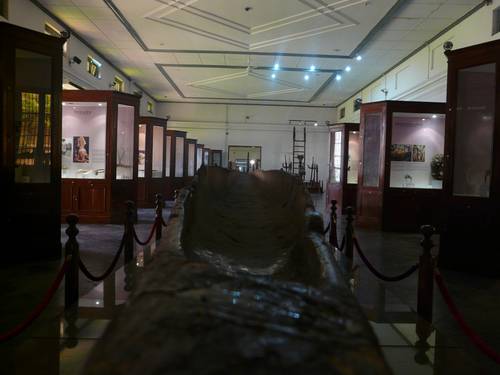 n the National Museum we have got the basic information about the country: 17 508 islands, 250 races and languages, 230 million people, which was for our local people unimaginable number. We saw the exposure, probably the most important of which was a boat from a tree trunk, through which all islands

In the harbour we saw that the cement is handled here by hand and then we visited Cafe Batavia, built in the colonial spirit of the main square of the colonial era. In the past, this square was used as a prison. The café was decorated with photos of famous celebrities who have visited it, including photos of Vaclav Havel. We had Java coffee there and we tried for a while feel like colonialists. Janka in her hat greatly resembled these times. 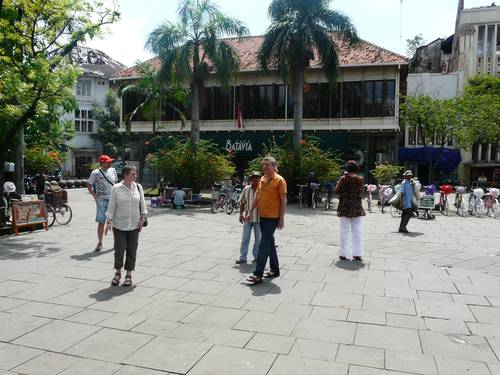 In the evening we went to dinner to a nearby restaurant. We had excellent local food and we understand what means the hot peppers. They gave us as an attachment. We took a piece of plate and eaten with caution. We knew what we expect and some hot peppers really disappoint, were really hot. Same as in our country. Nothing special. Special but it has become that burning sensation is gradually wasted, on the contrary. We understand that the local hot peppers are a time bomb. Burning sensation continued, was still louder, and the sweat break out on the forehead. There was no escape from that, we did not know where to stick your head what to do. Finally, we survived and since then we had them really respect.

What we experienced and saw during a trip to Bandung, you can read  in a week.