en.infoglobe.cz » Do You Know That? Unknown America III. 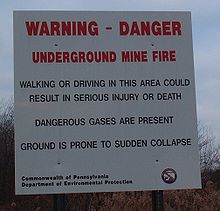 Quiet life in small-town on the northeastern coast of the United States, whose history dates back to 1841, turned the moment into a relatively wealthy coal turf arrived group of engineers and geologists to establish the first mining company. Centreville, the first name sounded newly established mining settlements. This name was still growing village until 1865. As more and more administrative errors occurred because of confusion with identically named town in the neighbouring county, it was necessary to change the name to Centralia.

Mining companies, there were up to end forced labour in the early 70 years when most companies went bankrupt or were immediately threatened by extensive mine fire, which we 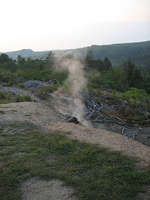 shall now give. The whole disaster was the cause of a certain laziness of the local population and scavenging garbage in most years, which ended in the shaft, respectively open pit mines of the unused one. The traditional method of trash disposal, their burning, was in 1962 out of control. From the fire in one of the caverns flared and waste residues antracit - the coal mines, which also non mined residues and coal reserves and created highly flammable coal gas. Disaster in the form of the mine fire was not long in coming. The culprit was the lack of fire-resistant form of special measures in the wall separating the landfill and abandoned mining areas, which are as endless labyrinths intertwined under the homes of more than 1500 citizens of town of Centralia.

All subsequent attempts to extinguish the fire is still growing and the city ended in failure with the increasingly annoying was cloaked in a cloud of toxic fumes, which coined the way to the surface every nook and cranny of the city undermined. Since 1979 he has been living in this place almost unbearable. Poisonous fumes of carbon monoxide and dioxide, slumping to the ground and soil temperature only a few centimetres below the surface of almost 50 to 70 ° C. The whole horror of the crisis culminated in the events of 1981 when the 12-year old boy opened the 50-meter pit of 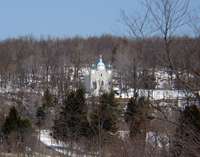 hell and only a miracle, respectively by the help of his cousin, wasn´t lose the young life. This incident prompted authorities to resolve the whole case Centralia forever. In 1984, Congress allocated nearly $ 50 million to relocate the entire population in the nearby towns of Carmel and Ashland. Several families, however, still have not left their homes. The journalist David DeKok of Centralia wrote this: "It was a world where no human being could live. Hot as the planet Mercury, a poisonous atmosphere as Saturn ... "In 2009, the formal removal of all remaining residents, but still lives here voluntarily about 10 daredevils. Houses are demolished or themselves gradually and fall gradually burn down. One of completely unspoiled places the local church is standing on the adjacent hill, where he serves as regular mass.

Centralia is the way one of the most spectacular places and the U.S. is difficult to assume what will be its fate. It is assumed, however, that fire burning out progressive and coal beds will last another 250 years!

Frightfulness of strange and stifling atmosphere became a theme of many novels, short stories and movies specifically, whether absolutely or only indirectly, as it was at about the most famous rendition of the dead in grim horror and video game Silent Hill. Feature ghost towns and especially in American sci-fi literature comes from the town of Centralia. And no wonder ... Hey, this is definitely not a tip for a trip!