Published: 29.8.2011
One of the interest sights of the northern Italian Adriatic coast is the historical town, called Aquileia. If anyone thought that is where the known brand of drinking water, he is wrong. The only thing what joint together these two signs is the eagle - Aquila in Latin, what you can find in his symbol.

Aquileia (don´t be confused with the town Aquila in Abruzzo area in middle part of Italy, which is located 100 km from Rome, and which was in 2009 destroyed by earthequake) is a small town with 3 thousand people that regardless of its size, attract for thousands of tourists and also scientists every year.  That is one of 45 Italian sites, registered in UNESCO (as a location under the name Archaeological Area and the Patriarchal Basilica of Aquileia). The town belong to the province of Udine geographically and also to the Friuli – Venezia Giulia. From the city is about 24 km far away to the southeast and on the map you have to find it near the river Natissa closer to the city Grado, which is situated on the shores of coastal lagoon (Laguna di Grado).

The most important monument of town is the patriarchal basilica, but also many archaeological sites in their territories, on which historical research still continue. According to the find from past there existed Celtic settlement, where later - beginning of our era - was built a sort of frontier fort. Good location near the sea and also on the trade routes leading from the Central and Eastern Europe to Rome as a main centers of Antique world, was a guarantee of rapid urban development. They say that is the business is facing the famous Amber Trail from the Baltic Sea and this, than time luxury – a city very often welcomed guests from highest royal and religious society from territories in Central and Eastern Europe. This city is therefore known in relation with Christianization of Europe. 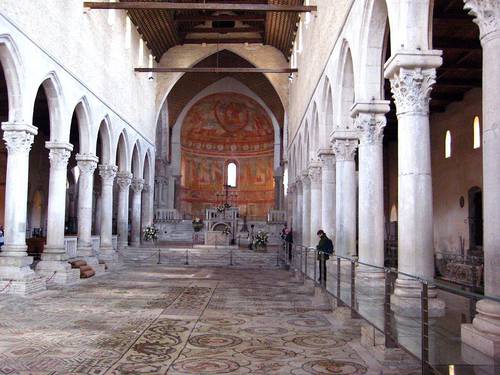 On the ohter hand, there is place where went the struggle for power in the Roman Empire, but mainly against the enemies, who soust to plunder the wealthy city. In the neigh

bourhood of city is the place, where apparently fought the troops of Emperor Marcus Aurelius with Barbarian tribes, which can then chase up the Danube. Excavations shows that the city was destroyed few times, and although the local people recovered it, gradually lost its beauty and meaning. They say just an attack by Hunn fighters with leader Attila had a effect that some people escaped to the accessible lagoons futher to the south and where founded Venice, today much more famous place.

Patriarchal Basilica is a testament to the glory and prosperity of the town in the first millennium. Another testament is about the development at the time can be also excavation looks like big Antique buildings like the Amphitheatre (Roman Forum), equestrian oval (hippodrome), spa and the preserved antique Roman tombs in the cemetery (Sepolcreto Romano). Also mosaic tiles former palaces and houses or remnants of the port, aqueduct and city sewer. Although the current form of patriarchal basilica dates from Great Moravia empire, excavations and the old chronicles say, that a similar structure was already there before ages, reportedly even it was the first Christian basilica, built by permission of Christianity (so called Edict of Milan in 313)

When visiting the town, indeed main sights – the Basilica and its surroundings, is worth visiting

the museum dedicated to the history of town and Christianity, especially excavation (Museo Archeologico). In the neighbourhood of Basilica you can visit the bell tower overlooking the surrounding cities and also catacombs Cripta degli Scavi with monuments from early Christian times – them belongs on of museums Museo Paleocristiano in a former monastery. In Basilica, which is considered one of the largest buildings of its style in Italy, are music (especially organ) concerts. Some areas with Roman monuments (Roman Forum and its surroundings) are in time archaeological work closed for public. 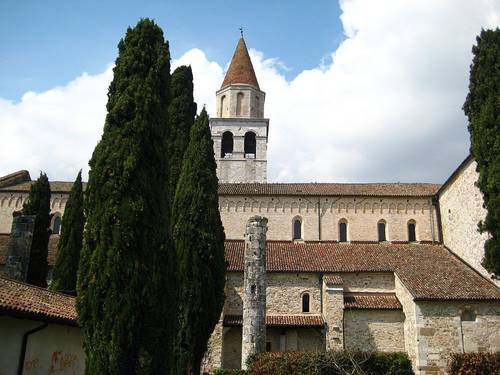