The Capitalism is a struggle. In past, the people moved to towns, at present they leave it. But, to tell the truth, it is impossible to avoid it. Great cities, and Prague first of all, are offering a lot of possibilities, starting with wide labour market and finishing with endless social activities. However, local inhabitants as well as all immigrants (or „alluvial deposits“ as the new Prague citizens are nicknamed) are forced to pay for rather high tax: i.e. polluted atmosphere, endless time period, spent in traffic jams and last but not least, higher life costs, of course.

So, smaller towns, such as Roztoky, could be for the people, whom is harmful speed way of life, noise of trams or sounds of motor vehicles, an ideal refuge. Anyway, these seats are becoming much more populated, taking the concentration of persons to these localities. So, building enterpreneurs (developers) construct new houses on fields where the maize grew recently. 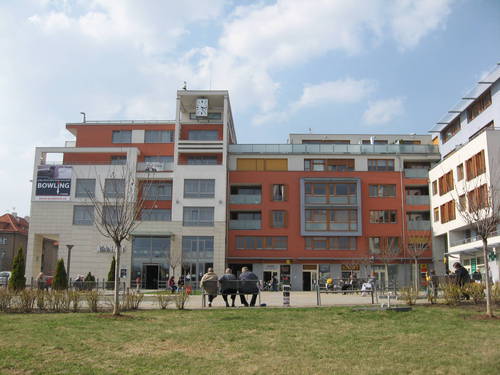 Main square in Roztoky is very modern. Nothing remained there what could remind small town. Maybe, it would be a pity. It would be hard to imagine such immense glassed buildings in the future. But now, it has no sense to make some future pictures. Roztoky will become Prague quarter, where the underground line will be constructed and tram lines will be terminated there, who knows?

Peniciline  Factory and  a Castle

These two constructions have nothing common, and nor there is anything which could connect them, as it looks like similar, from the first point of view. Peniciline factory, including its „tower“, is placed close to the castle building. The contrast of castle tower with some object which looks like a work of modern art (fullfilling its important industrial task at the same time) would be attractive immediately for everybody. This peniciline factory, later known as Reserch Institute of Antibiotics and Biotransformations, has its seat in Roztoky just since 1948. 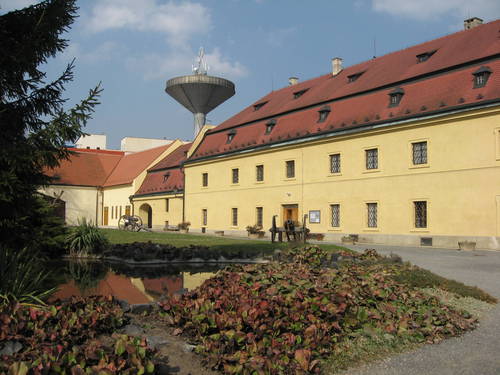 On a place, where Roztoky Castle is situated, a water stronghold was built in 13th century. Its owner, Davide Boryna of Lhota, let it re-constructed in 1565 to Renaissance face, including arcade gallery. Even Liechtenstein Parentage had this castle in possession, after White Mountain Battle (1620) and administrated it for rather long time period - till 1803.

However, hard time came within 1920-1930. A group of enthusiastic patriots took charge of the castle. They created there a museum, which is functioning till now under the name „Central Bohemia Museum“. Another negative influence came during big inundation in 2002 where not only the castle but also peniciline factory, suffered from big damages. 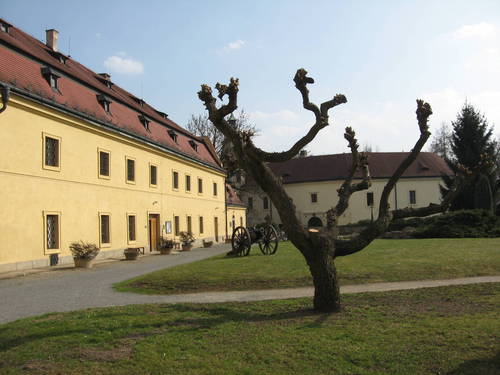 Roztoky from Cycling Point of View

Roztoky presents rather easy target for cyclists, coming from Prague. You can reach the town, passing cycling route along both banks of Vltava-river. The way along right bank could be rather more advanturer. You are forced to be transferred to the opposite river bank by ferry.