From the first view, Hluboká, as a town, is no special locality. On the other hand, local people are accustomed at crowds of tourists, arriving there in numerous groups every day. Even on Mondays, when most of Czech castles are closed. Hluboká Castle is worth to see even during days, when the gates are closed.

Parking so busy as in Prague Ruzyně Airport

Monday - closed, car parking is open daily. A man, dressed in orange reflex waistcoat drives on bicycle through the street, where the tourists are parking frequently. As soon as he saw a driver who just arrived and draw hand brake, he approached  quickly, asking for a fee of CZK 100. So, the price for parking is the same as in case at Ruzyně Airport. Never mind, he is accustomed to accept the astonishment and surprised faces of this driver. As the only defence against objections, regarding really high price for parking, is an argument that the unit price would be valid for the whole time period of parking there. Local councillors know well what is exactly the tourist movement like. 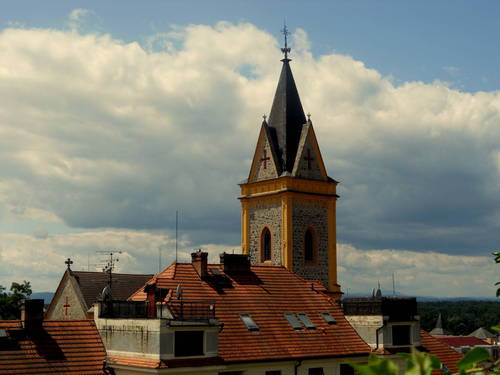 So, after negative surprise, regarding high price for parking, so called castle routine follows: you have to overcome a hill, leading to the seat of nobles. Nevertheless, in case of Hluboká, it is no violent or dull climbing but a pleasant walk. The wall which borders a way upstairs, is offering, by means of some slits, the outlook towards the town, surrounding nature and Bezdrev-pond, the giant among the ponds, the second biggest water reservoir of Bohemia.

A place where the cultures mixture

The castle with its snow-white walls is full of nearly all languages of the world, from American English, Portuguese up to Russian. Even the Czechs visit Hluboká, of course, as this is one of most visited monuments, and they are proud on this sightseeing, coming from the middle of 13th century. On the other hand, the foreigners  compare Hluboká, similarly as Český Krumlov or Prague, to buildings and atmosphere taken from Walt Disney fairytales. 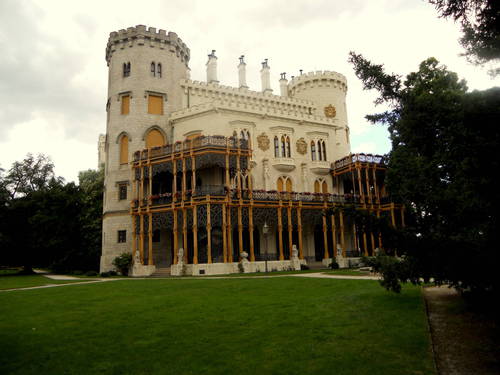 In front of the gallery, a statue of Mikoláš Aleš, a painter, being famous, first of all, through his drawings of Jan Žižka of Trocnov. This artist from South Bohemia is well known idea for each small child, as local picture and statue gallery bears his name, situated, since 1956, in spaces of former castle riding-ground. To tell the truth, Hluboká is a right place for art.

Hluboká Mansion House is originally old castle, probably let to be constructed by King Přemysl Ottokar II. At that time, the fortification named as Froburk, the nickname Hluboká got the complex later. The reason for it, it was deep well, which was placed not far from the citadel. Nevertheless, some sources mention that the expression „Hluboká“ could symbolize a depth, where Vltava-river was cut into, or deep forests in outskirts, where the rich went frequently for hunting. In general, the right reason for such name could be explained really in different way.

With Hluboká, two famous aristocrat parenteges are firmly connected. The first one, Vítkov Parentage,was dramatically represented by Záviš of Falkenstein. This person was executed at castle environs. According to the legend, a woman, money and power were the reasons for such act. The castle, situated above the river, where such incredible stories occured, and changed several proprietors, was subsequently modified to Mansion House. 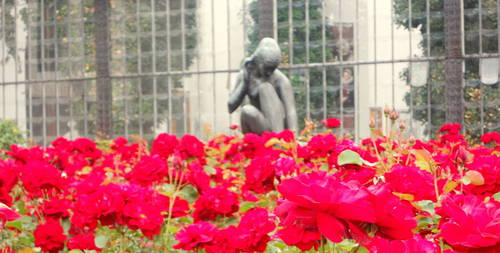 Later, during 18th century, Schwarzenberg Parentage let to change the building into Baroque style. And within 19th century, another essential modification was effected Prince couple, John Adolf II and his wife Eleonora, made their excursion to England. And this was a reason of the second, basic reconstruction of Hluboká Castle. The princess was fascinated with Windsor Castle, and desired to have something similar in Bohemia. So, at that time, Hluboká nad Vltavou got its today´s romantical face, in a style of Tudor Gothic.

However, last reconstruction  served violent critical wave but also the acceptance, full of admiration. No wonder, this happens always when something original is created. Anyway, it is important that Hluboká Castle is existing. Thanks to its presence, we can admire a skill and preciseness of masters of architecture at that time.

Not only the castle is alluring the tourists. Even rich sporting activities, such as golf, horse riding, walking, fishing or cycling, all these activities are very attractive. Small foot excursion (only two kilometres distant) leads you to Ohrada Castle. It is extent Baroque complex of Bohemia and the oldest hunting museum of the world, at the same time.