A chateau is situated in the center of the town of Brunal. It was built in the 16th century. Its ground plan is of somewhat of a circular shape. The inner part sees double-decked arcades while the front of the chateau has beautiful Baroque portal and façade. The belfry is over 60 meters high. Its most valuable interiors are year-round open. Therefore, a tourist can walk through the chapel an halls at the chateau. The latter are decorated with Rococco wall paintings and original furniture. Everybody who loves romance of chateau parks will love this place. Former brewery rebuilt to become a sala terrena, statues, lake, the residue of town fortification, bastions – these all features make this feast for the soul, and nerves. 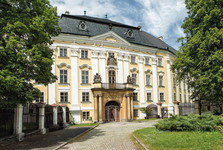 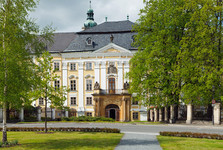 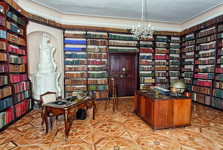 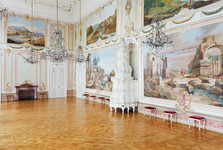 There is the huge Sovinec castle 30 kilometers southwest from Bruntal. It is situated jsut above the town of the same name. You can park you car in front of the castle. However, we advise you to go along the tourist marks starting at Resovske waterfalls. The Huntava river streams over the rocks which creates a cascade making it the largest waterfalls in the Jesenik. The entire locality is a national nature reserve. The trail up to sovinec goes through forest. It is great to breath the air here. After all, the Jesenik is well-regarded breathing spa. Near here, chronic lung diseases have been traditionally treated. 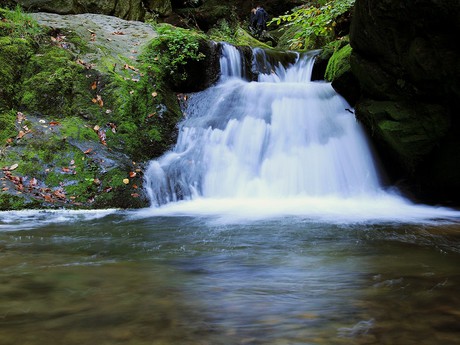 Do you like to walk underground corridors? There is a surprise at sovinec. This year (2016), 80 meters of underground corridors were opened to the public. One possibility is to walk them with a guide. He or she would also guide you through bastions, zwingers and entire castle fortification. You will learn everything about the history of the castle. Believe us - there is something to hear. The fortification and the underground spaces is there for a reason. The castle was founded as early as the 14th century. There were many fights over it. The Teutonic Order owned the castle in the times of the Thirty Years War. However, the Swedish army captured the castle. For seven years were the Swedes the lords of the castle which was one of the three main Swedish forts in Moravia and Silesia (adding to Olomouc and Unicov). Also, you will learn what the Swedes left here plus you will learn some interesting facts about the castle. Children of less than six years of age shouldn´t partake at a tour. At a tour you will learn a reflective vest and a protection helmet. This equipment is going to be supplied at the cashier´s. 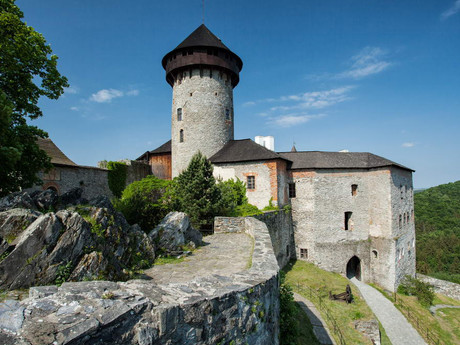 Many legends have been told about the castle. One tells about loud cry of horses and rattle of armor. No person that would stay there over night would withstand such noise. Also, there is niche where two skeletons were found which were walled in. An uncle of a girl who was married to an older man hid her there. Once the angry husband caught her he made his cruel revenge. Be not surprised. These were the Middle-Ages. 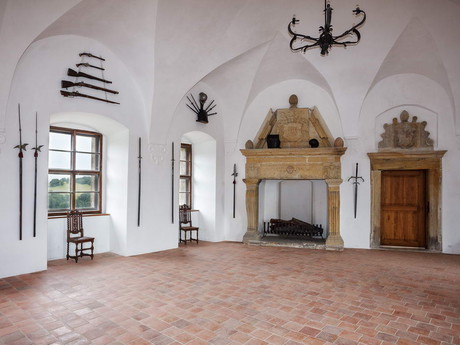 Various interiors with furniture are also opened to the public at Sovinec. The Knights hall, torture chamber, or themed exhibitions widen the knowledge of the visitors on history and the life in the MIddle-Ages as well as the art and crafts. 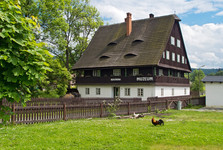 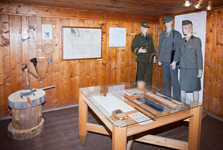 Speaking about the crafts:

Should you be interested in etnography then you must see the building of "kosarna" in Karlovice. This is an exceptionally preerved building built in around the year 1600. It is of typical architecture for the area. No other building except for "kosarna" has survived. The kosarna is now a property of the Museum in Bruntal. Inside, there is an exhibition on rural living and forestry.

Published: 18.10.2007
The town of Bruntál was established in 1213 by Margrave Vladislav Henry. Till that time-period North Moravia was not practically colonized and Jeseníky Mountains offered its wealth in form of precious metals. Thanks to this fact, the town got rich and since town´s foundation, Bruntal´s citizens had a miner in its escutcheon.

Published: 10.10.2007
Jeseník is a Silesian town in northern direction of Olomouc Region, situated on confluence of small rivers of Staříč and Bělá. In the past, the originally inhabitants were mostly German, from this reason Jeseník was known till 1947 as Frývaldov. The town is placed in Preserved Protected Area of Jesníky.