During the last November weekend in Tatranská Lomnica happened a convention devoted to all who love mountains and nature. Infoglobe staff was there and now we will try to share with you our experience from the visitor’s point of view.

Friday Evening
Our staff arrived at the festival minutes before the official opening. The pleasant atmosphere of “mountains” in a pension chosen for this convention was only improved thanks to the contesting photo exhibition. There was prepared a great hall with many chairs, visitors were talking to each other and, of course, music nicely filled the whole space. All of a sudden a official launch of the festival begun and authorities opened the festivel in a very gallant style. The program subsequently continued with a launch ceremony of a new publication Observation Towers by Ladislav Khandl. The launch was to its core held in Tatranian spirit. The book was “baptized” with a true spruce branches 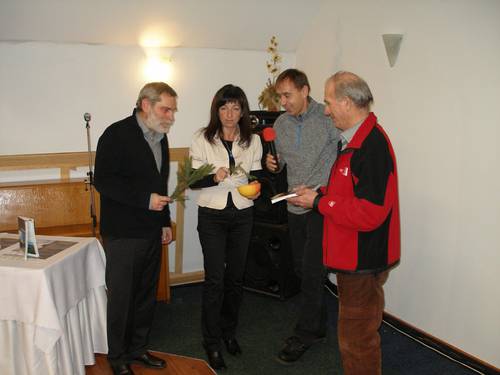 After a short break, the convention resumed with an interesting guest. Organizers invited a famous Slovakian mountaineer Michala Orolín who has experiences with hundreds of climbs in Tatras and other mountains. He traveled the world for his love – mountaineering. He climbed up on Alps, Caucasus Mountains, Pamir, Patagonia, or Alaska. In case of many conquered peaks he managed to climb it for the first time. After approximately one-hour discussion and storytelling we, as the visitors, were given two options. First, we could stay where we were and enjoy upcoming screening of amateur contest movies on mountains. Or, second, we could move to the next room, where was about to start another screening of Slovakian premiere of the Czech TELEfilm from which we could learn something about history of telemark skiing. What do you think? What option did we choose? Both! After a premiere there subsequently continued screening of non-contesting outdoor movies. Our Friday evening thus ended after midnight. Having great expectations in the following festival day we moved to our hotel to get some sleep.

Festival Saturday
Morning was hard and cloudy weather didn’t add to our mood. Still sleepy we went to get some breakfast that gave us energy for the second day of the festival. We were hard pressed to attend literary breakfast, since they started already around 8:30am. We barely took our seats and the program for today begun. The start was a bit sad. Hosts together with a festival guarantor Mrs. Marta Rybková remembered a long-time literal guarantor of Horalfest Mr. Hudák and they also remembered a long-time visitor of the festival who came from the Czech Republic - Mr. Otípka. Unfortunately, these people passed away. After telling their bios the festival continued with the reading of their works. To be honest, eyes of everyone were in tears. After the sad beginning the program continued with a workshop where contesting publications were analyzed and drama reading. At the end the overall atmosphere was so relaxed you can hear spontaneous bursts of laugh. Cheered we moved to a next room where a photoworkshop had just began. The guarantor Tibor Škandík explained to about 50 photographers the rules how to make correct composition, focus etc. That concerned exhibited photos and for many times he faced opposition from the authors. It was very interesting to watch this. We took home some photo-guides and advise. After a half-an-hour we moved again, now to attend a last workshop devoted to film. After screening of short movie samples there continued a very interesting discussion (for us amateur) with a film guarantor Mr. Ivan Brachtl. With new knowledge and maybe also skill :- ) we headed for a lunch. 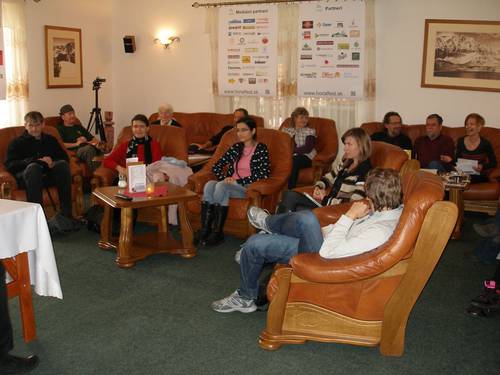 When we replenished our energy supplies we split. My colleague moved to Rainer Cottage where the organizers prepared a toast with the owner. I gave a preference to the afternoon screening of non-contesting movies on mountains. When the clock hit four o’clock, the audience suspiciously changed. Younger people replaced older people sitting in the first rows. When I looked in the program, it was suddenly clear to me why. At four o’clock begun the second Slovakian premiere of the movie Where the trail ends on biking.

The Evening of the Winners
We met again with my colleague for a dinner. We had told each others our impressions and quite quickly moved to the great hall where the ceremonial evening of the winners was starting. The room had been overcrowded and many hadn’t place where to sit. Nevertheless, it made the atmosphere only better. After the festival theme song there began handing over of prices. First, in the literature category first prize went to Andrej Tymko of Poprad for his prose "The hard life of a bear ",. In the category for the best photo won Ivan Kenéz of Ružomberok with his photo series called The High Tatras Metamorphosis I. – III. . In the last category – the best movie – the first place won Petr Uhrín of Martina for his movie Kamchatka. Besides the main prizes there were also the prize of viewers, of cottager, and certificates of merit. Singing and guitar playing interrupted the program by a brilliant perfomer Edo Klen. An intense applause and a short demonstration of their work 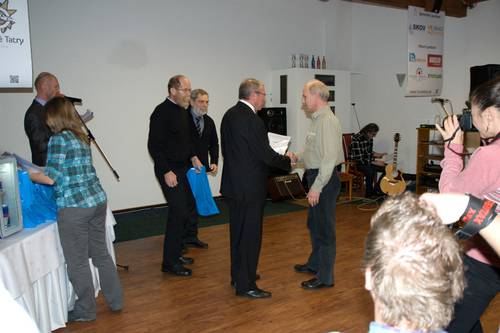 At the end of the festival the visitors (including us) were pleasantly surprised when the organizers announced the afterparty. The mayor of the town of High Tatras Mr. Ján Mokoš and the director of the festival Mr. Stanislav Klaučo gave their speeches. With a glass of a wine in our hands we listened and applauded to a great experience we had with this festival. Then we continued to eat some of prepared snack. After the snack there was waiting for us a thrilling raffle :-) We hadn’t won, however, we had many wonderful experiences and impressions. Most certainly, we look forward to and won’t miss this festival, which will come in two years. 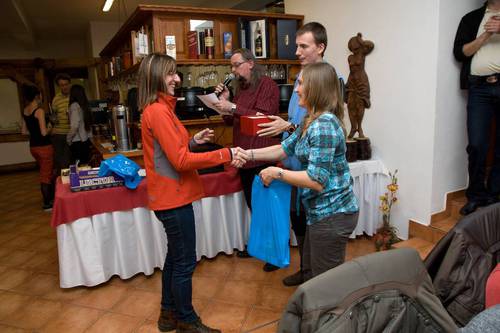 You can look at awarded works atwww.horalfest.sk

Published: 28.11.2021
The Infoglobe portal is organizing the fourth year of the international travel festival infofest, which will take place this year only in a virtual form.

Published: 7.2.2018
We bring good news for every smartphone user! Infoglobe has just released a new mobil app which will guide you to the most interesting places on our planet and by detecting your location it will suggest you trips.