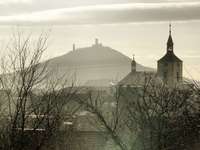 Most of trips to středohoří begin and end on the Lovosice train station only few meters from not particularly romantic bus station. Food and drink supplies can be replenished in an adjacent shopping center, if you want. Others were on the lookout for a bus on direction to Třebenice, this route used to connect Třebenice with Lovosice and other towns of středohoří by a regular railroad transportation until recently. This track that connects Terezín, Litoměřice with Lovosice and Most has its nickname, as it is usual in the northern parts of the republic, Švestková dráha (Plum railroad) due to the fact it was lined with many alleys and orchards. The track was built in the end of the 19th century and operated until the year 2007 when its regular traffic was ceased. The group of town however, looked at this decision with displeasure. Only hard work of mayors and citizens resulted in partial restoration of the railroad, at least for weekend/holiday rides that take part every summer since 2008. 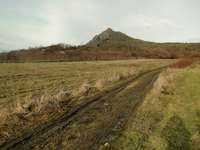 The operator of the railroad is the Severočeské dráhy company, which has insufficient funds to cover a whole year working of this and other interesting railroads of the Ústecký and Mostecký regions. We will inform you about this very interesting railroad! Now we will return back to the Lovosice bus station, or to a bus station in Třebonice 5 kilometers away where a walking part of our trip begins.

We are welcomed by Třebenice, a historical town that has a Czech garnet as its symbol. There is also an exhibition in a museum about this stone with various jewelries, accessories and presentations of the history of extraction of this shapeable mineral. The museum is opened from April to October and the entrance fee costs around 30 CZK/person. 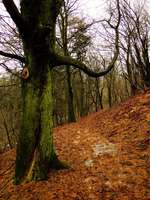 The town is also known for its priceless art, a hymn book a Mass hymnal of Czech cantoria of Třebenice . Almost 40 kilogram beautifully illustrated medieval song book by Matouš Ornys of Lindperk consists of more than 490 parchments with 29 illustrations that complete poems and psalms on every religious holiday and celebration of the whole year. Estimated cost of creation of this work of art made in 1574 - 1578 are 623 heaps of Meissens, a price you would pay for about 5 farmsteads. Today the book is secured in a safe of the Litoměřice archive and it leaves it only in occasions of local celebrations and holidays.

that were opening in the evening hours. The main goal of this trip, the ruins of Košťálov castle, is accessible via a green route I found quite useless since the structure, a rocky projection with the ruins of the medieval fort, is clearly visible. From a lonely train station there is ascending terrain beyond a two-line road. We went along a drenched pathway, nothing amusing. All kinds of gardens, cottages, sheds were followed by mixed forest and a final ascent to a rocky peak vrch Košťálov (481 meters above the sea level), which gave the name to a castle built in the second half of the 14th century. On your way we feasted our eyes on panoramas. We recognized few peaks of the České středohoří on north such as Lovoš, Milešovka, Hradiště and others. On south there is Polabí with which is in a sharp contrast a mountain of conical shape with Házmburk Castle.

The first written note about the castle comes from 1372 however, its early history is kind of a mystery. The first owner, dynasty or administrators of this dominion are unknown so only fragmental information tell us what was the purpose of Košťálov

and who used it. Another note about the castle comes from 1422, in that year the Hussite army camped beneath the castle. The Kaplíř dynasty, lords from neighboring Třebenice, appeared for the first time in that time. They used the castle with up to three storeys as their residence. Only upper floors were inhabited as well as lower buildings and agricultural facilities. The castle was basically unoccupied from the second half of the 15th century. A chronicler V. Hájek of Libočany had a story of his own about the history of castle that is appealing perhaps but it is fiction. In the year 1622 people speak of the castle as of a deserted castle. A romantic soul of Karel Hynek Mácha was enchanted by this castle and he also made it immortal on its well-done sketch. We can see the castle also on Emila Filla’s, a painter and graphic artist, the České středohoří series of paintings.

From the architectonic point of view, it is a donjon castle, it means an inhabited guard tower that creates an axis of originally three-storied castle with a knight’s hall. To this day there is apparent an original wall decomposed by the passing centuries.

Well, lets be amazed by vast panoramas. Next week we will continue in our journey to a smoking Borečský peak.