Monastery of Discalced Carmelite with the church of St. Benedict - the first kept mentions about the church date back to in 1353. Over the ages the church was rebuilt many times and in the middle of 17th century it was added to the monastery built on the spot where once stood the house of the Czech humanist poet Bohuslav Hasištejnský of Lobkowicz. The monastery was originally a Carmelites and Barnabits to get him up to nearly 150 years later after they were driven from the Malá Strana. Currently, the only church is open to visitors at a time of worship. 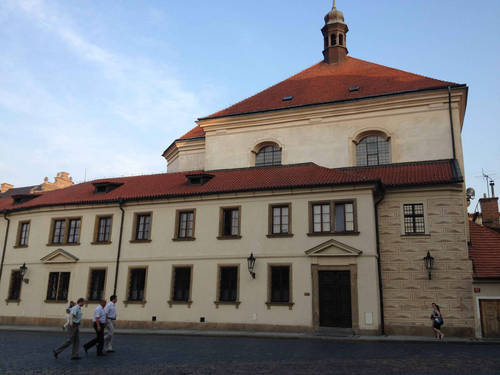 The magnificent baroque Tuscan palace decorated western side of the square. With the idea to build a palace in the place where stood originally town houses, came in the 17th century Count Thun. Construction began in 1690 and in 1718 fell into the ownership of Anna Maria Frances Duchess of Tuscany, after which he obtained his name and has been completed. Since the beginning of the 19th century until the end of World War II the building was owned by the ruling family of the Habsburgs. After the war, the palace became the property of the Czechoslovak state, which was began to use for the Ministry of Foreign Affairs and also serves the same purpose today. In the second half of the 90 years underwent reconstruction of the palace and the public can attend the ground-floor rooms, where from time to time held various social events.

The part of northern side of the square is Martinic palace named after the Jiří Bořita of Martinice, who in the late of 16th century began to build it there. Until 1799 the palace belonged Martinicům, at the time it acquired Joseph Weitenweberová that it had designed rental apartments and a police guard. To the 60th the 20th century palace was greatly decayed. Only then began its general reconstruction. Today, the space rented for various social events such as weddings or conferences. After agreement with the administrator you can organize group tours of this beautiful historic building.

Together with Martinice palace forms the northern side of the square also Sternberg Palace with the construction of one of the most important secular Baroque works of noble family Sternberg started in the 1698th. Painted the interior of the palace took charge of such names as former art world Michael Vaclav Halwax, Jan Rudolf Byss or Matěj Nettel. In the 30th of the 19th century was the completion of the south wing of the palace and at that time also found the exhibits of the National Museum. From 1918-1947 Sternberg Palace served for army and the Castle Guard and only after 1947 became the property of the National Gallery.

Visitors can see the exposure time of ancient Greece and Rome, the works of French, Italian, Spanish and Dutch masters of the 16th - 18 century as Tintoretto, Rubens, El Greco, Goya and Van Dyck. On the ground floor of the National Gallery exhibit of German and Austrian painting of the 16th - 18 century, which are represented by the work of Lucas Cranach, Hans Baldung or Dürer Albrecht.