en.infoglobe.cz » India: New Delhi – A Memory of the British Empire

It was founded hundred years ago, in 1911 in the time of the coronation of George V, the king himself laid the foundation stone. The architects of the new city were Edwin Lutyens and Herbert Baker, prominent architects of the kteří ve své době patřili mezi přední architekty British empire. The construction began after the end of the Great War and was finished in 1931. Architects planned the city to be an administrative center that would represent the might of the empire. New Delhi was built along two major boulevards. The first, Rajpath (The King’s Way) is lined with two large parks and water channels. On the one end the boulevard end with the India Gate, an arch of triumph we know in Europe. The building is a memorial of the 90 thousand Indians who died in the Great War and the third British-Afghan war. The other end of this monumental boulevard consists of the Rashtrapati Bhavan, the residence of an Indian president. The main building of this 130 hectare complex compounds of 340 rooms in front of the main gate there is a large courtyard with the Jaipur Column. .

The second Delhi boulevard, Janpath (The People Way) is known for the Palika Bazaar located beneath surface of streets. You may find there more than four hundred shops and it is always overcrowded. Except traditional goods people can buy there goods the character of which is rather illegal. Except this the boulevard is lined with commercial buildings and the Janpatha Bazaar where are cheap souvenirs, Indian fast foods and various hand-made items.

New Delhi is a multicultural and modern city today. Among its most interesting features are fests and holidays such as Diwali or Maha Shivratri (a Hindu holiday devoted to Shiva ). In New Delhi there live 380 thousand people. 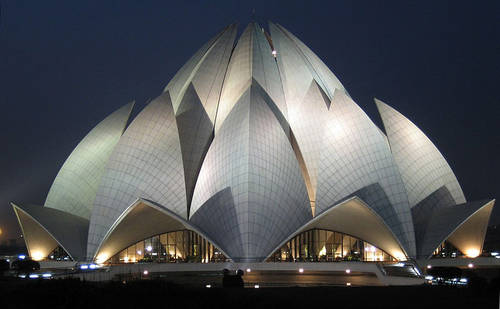 Among tourist attractions there are, for instance, the Lotus Temple which was finished in the second half of the 1980s and today it is even more visited than the Taj Mahal. Another sight Gurudwara, a Sikh temple on the grounds of which there is an artificial pond, school

or art gallery. Perhaps, the most lively place in the city is Connaught Place that constitutes of a large circular square in its center. One of the most interesting places is Akshardham. It is a Hindu temple complex that has been opened since 2005 and it reminds visitors of Hindu and Indian culture. The main building of the complex is 43 meters high, 96 meters wide and 110 meters long.

Hamuyan’s Tomb is another place indicating that it New Delhi is worh visiting. It was built in the end of the 16th century of red marble; it is the last place of rest of Emperor Hamuyan. The tomb was later a a model for the Taj Mahal.

The typical New Delhi’s climate consists of long and very warm summers (average temperatures are around 35 degrees) and short, calm winters. Lately, New Delhi hosted the Commonwealth Games where more than 6 thousand athletes participated (in the Olympics in London there were 10 thousand).