en.infoglobe.cz » Spain, Ronda – A City on the Edge of a Cliff 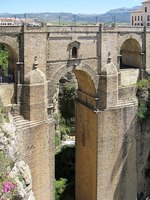 spectacular piece of architecture. It was built at the end of the 18th century and, as you can see on a picture in this article, it is a splendid example of the craftsmanship of the time. The bridge is 70 meters long and spans across El Tajo gorge, almost a hundred meters above the ground. The Puente Nuevo, or the New Bridge, links La Ciudad with the old Moorish quarter, El Mercadillo and the modern part of the city.

When you walk across the bridge, you will surely enjoy wonderful views down the gorge and also into the wide surroundings. On the other hand, if you walk on the trails leading through gorge (going through the longest one will take you about half an hour) you will certainly pull out the camera and you'll strenuously try to capture this fascinating work of human skill.

Now, let's take a look at the town itself and at its most important place situated in the El Mercadillo neighborhood. As we mentioned above, Ronda is known for bullfighting. The place that is associated with this controversial "sport" the most is the Plaza de Toros. Francisco, Juan and Pedro Romero are one of the most famous matador players since they laid the foundations for today's bullfights in the 18th and 19th centuries. 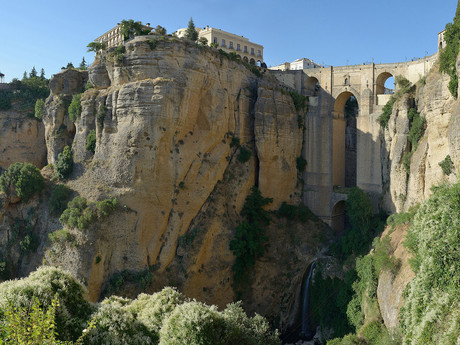 In this context, we must mention Ernest Hemingway and his book Death in the Afternoon. It is not a work of fiction as you would have expected, but a non-fiction piece. The topic of the book is bullfighting and everything related to it. Hemingway himself visited about 1500 bull fights so you can expect his view to be quite elaborate and interesting to read. 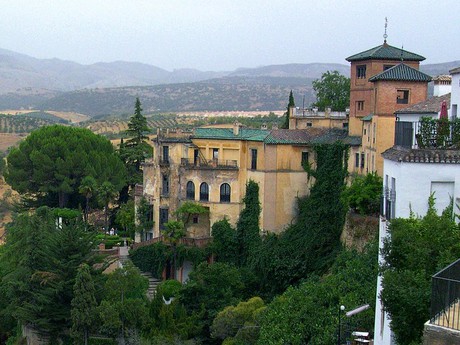 In order to get you closer to Plaza de Toros - it is a monumental arena with a diameter of 66 meters. The circuit consists of 136 Tuscan-style columns that support 68 arches. The arena was built just a stone's throw away from the Puente Nuevo in just six years and between 1779 and 1785. Today, bullfighting takes place here only during the Pedro Romana festival in September. If you do not have time to see this, you can at least go to the Museo Taurino, which is open all year round.

Last but not least, we will visit a hidden treasure - the thermal baths that built the Moors between the 13th and 15th centuries. They are actually the best preserved baths of its kind in Spain. Baños Arabes, as they are called, can be found near the Puente Viecho right at the outskirs of La Ciudad district. The baths are very similar to ancient Roman baths. It includes everything - a cold, warm and hot baths. Architecture itself is typically Moorish. Unfortunately, people may bath there no longer. You can see it only as a tourist.

So are you ready to visit this less known piece of Spain?