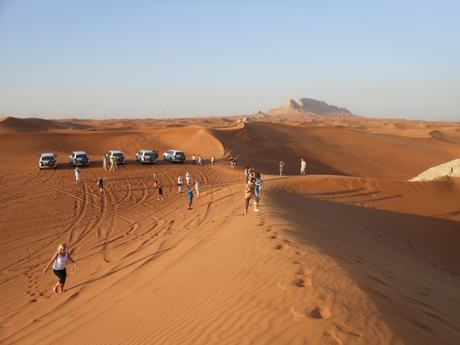 A trip to a Bedouin camp. We rode camels in something that looked like a caravan. Then we went to the camp. We were offered dates and tea with milk, or coffee. We could smoke the water pipe, or have some henna tattoos painted on our arms, as it is a common practice for women at weddings. We were about to experience the best thing of all. It was up on dunes above the camp – four boards as snowboard without biding yet I had to try it anyway. And it was something... 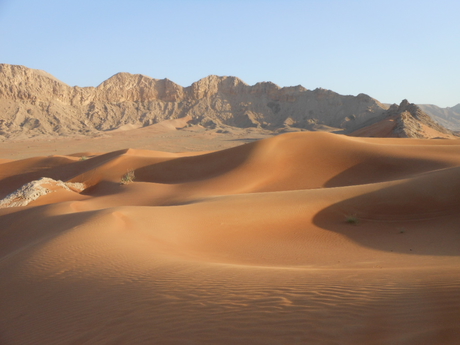 Then I have pictures of myself wearing an abay – a black frock – with an eagle sitting on a special glove. In the evening, a tenure introduced himself. He resembles a whirling dervish yet it is far from any religious experience. Then we enjoyed some shwarma, an Arabian type of kebab. We also enjoyed some falafel which is something like a burger meat. Then a belly dance performance followed. Then I enjoyed some of Arabian hospitality. We had fresh bread, a tabbouleh salad which is made of couscous dipped in lemon juice, mint, parsley, tomatoes and onion. Delicious. Then we had some humus - my favorite (milled cicer with oil and spices), khuzi (lamb on spiced rice) or mashbus (a risotto with pieces of meat and a mix of baharat, turmeric and corcus). For dessert we had a real treat - umm ali, pastry with raisins and nuts with coconut milk poured over it. 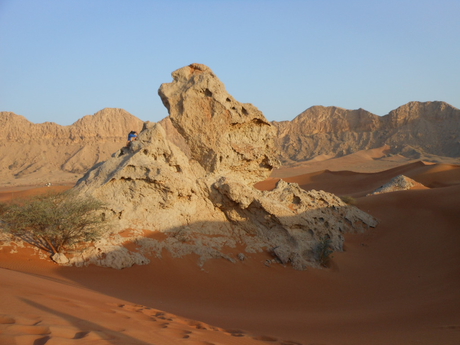 At the end, we watched three lit camels up on a dune accompanied with a Bedouin. Dramatic music was playing in the background. And so the great trip ends. I am driven to the next Emirate of Ras al Khaimah. Ras means a head and Khaimah a tent. So something like a headquarters, or a tent where a sheikh with his family reside. I think of the beautiful day in the oasis of greenery and flowers.

Deep inside my soul I was thinking what had been happening here until the 1950s! It was here where was the largest market with slaves! In the 19th century, the Brits abolished slavery yet the Arabs moved it to the oasis of Buraimi, the current city of Al Ain. 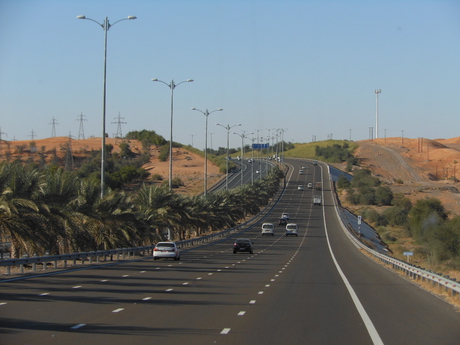 I entered the emirate of Ras al Khaimah, and the city bearing the same name. I accommodate myself at a hotel and enjoy the comfort of civilization. I lit the light – I didn’t want to stay in dark – I had drinking water, a bath so I didn’t have to bath in sand. My goodness, I was so spoiled by civilization

I enjoyed the beautiful vista from the hotel of the Hajar mountain range spanning over 700 km to Oman. The range reaches up to 2000 m above the sea level. Beautiful wadis, valleys, are in between the mountains. I have to go there! I meet Veronika, an adventurous spirit as myself. We agreed to go together across the mountains to the emirate of Fujairah. 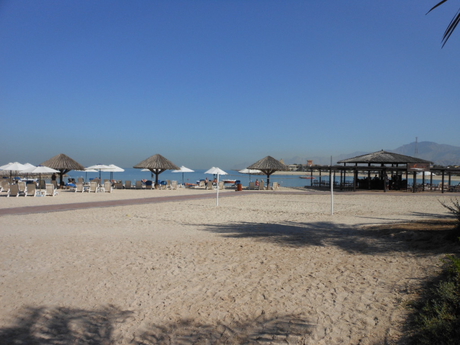 Today we take a peak at Ras al Khaimah. We move into the city center to see a large mosque, and then to an Indian quarter. We have biryani for meal, a bulk of perfectly spiced rice with chicken and spicey sauce. It comes with a yogurt, onion, and lots of water for you to not burn down. Then we go to a beach at the hotel. The sea is warm with 26 degrees. Yet one afternoon spent on the sea is enough for our relentless characters. 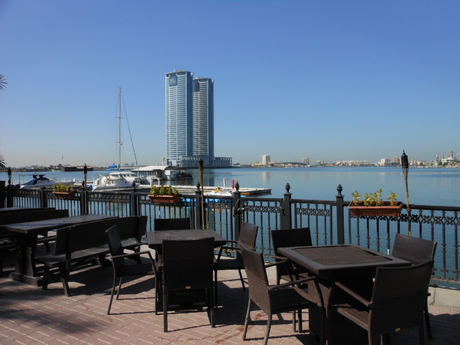 I learned that here in Ras al Khaimah is the longest ruling ruler in the world. His name is Saqr bin Mohammed Al Qasimi and he has been in the rule of the emirate for 66 yeas. He is over 90 years old, no one knows how old he exactly is. He is conservative and truthful Muslim. On July 15 2003, it was a really noisy day as people protested the streets. It was due to deprivation of the ruling rights from his son Khalid’s. Allegedly, he criticized good relations between the Emirates and the Americans. As the whisper of cormorants sitting on the roofs of fish revealed the prince was threatened with loosing his power if he hadn’t expel his wife. What did his wife do? She defended women rights. Khalid chose his wife over the rule. So now the prince is his brother Sauda. 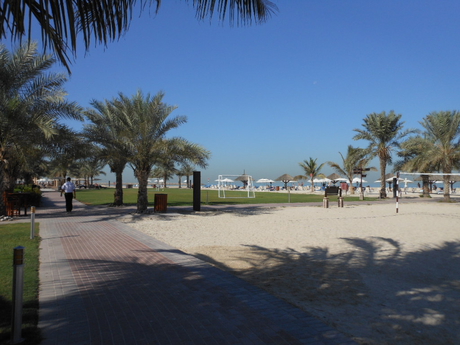 Ras al Khaimah is said to be the most beautiful of the Emirates. There are green plains, the Hajar mountain range, and high red sand dunes. Farmers, Bedouins, sailors, fishermen, and mountain tribes lived there. A market road ran through there, so the area has been always prosperous. The most fertile area of the emirate is Digdaga. It has vast farms that feed other emirates with fruit, vegetables, milk, and poultry. There are myriads of tuna fish in its waters. In the 19th century, there was a large fleet of 60 ships. On every ship were 330 sailors, so 20 thousand sailrs altogether. The Brits, however, labeled the ships as pirate. They sent a military convoy in 1819 from Bombay to burn the ships and destroy the city. Some years later, the rulers from the House of Qawasim were forced to sign the Treaty of Eternal Peace on the Sea and also to renounce “piracy and slave trade “.