No doubt, the town of Kouřim has its irresistible charm, despite the fact that this locality is substantially smaller as Kolín or Kutná Hora. During a walk (one day is fully sufficient), ancient past could tought you on each step. A past is breathing you, when passing on stony pavement on Mírové Square or in adjoined narrow streets. A past does not leave you in a peace, compelling you to watch the towers of St. Stephen Church, or if you touch with your fingers stone fortifications, surrounding historical nucleus of the town. 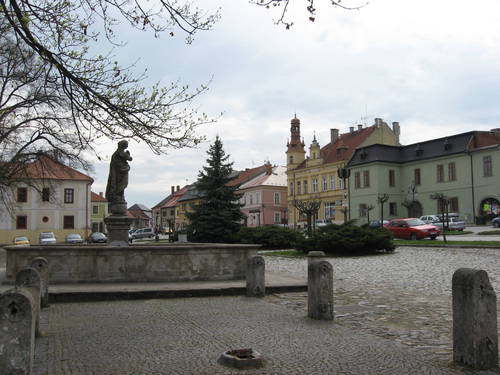 Astronomical Centre of the Europe - for the fist time…

Kouřim is literally a magic place for all astronomers. They came to an end, as a consequence of aged research and investigation that the astronomical centre of  Europe is to be found just in Kouřim. It looks like that such place is situated on the square, not far from municipal office. Steel weight, showing towards the only point - Kouřim - is moved by the wind. The weight is moving from one part to the other, and it stops above Kouřim inscription always during total calm only. 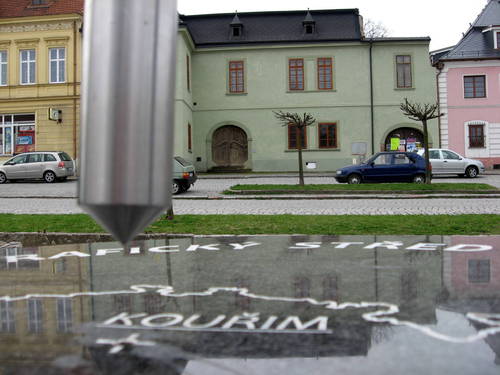 Astronomical centre of the Europe - for the second time...

Maybe, if the same weight would be in movement in distance of one kilometre from town centre, in direction to Kolín, so, some breeze would not sprinkle it. Just at such place, right point of intersection - of the 50th parallel and 15th meridian - i. e. the astronomical centre of Europe - is to be found. However, this pole of yellow colour shade, situated somewhere in fields, is not too attractive for tourists, and local councillors know it. So, they decided - the Europe will be equipped with two astronomical centres - with one genuine and the second for decoration.

It is a fact that main square in Kouřim is not necessary to be decorated with sometíng. The square is a decoration itself. Stone pavement from the middle of 19th century could cause for all persons who have trouble with walking, rather more complicated terrain. On the other hand, this uncomfortable surface (hiding below intricated system of subterranean corridors) could be a jewel for all lovers of history. The square was preserved in its original extent - i. e. 16 thousand square metres - belongs to biggest Middle Age squares. Its circumference is surrounded with Middle Age houses with couloured facades and ceilings of Gothic style. 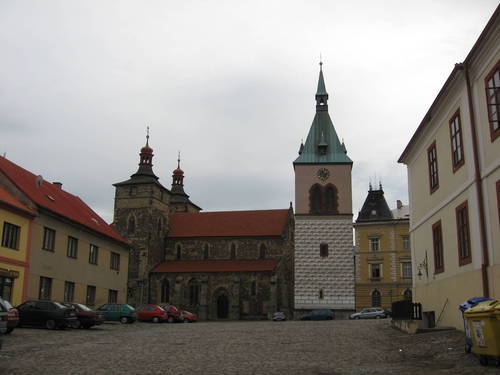 St. Stephen Church, including bell-tower of Renaissance style, is a town´s dominanta. Despite numerous big fires which teased such unusual building in past, its original face was preserved in most parts. The church was constructed in the middle of 13th century. On a space in front of  the church, St. John Nepomuk statue is placed, close to municipal office and several vehicles parking there, provoking all persons, who would like to take some photo in Kouřim, in negative way. Kouřim is inhabitated with approx. two thousands of persons. This small town has its desired effect as rather unpeopled locality. The way of life is acting in lazy way during working days. To tell the truth, one foodstuff shop makes the impression of the life twenty years ago. One older man was leaning out the window of his flat on the square for couple of hours! And, why not? If something would happen there, he would be the first to have the chance to follow it!When you visit Kouřim, do not forget to have a look local museum. It is the only nature museum where you can admire the historical buildings from the territory of Bohemia. 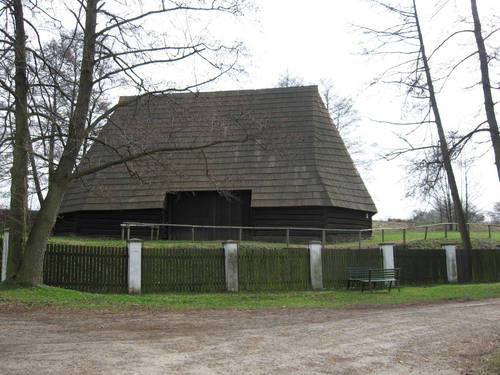