en.infoglobe.cz » Places of interest » SVK: Ružomberok - A Town Of Many Faces

In past, a stop in Ružomberok was not too popular. The reason for this fact was an intensive odour from local industrial factories which outlasted from Váh-river valley among mountains. On the other hand, the actual situation was improved a lot in the course of past years. So, if the air would be „pure“ it is worth to have a small stop there from this point of view. Till the second half of 20th century, Ružomerok became, especially thanks to its strong industrial tradition, a centre of Liptov Region. At present, this position must be shared with Liptovský Mikuláš – both cities have approx. 30 thousands of inhabitants.

Anyway, many towns could be envious of Ružomberok its mountaneous environs. Close to city centre, Čebrat Hill is taking out, followed by Choč Hills on the opposite bank of Váh-river, and Great Fatra Mountain Range and Low Tatra Mountains in the neighbourhood. Despite the fact that no outstanding sightseeings are available in city centre, a short walk throughout city nucleus could stin you with its quickly changing and heterogenous face of each snug corner. Prevailng part of buildings was constructed during 20th century. This architecture, including quarter of dwelling houses created after 1945, is typical for this period. The attention of passers-by would try by means of frequently gaudy colour shades of house facades of re-newed shops or boarding houses. 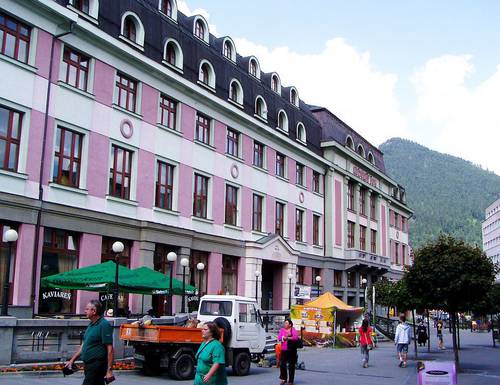 We  walk around newly reconstructed historical Cultural House, with characteristic elements of Prague architecture of 1930. In fact, now, it is a multi-functional complex where you can find, except cinema, theatre hall, restaurant and caffee, also hotel, Sokol gymnasium, offices, shops and other useful spaces, bearing the name of Andrew Hlinka. This person granted allegedly all his property (wealth) for this building. Walking through foot-passenger zone, we mount upstairs, towards Town Hall. No doubt, this relatively steep hillock, situated close to confluence of Revúca and Váh-rivers, was obviously attractive for colonization from time immemorial, as a suitable refuge against enemies as well as against inundations.

The name of the town was derived from German word of Rosenberg, i.e. Pink Hill. In front of Town Hall building, the traffic is suddenly changing into calm atmosphere of market place. Around Andrew Hlinka Square, small village houses are predominating. In the middle of the square, from Virgin Mary Column, there is leading  an avenue of bushy linden and chestnut trees, creating  in such way its unique „green lungs“ of the town.

A memorable plate with a bust, placed on Town Hall building reminds Robert William Seton-Watson (1879-1951 - his pseudonym was Scotus Viator), British historian and journalist. This person made big efforts for rights of nations, oppressed in former Austria-Hungary Empire. He supported also the creation of Czechoslovakia in 1918. Just close to Town Hall, one of city dominantas – i.e. St. Andrew Church – is located. The followng information would be interesting for tourits: Priest Andrew Hlinka baptized  in this church local native, Vlasta Průchová (1926-2006), well-known jazz woman-singer.

From square terrace with balustrade and statues, there is a marvellous outlook towards Great Fatra and Low Tatra Mountains panorama. On a square, a statue of Andrew Hlinka, famous native, is dominating. Even a mausoleum, below church terrace, is consecrated to him. Neverthelesss, it could be rather surprising fact that this building (mausoleum) was constructed ten years before the Communists have taken over their power, and moreover, that it was dedicated to Catholic clergyman. The complex served, as a tomb, during period of 2nd World War only, since that time, the building is empty and closed.

In the town, it is also worth to visit historical as well as patriotic collections of Liptov Museum, and also modern building of Ludovit Fulla Gallery, built as the protection of works of the next famous local native (1902-1980). He presented with all his works Slovak National Gallery. When visiting Liptov Museum, each tourist will be invited to call on further museum exhibitions in the environs, such as, for instance: Likava Castle, „live“skansen in the village of Vlkolinec (registered in UNESCO World Heritage Survey), Archeoskansen Havranok, in the neighbourhood of Liptovská Mara Dam, or another skansen in Pribylina, or ethnographical exhibition in Liptovsky Hrádok, etc. In Ružomberok outskirts, it is also worth, not to miss Hrabovo Relax Centre, including Malino Ski Centre, Lúčky Spa (known as Slovak Františkovy Lázně Spa) or Bešeňová Thermal Park.

Published: 10.2.2009
Likava castle is located on north-west edge of Liptov Region. First notice comes from 14th century, when the castle was established, in order to protect a passage across Váh-river with an important merchant way, leading from Pováží Region to Orava and into Poland.

Shall you plan a family trip, be sure to visit Cutkovska valley in Ruzomberok city. What waits he...