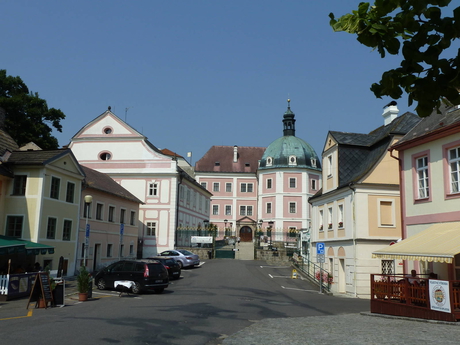 The edifice located on the rock dominates the surroundings. You even don’t need directions in order to get to the “castle”. You take just couple of turns and you are in the square and you park your car there. Only couple of more steps then separate you from the renaissance entrance gate. In the present what you can do is only to see the chateau as the castle is being renovated (until 2018). There are two main things you can do there – either take a tour through chateau’s interiors, or a 45 minute tour of the Reliquary of St Maurus . The latter takes you to five chambers, in the last one regular temperature is maintained and dim lights. In the center of the room there stands the reliquary coated in gold. It is Czech Republic’s second most valuable item. Security measures are indeed high. You can stand only 0.5-1 from the reliquary which means you would hardly see all details. Still, it is marvelous view. 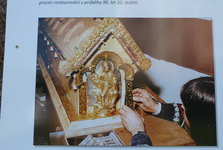 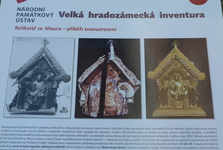 Our guide told us about some important details and explained them to us. Every golden decoration or a precious gem has its own symbolic meaning. The original wooden case is displayed in the treasure room and on it are attached golden features. It is sort of a little long wooden house full of nail holes. The new case is made of oaken wood – it is the least prone wood to decay. It took 11 years to move all decorative elements and finish all renovation works which were joint effort of many people of different professions. The overall expenses which reached 12 million crowns is nothing compared to the historical value of this item. Thrilling story of how this reliquary was found after it had been hidden 40 years underground I will leave to the guide. 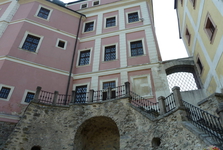 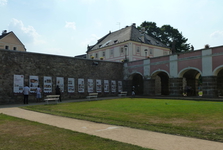 The whole process of castle’s renovation will end in 2018 at the latest. Then three new visitor routes will be open. There are also a castle park and two chateau garden along with 11 structures spreading on the compound of 3.5 hectares. 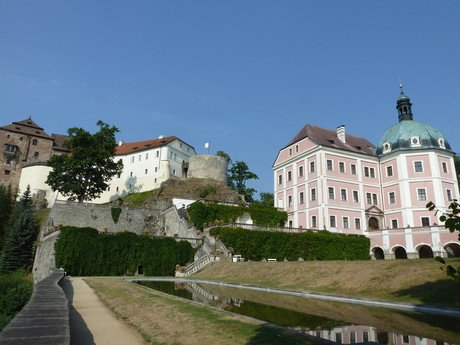 Published: 28.7.2020
Most of us know the famous West Bohemian town on the Ohře river thanks to its spas and healing springs, perhaps thanks to the International Film Festival. But there are many more reasons to visit. Let's go to Karlovy Vary together.

Published: 4.8.2020
Not far from Karlovy Vary stands the majestic Loket Castle on a high rock above Ohří. It is surrounded by a picturesque town with half-timbered houses and everything is completed by the surrounding nature of the Slavkov Forest.

CZ, Loket – Beautiful Historic Town and the Castle on the Ohře River

Not far fromKarlovy Vary, the majestic Loket Castle rises above the Ohře River. It has been stand...

Healing spring, film festival and Grandhotel Pupp… Do you think of anything else when you say Kar...