Published: 28.11.2013
We enjoyed several days in the Low Tatras despite the fact that weather was not good. Excited tourist and a man who loves mountain is hard to discourage, especially with only few rain drops that bring with them nice smell of mountain air. Our goal today was a tourist view platform above Pavcina Lehota town.

Although the sun climbed even after breakfast and we did not know if the prospect see anything because the thick clouds suggest that, even now, we avoided the rain, we decided to still go for a short trip. We got into the car and moved to the beginning of Demänovska valley, to a well known town among tourists and skiers Pavcina Lehota.

Pavcina Lehota hardly needs an introduction. It is located at the beginning of Demänovské valley, on the right side of the main road in the direction of Liptovsky Mikulas leading to famous ski-tourist destination clear. Especially in recent decades, the village has become a popular haven for people who seek peace in the bosom of the Low beautiful nature. In the summer you will appreciate its perfect starting location for walking to Demänovské valley or more challenging hikes in the Low Tatras National Park. In winter again you have it really close from the largest Slovak ski resort - to the resort Jasna Low Tatras. However, if you love rather small ski resort with a family atmosphere and lower prices, the place will surely come on the ski slopes in the village center Ski Ziarce. 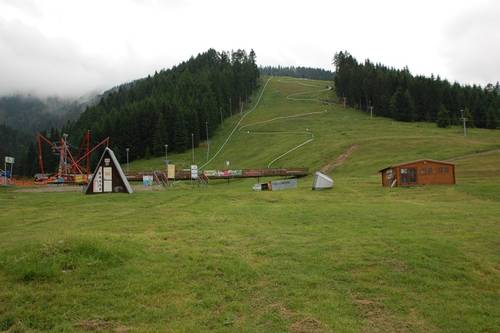 If you can not imagine a holiday without some adrenaline experience, even in this direction you visit Pavcina deadlines disappoint. From spring to autumn, you can enjoy ride on a bobsleigh circle with a length of one kilometer , which can reach speeds up to 45 km/h . Bobsled However, during rain unfortunately not in operation, so we have this unique pastime could try. We parked our car in the center, pulled a hood on his head and went for a walk along the village. I must say, it is seen that the local village have their really like . Everything was well prepared, nicely renovated old wooden houses and even newer to the extent possible, trying to fit into this pleasant rural environment. We visited a local convenience store , where we were served the very kind and communicative saleswoman , we stopped at the memorial to the fallen heroes SNP , behind the fence of the cemetery we admired the beautiful wooden belfry , which since 1963 declared a cultural monument and stopped even plow , which was used in the past to fecundate the land, but since 2006, when it was pulled from the treated crop and serves only as an exhibition item. 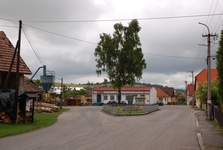 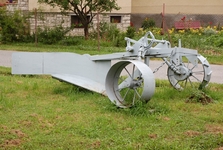 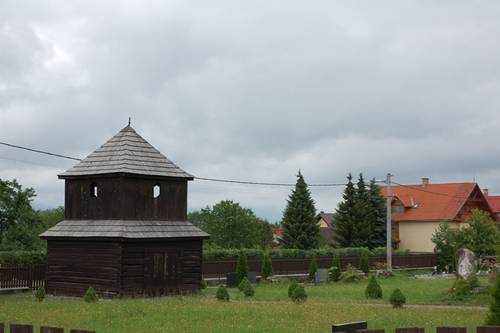 Rain gradually changed to a pleasant drizzle and even visibility became better, so we did not hesitate a moment our feet pointed to the lookout tower in Žiarce just outside the village.

The wooden lookout tower standing on the edge of the slopes in Ziarce was built and opened to the public only relatively recently, in the spring of 2007. When you get to the parking lot below the slopes in the Ski Ziarce, you will see a turn to the right onto a dirt road that takes you a few minutes leading up to the tower. As the wooden observation tower was built on the northern slopes just below the edge of the forest, view from it is considerably limited but still was very interesting. You clearly see Liptovska basin and even mountains behind it. If you got a nice weather you can admire near Mala and Velka Fatra, Choc Hills , West Tatra Mountains and everyone who loves mountains will easily identify Krivan in the High Tatras. But if you had any doubts about what exactly you see, is to navigate even by color and accurately described panoramic photos that are placed under a canopy observation tower. 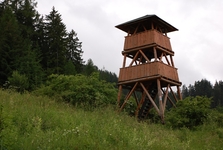 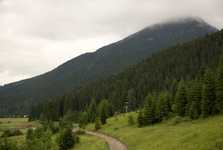 We unfortunately had heavy rain again again, and we quickly moved to a nearby pub, where we had lunch ordered a plate of gnocchi with wonderful cabbage soup. After we refreshed ourselves, we still walked around for a while, and then faced a wet, but it pleasantly refreshed, we moved the car back into clear where waiting for us warmed tub with warm water located beneath the roof terrace of the hotel where we rested until dinner. Though not exactly the best weather, again, we confirmed that the nature and healthy mountain air can do wonders to one. Forget all your worries at least for a moment feel that nothing bothered him. Pleasantly tired and well fed we got into our quilts and endowed with a drink in hand, we enjoyed a great movie. Again, we had had a lovely day out in the fresh air, from which we draw strength long after returning to the reality of current day.

SVK: Safely To The Mountains V. - Western And Low Tatra

Published: 6.2.2012
In the fifth part of series about the safety of the mountains we will talk about the basic rules of movement and behavior the Western and Low Tatra area in summer. Summer tourism in our area is very popular activity. That is why, in terms of injuries, are among the busiest period of rescuers.

Nucleus mountain range of Low Tatra Mountains is most extensive chain of Slovak Republic, and the...