So, this monumental Liberty Statue salutes all arriving vessels, and especially the passengers,  from small rocky island, situated at arrival into port of North America metropolis. Just from great distance, there is to be seen lighted electrical torch in arisen right hand of the statue. This copper made lady, 46 metres high, placed on its 47 high ground floor, on Bedloe Island (today Liberty Island) was visited, since their arrival to New York in 1886, more than 50 millions of visitors. This lady made a long way: it was a gift of French people to United States, on occasion of 100th anniversary of America´s independence. Since 1871 till 1884, Frederic August Bertholdi, sculptor, born in Alsace (France), worked on monumental figure, (which was partially financed by French government), and partially from gifts. On base of two models, one 2,11 metres height, and the second of 8,50 height, the artist worked out today´s face and stipulated final dimension of the statue. 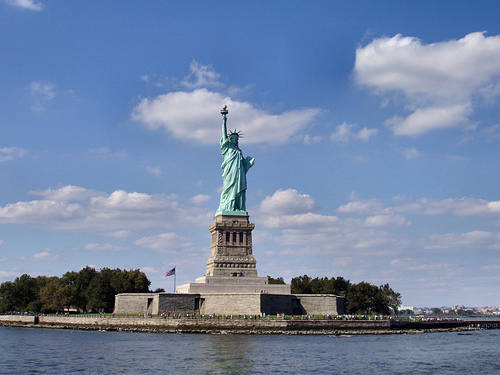 Steel scaffolding inside was constructed by Gustave Eiffel, constructor of famous tower in Paris. Outside „skin“ which is covering a skeleton, is consisted from three hundred copper plates approximately, each of which could be 0,2 mm thick. Total weight makes more than 80 tonns, so it is the heaviest covering of the world. After 13 years of work, in 1885, the Liberty Statue went to its „trip“ across Atlantic Ocean. This gift of state (total weight of 225 tonns) was transported to America, taken to separate pieces. British newspapers „The Illustrated London News“ described this event as follows: „500 guns stormed and many bells rung, and immense applause of spectators came, when the statue was unveiled“. This event occured on 28th October 1886. The statue, originally named as Statue of Liberty Enlightening the World, was placed on granite base, situated on basement walls of former citadel. The statue helds, in his left hand, a table with American Independance Declaration (on 4th July 1776). Cut chains, placed below her legs, present a symbol of liberty from slavery and from hegemony of violence (however, all this are to be seen from birds´ view only). The torch of this immense monument has a construction made from glass, copper and steel, and it is nearly 9 metres high. When the total reconstruction of Liberty Statue was started in 1984, so there were changed (nearly 100 hundred years old) copper and steel nails, taps, rivets and screws, connecting together steel supporting construction inside the statue. Even outside covering from copper plates (boards) was changed. This gigantic lady obtained also new torch into her hand – this old one could be watched down on earth, as exhibited subject. 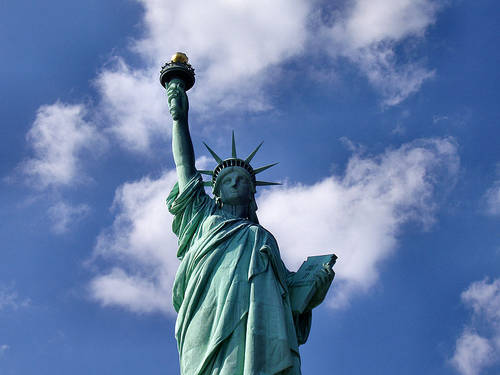 From statue basement to legs of statue, there are leading 167 stages, crowned with diadem of rays. Along winding stairs inside the statue, with 171 stages (this corresponds to twelve floor high building) – has to be overcome by everybody who would wish to enjoy a view through windows , put in statue diadem (headband). From here, you can see all the port and complete New York horizon. You can also see Ellis Island, (distant from Lberty Island, approx. 1 km). This island was, in time period since 1892 till 1954, preliminary final point for about 12 millions of immigrants. The passengers had here, after passing Liberty Statue, (as a longed-for symbol of freedom in New World) undergone immigration formalities and stay here prescribed  quarantine period. However, many from these desperate hoping persons could not overcome this stop and were sent back. 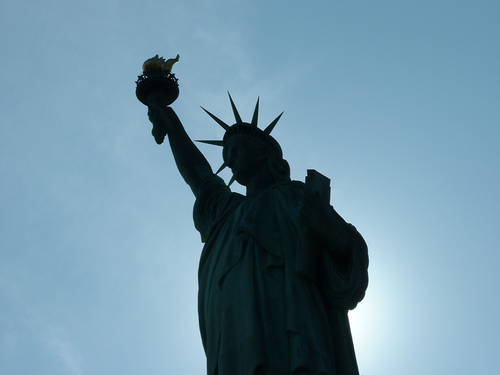 Do You Know That? The Highest Statue Of The World I.

Published: 23.10.2011
Monumental memorials of commanders, national revivalists and saints we have practically in every Czech town. Most of them are rarely higher than their life pattern. What are the highest statues of the world?

Do You Know That? The Highest Statue Of The World II.

Published: 30.10.2011
Is Chinese giant Buddha really the biggest? And which of the female statues is the biggest? This and much more can be found in the second part of our journey through the world's BEST statues.