en.infoglobe.cz » Do You Know That? USA: New York - Stop In Harlem 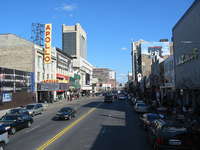 Generally in our country there is the idea that Harlem is in New York instead of extremely dangerous and can only visit them suicidal. Knowing that the majority of stories are exaggerating, but I crossed Central Park, the imaginary dividing line between it "safe" Downtown and wild Bronx and Harlem neighborhoods around 152nd Avenue and entered into this risky area. What else could I do when I wanted to see the legendary Apollo Theater on 125th Theater Street, where in the twenties and thirties jazz was his kingdom, as in the nearby Cotton Club, where she sang Ella Fitzgerald and Duke Ellington played in that period, which is still called Harlem Renaissance.

Taken according to map, Harlem is located close to the absolutely most expensive apartments in and around Central Park. Not far from here lived and was killed John Lennon, at whose house still on the flowers. On the opposite side of the street lived the widow of President Kennedy. Distance these luxury dwellings from the point wher 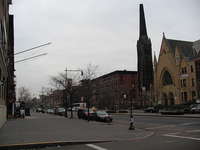 e he is just stealing and sawing, is not greater than the Czech Republic from the National Theatre on Wenceslas Square, which is in New York a negligible distance.

Yet Harlem was another world. Charming? Picturesque? I would not call it so. Some side streets look like anywhere else, only young men were full of hovering, elsewhere signs "For Sale" adorned the houses that were probably more of a blast. I could not understand that in a city where every square meter price of gold, so let it be - but now apparently it is not true and Harlem is a place of systematic interest developers. What does it have its inhabitants, I can´t guess. The truth is that nobody forfeited me and the people of Harlem are even willing enough to let the pictures when I politely asked beforehand. So you can´t belive in some of the myths.  One can´t pretend that there is absolutely safe and the visitor does not have to worry about himself. 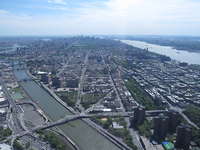 Harlem is, was and probably will be part of relatively closed community, ethnic group, who don’t particularly wish invasions of “aliens”.

On the one hand, it is in today's open world a little odd, the other is the internal rules must be respected, although the former situation is radically dilutes the ongoing construction of more luxury flats and those in places where once lived a poor immigrants from southern states. The time when the imaginary boundary between the worlds of black and white on 110th street crossed the just a few, but they are already long past, respectively about twenty years, when it strengthened policing of street life tough Harlem. Finally, perhaps only to add that rough and neighbouring legendary Bronx district, there is just nothing interesting or attractive. Harlem, by contrast, its history and something one might say the genius loci ...