en.infoglobe.cz » Israel – Masada Fortress and Swimming in the Dead Sea

Masada fortress is situated on a steep rock rising above the Dead Sea and the vast Judaean Desert. The fortress is situated on the road between the Ein Gedi oasis mentioned the last time and the known Biblical city of Sodoma. The rock itself rises up to 450 meters above the Dead Sea (about 30 meters above world ocean's surface). It is 650 meters long and 300 meters wide. The platform with the Masada fortress is 550 meters long and 270 meters wide. 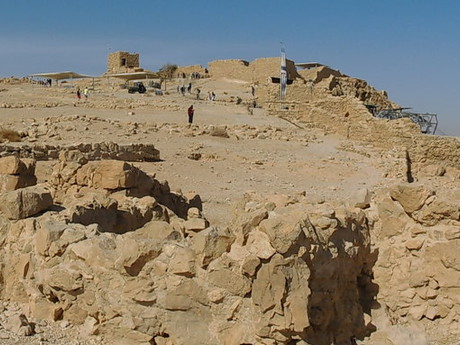 The fortress was incredibly important for the Jewish people. The Jewish War by historian Joseph Flavius is the richest source of inofrmation on this fortification. The first one was founded by Judean king Alexander Jannaios in the 1st century BCE. However, Herod the Great reconstructed a great deal of the fortress. In the first phase of the war between Jews and Romans Jewis zealots captured the fortress. In the year 73 AD, 15 000 Roman soldiers sieged the fortress. Back then the number of Jewish insurgents rose to 960. For three months Romans were building a ramp for attack to overcome steep rock. Once they entered the fortress they found only 960 dead bodies. Only several people who hid in wter tanks survived. 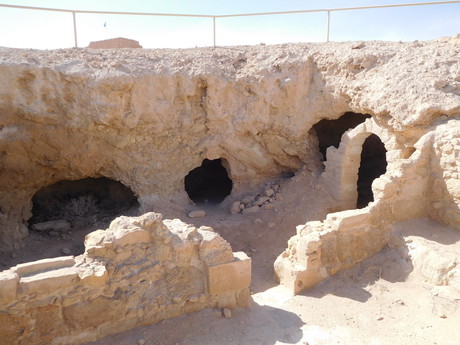 As Judiasm forbids suicide, first women and children were killed, then 10 men were chosen to kill all others. Of the ten last men last one was chosen by random to kill the nine others. The last one then took his own life. However, the legend contradits actual excavations. These found only 28 bodies. In the years to follow, the fortress was operated by Romans, then Christians monks who were subsequently ousted by the Arabs. In the centuries to follow, the fortress was forgotten. In the 19th century, it was re-discovered, described and mapped. 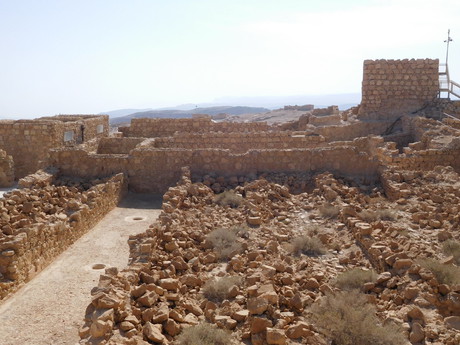 Today, you can get to the fortress either by cable car, or b hiking up a steep road which takes about an hour. At the bottom, there is a huge visitor's center featuring a restaurant, souvenir store, and also they screen a short film. The fortress is mostly composed of ruins. However, the Northern or the Herodian palace or casemate wall, one kilometer wall going around the entire fortress. Also, there are dozen of chambers and remains of towers and huge water cisterns used to supply water. Even though there is no water source fortress had plentiful of water. During rain season in the mountains, two viaducts brought water here to water tanks. 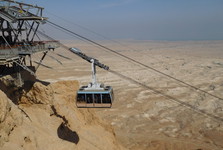 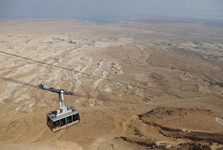 Upon visiting the fortress, we set out to have some rest by the Dead Sea. We are situated on Earth's lowest place for the water surface of the dead sea is at -437 meters. The sea is about 50 kilometers long. Its volume has becoming smaller. For dams were built and outflow of rivers the sea lost great deal of its water resources. It is supposed to completely dry out before 2050. Therefore, it has been considered to built a 180 km pipeline to bring in the water from the Red Sea here. 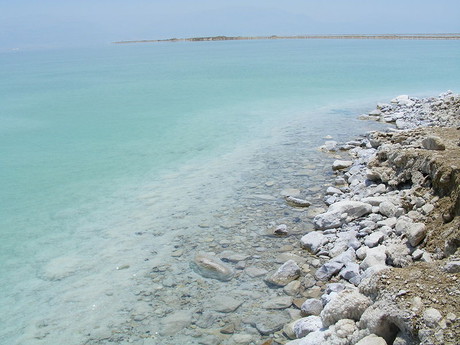 The Dead Sea is still frequently visited thanks to its healing effects which is a result of high concentration of minerals. For its low altitude there is another layer of the atmosphere making sun not shining so agressively. Sea's density remains its most interesting feature. IT is almost impossible there to swim. Hence everybody just floats on the surface instead.