en.infoglobe.cz » Russia: A Journey to Novgorod

Anyone who spends a vacation in Russia should visit old and famous city of město Novgorod, located on the river Volchov 160 kilometers southeast from Petersburg. Historical data mention Novgorod already in the 9th century. They talk about Rurik, a legendary Viking chief. Allegedly, he ruled here and he is regarded the founder of the Russian state . In the course of the 10th 11th century, Novgorod was the second most important city of Kiev Rus. 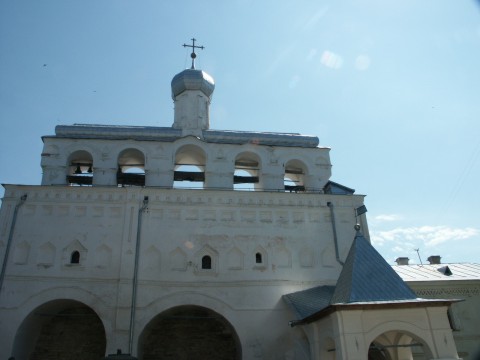 After Novgorod secession from Kiev Rus in the 12th century, a „boyar republic “ was founded. Its riches was in trade within a hanseatic league. Old Novgorod used to be described as a Russian version of medieval democracy resembling Italian trade republics. This historical democracy vanished. In the second half of the 15th century it bowed to growing power of Moscow. In 1478 Novgorod was annexed by Moscow

The fall of Novgorod climaxed during the rule of Ivan the Terrible in 1570. During a sixweek massacre, a revenge for a tendency of the Novgorovite princes to join Polish-Lithuanian Union. About 60 thousand people were killed. Tzar’s soldiers threw the people of Novgorod to the Volchov river. Soldiers were in boats on the river killing any still living people. It was the last time Russia saw democracy. Since then infamous Russian despotism has been ruling the country, „Tsarist autocracy“. In various forms it made life harder to its people and the surrounding world as well. 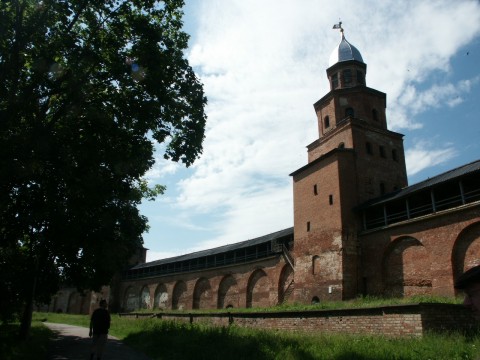 It fits very well that bell rang for Novgorod, since when walking in vast Novgorod kremlin one’s attention will be caught by a collection of huge bells. Except this, there are also churches, cathedrals and small churches 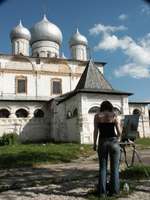 almost everywhere. So large number of holy places makes you think about architectural mania of the people of Novgorod. Also, it makes you think about sort of a competition among holy places. Surrounded by large churches and small churches, ancient Novgorodians faced similar temptations as people today face while being in a shopping mall. In both cases, it is a way to paradise despite in different meanings.

The church of St Sophia is remarkable. There is an icon of the Heavenly Mother known as Znamenie. The legend says, the Heavenly Mother revealed to one of local saints. Their remains also lay in St Sophia. It was in the time when the army of the city of Suzdal tried to capture Novgorod. Theotokos advised the people of the city to take her icon on the wall. It made the Suzdal troops blind, or so. Simply put, they were paralyzed by a supernatural factor. Before, their arrows hit the icon and it started crying.

Alleged traces of Suzdal arrows framed and placed in some monastery were showed me by some local babushka. Initially, I wanted to ask her about the name of icon. You can even buy here its pretty elegant replica. Except for the fact that babushka forced me to write all details of icon in azbuka and all details of my visit, she also told me about difficult life in present Novgorod.

Babushka was born in Irkutsk and later lived in  Moldova. She said it was better then and there than in Novgorod today. Salaries are low, she has about 2500 rubles/month and the prices in rubles are almost the same as prices in the Czech Republic in crowns. Summer lasts only two months here each year. Already in August it starts freezing. This the reason why you cannot plant anything there. It is true that we saw only potatoes and dill in local gardens. Even in Siberia, in Irkutsk, summer lasts 4 months.

Novgorod lures tourists to other things than icons or old architecture. These lures are mostly for men. On a pedestrian bridge leading from kremlin across blue Volochov river attractive girls walk there in summer. What I have heard about this kind of social behavior, these girls want to promote themselves as the best “product” to be “bought” by a rich “interested man”. Who does not have the money can at least watch or take a picture. 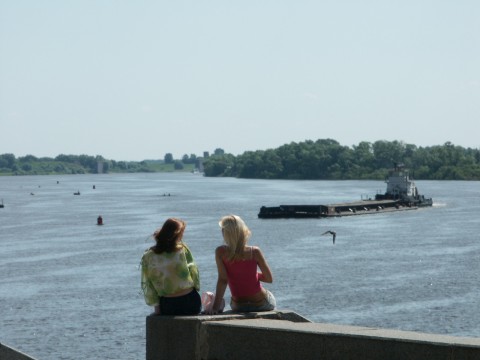 In my opinion, Russian women are very beautiful. Compared to  Czech they seem to be generally thinner. Some would say, that it is due to the fact that Russian beauties have nothing to eat. Also some say, that they like to invest rather in clothes than in food. To prove this thesis true, it would require some more serious research. A look at local girls might make you thing that it is worth spending here longer time. After all, dill in the food is not that bad. One can get used to it. To conclude: if you like bells, churches and beautiful women, you should visit Novgorod.