Charles IV stayed in castle just since 1355 . He controlled the construction as

well as decoration of interior halls. Building works were terminated in 1365, and in the same year, there was consecratea  St.Cross Chapel in Great Tower.

Within Hussite Wars, there were hidden (from security reasons) in Karlštejn Coronation Jewels, and remained here, with some pauses, nearly 200 years. After 1480, the castle was arranged in late Gothic style. At the end of 16th century, the Renaissance reconstruction was undergone, and finally, its last arrangement (today´s face) was given at the end of 19th century.

A unique highlight of Karlštejn castle, there is original wall-decoration of St.Cross Chapel of 14th century, consisted of 123 desk-pictures of Master Theodorikus, portrait galleries of Bohemian sovereigns, including copy of Coronatioon Jewel - St.Wenceslas Crown.

Karlštejn castle is situated in Preserved  Nature Area of Bohemian Karst, distant approx. 40 kms of Prague. It is placed in beautiful countryside on a hill ( as it is obvious in case of castles) in the community of the same name, along bank of Berounka-river.

Provided you decide to go here by car, quite large parking place is available, where you can leave your car for a fee of CZK 50,-. Now, you have to overcome 2 km long and quite steep hill, to reach castle entrance.  Do not worry, that you have to go upstairs borely. Along the road, you find a lot of stands and shops with souvenirs, ice-cream, refreshment or sitting in one of many restaurants. Provided, your wishes, regarding shops sightseeing do not be suited fully, you can rent, near to parking place, a carriage, drawn by pair of cool-blooded horses and let to be carried out nearly to the castle entrance. 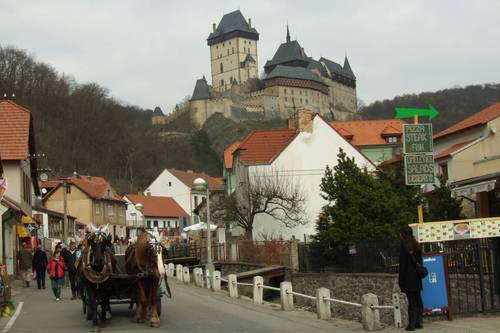 In case of your interest, you can visit also wax-museum. It is open daily, and you can admire here 50 wax-figures of important persons of Charles IV era. 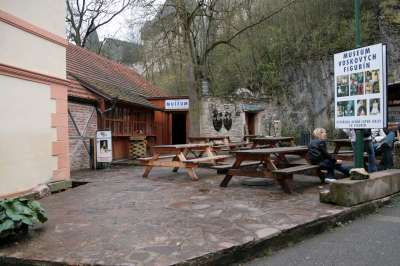 The other very interesting attraction, you can watch along your way to the castle, is a man, dressed in costume-era. On his hand, there is sitting a wild bird. You can receive a photo of your person with this penniferous animal, with a fee of CZK 30,-. However, woe to you,  provided you take a photo and do not pay, so you have to hear a couple of insultations!

After conquering of this upleasant hill, we finally reach main courtyard, you probably wish to order the sightseeing. After your ordering, you will have time enough for walking along fortification and enjoy marvellous view of castle dominanta and view around. There are coming plenty of tourists to Karlštejn every day, you will have to wait a little. An assumption, that you come to cash-desk, pay for entrance and start immediately your guided tour, is not valid. 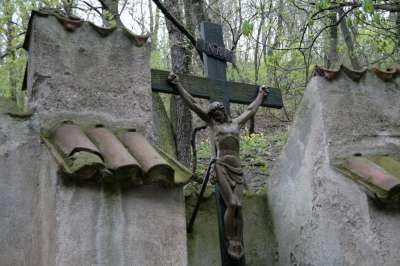 This first guided tour is to be effected with guide only. It takes 50-60 minutes, for 55 persons max. Reservation for groups of more than 10 persons for tour is necessary.

This guided tour will be open for public since 1st June till 31st October 2008.

This second guided tour is to be effected with guide only. It takes 100-110 minutes, for 15 persons max. Reservation for any of possible visitors is necessary. 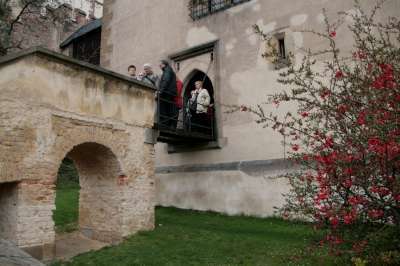 Opening Time of  the Castle: