It is hot summer day and the locality is overcrowded, living with its right spa way of life. The people fill in styled cups healing water will from several spa springs, sitting and relaxing in the park, tasting spa wafers, drinking coffee and enjoying Sacher cake. You can see a satisfaction in faces of all persons, who came there.

Despite visible decline of nearly all spa towns, Luhačovice remain a busy perspective town, despite the fact that most of clients is formed with elder persons who are not perfectly healthy. They arrived to Walachia, in order to get rid of diseases, including troubles with respiration, indigestions or obesity. 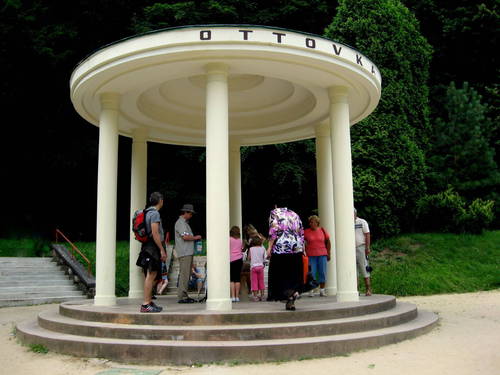 Maybe, not only healing springs, including Vincentka Spring, but positive state of mind, prevaling in Luhačovice, permits the patients to forget all negative things which worry them.

In Luhačovice central lawn-tennis court with tribune, reminding the First Republic era, a tennis match is played. However, nobody of players reminds a performance of Rafael Nadal, but, to tell the truth, the play of best quality level does not come into question at all. The spectators are sitting on the banks announcing loudly each strokes. They applaud when the strokes are good. They do not know each other at all, but they act as a real fan club. Most of spectators drink spring water. And, frankly speaking, they did not come to Luhačovice for tennis play only.

A lot of people walk along the streets even after dusk. Below covered colonnade, close to Vincentka Spring, the persons dance. A couple of professional dancers came there, in order to teach dancing. To tell the truth, these creations are far from scenes of „Dirty Dancing“ movie. Nevertheless, the lecture seems to be positive. All persons who visited an hour of dance, were dressed in very perfect style. They experienced fully, without any embarrasment, tango rhytmus, smiling. The people who passed by, stopped there looking at the dancers. 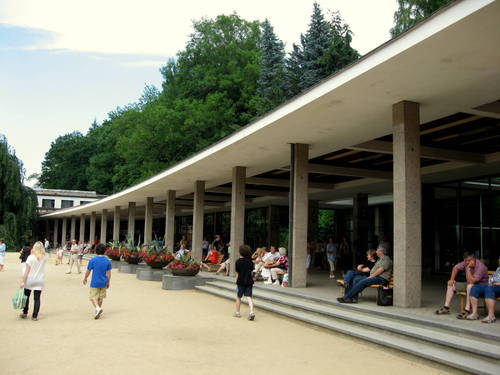 A Dam where the water is missing

Luhačovice Dam, situated in distance of two kilometres from the town, could be named as non-cured scar of the locality. The work was started to be built in 1913 but it was finished and filled in with the water 13 years later. Before 1989, it was a popular place of Trade Union members. Whereas the hotels, placed not far from the pier were a brand of luxury, at present, they remain as sad memory for better time period. Even the dam itself lost its character. It is covered with impurities, and the bathing there is not allowed. In last year, close to the pier, new aquacentre was open for public. so it is possible that summer saison will return there, close to the dam.

The dam itself would be cleaned from all impurities just before this season. However, this action was not succeded. Morava-river basin as well as the town announced several excuses. The weather was unconvenient, local people were not managed to be tranquilized, as they made protests against heavy tecnics, and also many financial operations were not managed, leading to such final solution. Anyway, the only thing which was managed: non-explosive grenade from the 2nd World War was found on the bottom of Luhačovice Dam! Wise proverb says: all bad things could change into positive ones! 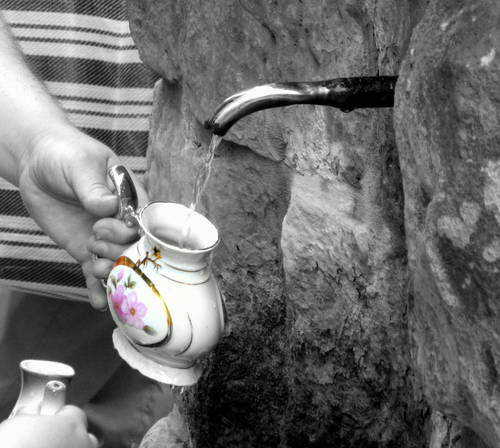 Published: 26.3.2010
Lukov Castle - you cannot see it directly from the valley, the path leads there through forest.You follow red-white marked signs of the castle, pictured on tree-trunks, this is the only guidance to the target. Finally, after three kilometres long walk you reach your finish, stone fortifications of ancient ruin.