Two towers were supposed to stand at the front facade of the cathedral. Eventually

only the north tower was built. There are inscription by various people there are both vulgar both leaving messages to ponder about. There are only several vulgar inscriptions. Climbing the stairs is very pleasant when you stop to catch your breath and look out of the window. Bells hang on the top floor and a clock above them so you may see it while climbing up.

The clock had been inside the tower since the 16th century. However, there are only several mentions of them. In 1803, a new clock were purchased for 1400 gold coins, add the work the total cost climbed to 2327 gold coins. Unfortunately, the clock and the tower were destroyed during the fire of 1835. Three years later the new tower was built with the new clock which were put there in 1990. So there is nothing historic about it.

Bells have been put inside church towers since the 6th century. Their shape as we know it today originates in the 13th century. The bells called the citizens to gather for a prayer  and also announced some religious tasks, and warned people against danger. Bells belonged to a church so before a bell was put inside a belfry it had always been baptised  and was named after a saint. The first was named after the patron of the cathedral -

Bartholomew. Unfortunately, the fire destroyed all five bells. Immediately new bells were casted and were named: Anna, Maria, John, and Prokop. The main bell - Batholomew - was casted in the year 1854 and became the second largest bell in Bohemia. Unfotunately, the war needed ammunition to feed itself so came an order to bells to be used in 1916. The bells Anna, Maria, and Bartholomew were melted and used for ammunition. Not even later were the bells left alone. But you may learn about it on a commented tour. Today, you may see the new bells which rang on January 17, 2015 for the first time. 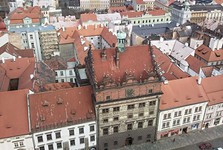 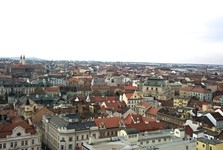 And finally, a small room before the belfry gallery. We are at 62 meters after climbing 301 stairs. You may see 72 kilmoeters into the distance in good weather so you can see the Šumava. Inside the gallery, there are small panels with a map of the surroundings. therefore, you may see what do you see, for instance the city you came from. And maybe, here is the place where you plan your next trip around Plzni. 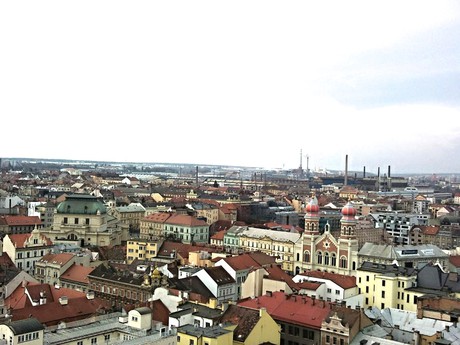