Southeast of Ľubietová there is a natural reserve, situated on the ridge of hills Vepor (1277 m) and Hump (1255 m). Lubietov Vepor is part of the protected area of ​​Polana. Protected element of the reservation communities are -  beech fir, but there are also rare species of flora from the world (orchids, bearded, daphne, lily, and pasque etc.) and fauna (gaudy eagle, eagle owl, spotted salamander, newt Carpathian and others).

On Vepor is located the intersection 19033 'east and 48040' north latitude, this place is considered the geographic centre of Slovakia. 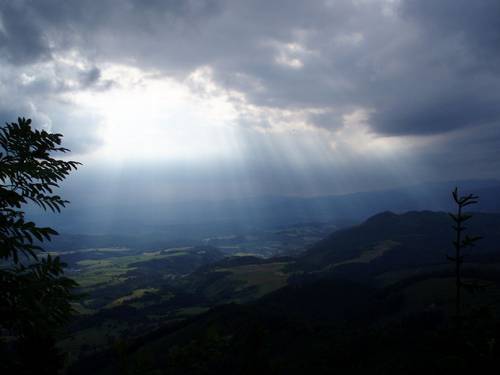 Archaeological finds from the year 1959 in a limestone cave near Ľubietová suggest that settlement of this area was ever in the Eneolithic (late Stone Age).

In the 5th and 6 century came to our territory, the Slavs who settled here permanently. They fed, in addition to agriculture and crafts ore surface mining method, or dug pits, are derived from what some of the land - Yams, Jamešná.

The Tartar invasions of the 13th century relates the sad reputation, coupled with the emergence of Valley Women's title, according to which women and children sheltered from the Tatars in the nearby mines. When Tartars failed to elicit the out, they made a fires in front of mines and smother all inside.

The first written mention of the town is charter of 1241, which mentions Lwbete villa.

Ľubietová history from the period just after the unknown, further reference is to the advanc

ement of the city of King Louis the Great in 1379 The further history of the rulers got Ľubietová different rights (mill, slaughterhouse, spa house) and freedom (from paying tolls, ground movements, free trade) for its citizens. In the 16th and 17 century village suffered from Turkish invasions, insurgencies, ethnic strife and plague epidemics.

In 1564 on the square was built castle, which was originally intended to defend against the Ottoman Empire. Until it is, however, the Turks never got. The name recalls the location above the village - Picture - is the place where the Turks came closest in the past there was a picture painted on the plate. Turkish war remands also the legend of the hero Vavro Brezulovi who is one of the book hero of writer Božena Němcová.
An important milestone in the history of Ľubietová was in the revolutionary years 1848 - 1849 Hurbanov uprising, which began at the initiative of coming right away.

In the past Ľubietová was famous by wealth of ore. Mined here are gold, copper and iron ore, the raw material was the most important copper ore. The last mention of the extraction is from 1872. After the decline of produce copper the city focused on the extraction and processing of iron ore. In 1692 there was even built the first blast furnace in Hungary and in the local foundry components were produced the first steam engine from 1722, which originated in New Bana and served on pumping water from mines.

After the decline of mining is started develop agriculture and crafts. Thanks to the quality of pottery with pottery came to the fore. Local potters produced more than 50 kinds of products especially in the winter and spring, leaving the homes to sell their products in the markets. Pottery it is past now.

Beekeeping has a long tradition in the vicinity of the village Ľubietová. From time immemorial belonged to the collection of wild honey bees from inside the hollow tree, next to agriculture, hunting and fishing among the main sources of livelihood in the area. In addition to households, the city operated a factory farm bee Čelience since 1716.

In the village there are many cultural monuments of national importance. The first of them is the

Evangelical Church of Augsburg Confession, which is located in the village since 1807. Its reconstruction took place in the summer of 1899 and brought the church of pseudo-elements. Today, temple has only the original walls. In the church, among other things, you can see copper baptismal font and chandelier, donated by church workers from Podbrezová, Hronca, Lubietovská Huť.

Another gem of Lubietová is Roman Catholic Church of St. Mary Magdalene standing in the north of the village. The original church was mentioned already in the 14th century. Today he recalls only a Gothic entrance portal, otherwise the temple bu

ilt in the Baroque style (bears elements). The main entrance is an imposing tower, standing on two massive pillars and the whole church is surrounded by a wall that would have needed repair.

On the square stands a statue by sculptor Joseph Messerschmidt Ihrinského Quarter of 1934 which is memory of man who helped in the enhancement the place before the First World War.

Also noteworthy is the Chapel of St. Jan of Nepomuk or Rococo burgher house situated in the village.
Today he lives Ľubietová many cultural and social events, sporting events, markets and various folk performances. The local folklore is known particularly for its cooper's dance, which has no precedent and the Slovak Republic is a relic from the times of the German colonization of mining towns. Surroundings attracts people enthusiasts by travel in nature and breathtaking views of the surrounding hills.