This originally hunting chateau was built on place of former Middle Age fortificated castle in a valley of Slaná-river, in Košice Region. Today´s face of two storey building of romantic style, with four small corner towers, corresponds to extensive building arrangements at the end of 19th century. Later, after 2nd World War, this residential seat was changed into a museum of historical furniture and way of living. Now, after detailed reconstruction within 1990, the castle is, since 1996 under supervision of Slovak National Museum.

This small chateau of Betliar is surrounded with one of most beautiful and greatest park of English style in Slovakia. You can find there and admire scarse wooden trees of exotic origin, but also local oaks and pine trees. Moreover, you discover there the biggest magnolia in Central Europe. However, several pieces of old wooden trees were destroyed by a gale in summer of 2010. Inside the park, a waterfall, cave and three fountains are situated. In past, two fountains were used as basins for bathing. The park served also for hunting as well as various sporting activities, such as cricket or lawn-tennis. Nevertheless, now, you find there, on place of tennis court, only green meadow with so called Chinese pavillon, where sporting instruments were kept. 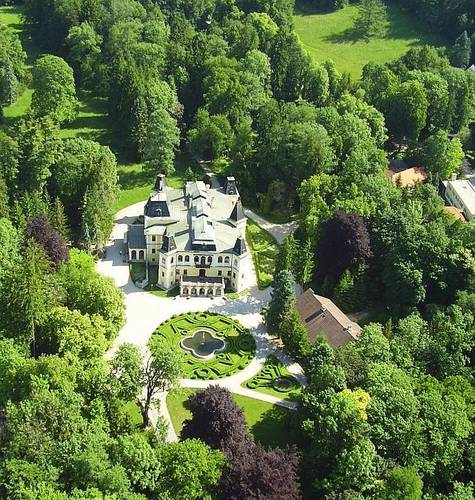 Slovak National Museum - Betliar Museum - is in charge of three permanent exhibitions, as follows: Betliar Chateau, Krásná Horka Castle and Mausoleum in Krasnohorské Podhradie. So, the exhibition in rooms in Betliar is specialized for way of life and furniture culture of Hungarian aristocracy of 18th and 19th centuries. This collection was established from original furniture sets and artistic collections of Andrassy Family members. The complex is formed with nearly 50  residential rooms, including other spaces, such as eight bath-rooms, cloak-room or working and living rooms.

At present, the Museum is keeping in safety approx. 25000 collection subjects. To most interesting ones belong souvenirs of former castle owners from their trips abroad, such as: hunting trophys from exotic animals, an outfit of Japanese samurais or two ancient mummies. One mummy, approx. 3000 years old, comes from New Empire time period, presenting earthly remains of Egyptian King, which served to God Amon. The second mummy belongs to a child, mummified by means of technology, known under name of „carton“. Another important part of the exhibition is formed with historical printed matters and manuscripts of 15th-20th centuries in several foreign languages. Even a collection of newspapers and magazines is numerous. It contains European as well as American titles, from dailies, via different specialized magazines up to sporting, hunting or fashion magazines.