en.infoglobe.cz » Indonesia: No It Did Not Burn Down XII – Lombok: The Night at the Anak Lake and Mountain Descend

There goes only one road into the crater from this camp. First it descends steeply. It is stony and sometimes water hollowed it out, therefore, it could be difficult to walk there. Then there is a turn which leads up the hill. One cannot even believe that it really goes towards the lake. Fog rolled around us so we couldn’t see how far we have to go and where we are at. 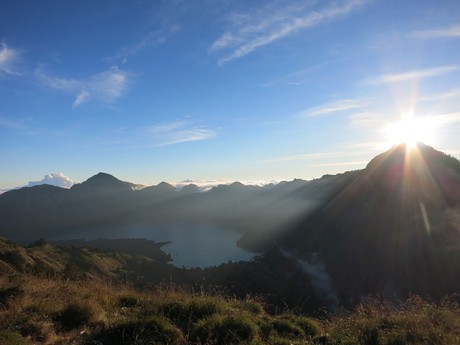 Finally we spotted water surface of the lake (it took about three hours to descend). Once we got closer, however, we realized the bank of the lake is littered. Unfortunately, this is normal in Indonesia. It is common here to throw out your litter. One naturally picks up trash here but it doesn’t help much the overall situation. I really wondered how one can pollute nature which is so beautiful. 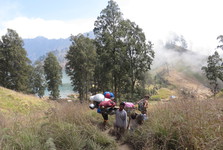 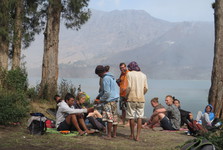 People camp along the lake. Fishermen sit around. Hot springs didn’t come amiss as dirt and dust was all over us. 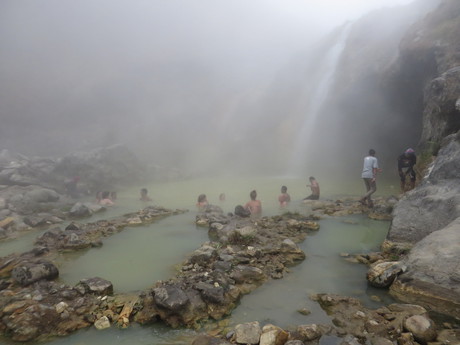 The night at the lake is very pleasant and it is much more warmer than at the edge of the crater. We enjoy the view of Baru, a small volcano (2 363 m). It is interesting to watch fog rolling over. You don’t sleep every night at the lake. It depends on the group or decision of your guide. People often stay over night at Senaru Crater Rim camp. It takes about 2 hours and 45 minutes of steep climb along stony pathway to get there. We were really grateful that we didn’t have to climb this as our day was truly exhausting. But the following day was even more so. The hill isn’t so steep but climbing and descending it takes much longer. It was a pity that we didn’t sleep in the second camp because we would enjoy beautiful view of the sundown. 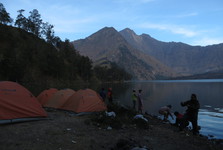 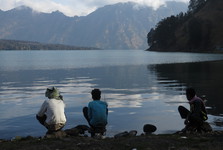 We woke up at 4 am. When we finished eating our pancake we set off up the volcano. We passed by tourists going in the opposite direction. We also passed by runners at the extreme Mt. Rinjani ULTRA race (try this in case you find normal climb too, well normal). We walked between tents which tourists built on every flat spot available. You can build your tent almost anywhere you want. You have to just talk to your guide. 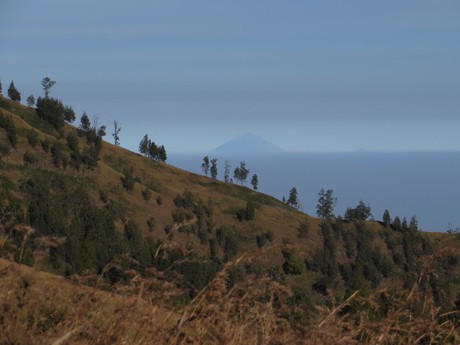 And what it will be like to descend from the volcano crater to 600 meters above sea level? You can learn next on next Monday.