en.infoglobe.cz » Indonesia: No It Did Not Burn Down VIII – Bali: Perfect Scenery at Batur Mountain

And so it starts – a long road going up endlessly. We feel cold veiled into thick fog. We are approaching Batur volcano. The first opportunity to see its huge crater is at Penulisan village. The view is perfect given partially by the fact that you won’t expect it. The second largest lake on Bali (1 050 meters above sea level) creates the bedrock of the crater. Then there are some villages, thermal springs and Batur volcano in all its beauty. 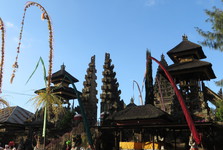 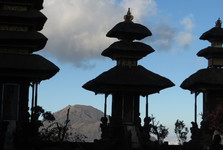 The road goes on southwest along crater’s edge. There is the highest temple on Bali – Pura Tegeh Koripan (don’t let local ladies fool you and sell you expensive tickets). To be there during their holiday was true luck. A parade of women dressed in colorful dresses wore bowls with sacrifice on their heads. Batur mountain, a bare volcano with visible lava traces of 1917 and 1926 eruptions created background to the whole scene. One really take a moment to get fully immersed. Especially when you realize Batur and Kintamani villages and the temple as well were flooded with hot lava back then. People who survived built both villages and the temple again at the edge of the huge crater. 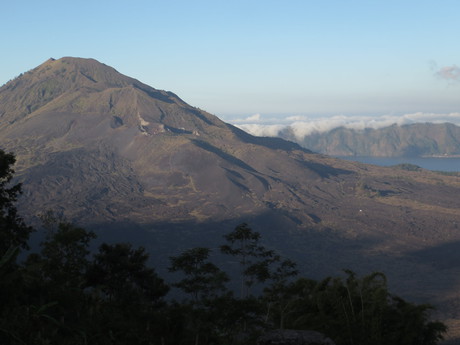 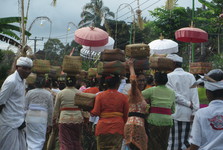 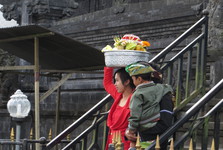 The crater is interesting for its scenery. But not only for that. Also, volcanoes there are still active. No one knows when they erupt next. When looking at that beauty we suddenly noticed the summit of Agung (3 142 meters above sea level) peaking out of the fog. We decided to climb to its summit. 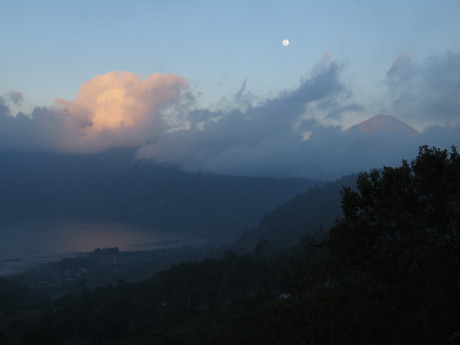 We planned the climb for the following night. Two roads go there. One from Besakih up to the summit (from the south). The other starts further in the east. The route there begins at a car park in the forest and ends below the summit.

It was really difficult to find any means of transport to Besahih. Fortunately, we found a driver. He would take us there from Legian for 400 000 IDR (about 800 CZK). Travelling around Bali is strenuous task every time even in short distances. Traffic is really dense. Our road goes also along rice fields (particularly beautiful are those around Sidemen). 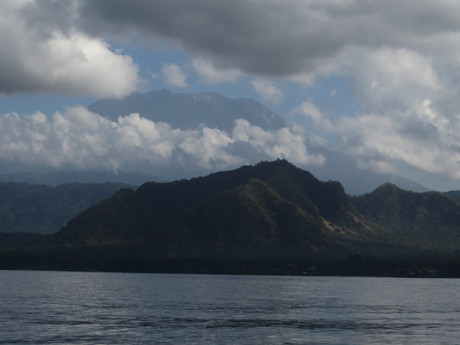 Two hours of ride later we stop at the gates. There are two men in suits asking us to pay them for us and a guide 1 000 000 IDR (about 2 000 CZK). We starred at them shockingly. We knew that you have to pay something for a guide (Agung volcano is sacred and they don’t want people to go there without a reason). What we didn’t expect was to pay one million rupees. We managed to lower the price to 750 000 IDR. Which was still too much. Unfortunately, the problem was that we had come by car not by minibus. Eventually the summit of Agung did not see our footsteps. We had to pay another 200 000 IDR to our driver to drive us to the port. Ships to Lombok are anchored there. So, wasted time and money sometimes are part of travelling.

A climb which would take us several days would lift our spirits. We would climb Rinjani volcano in ombok. Next week you will understand why we had to spare some money. Don’t miss this fascinating climb in marvelous volcanic landscape.