The city of Hierapolis is located near thermal springs in Turkey in Anatolia . It was constructed according to plans known as  Hippodomes (grate plan), except for other things there were also public spa and local redundant water was led to households. Healing springs were well-known for their healing effects on rheumatic and neural diseases, clogged vessels and irregular blood pressure. Monumental constructions of the city, including a shopping mall, were on the main avenue.

In the northern part of the city you can find a main gate built by Emperor Domician. According the then tradition there was placed a cemetery in front of the main gate. The city center was devoted to entertainment - mainly festivals in tribute to god Apollo, athletics competitions and music Until today attempts to find out the exact foundation date of Hierapolis however, extant documents say Pergamon King Attalos III left his kingdom, including Hierapolis, to Rome. Another interesting thing happened in the year 40 A.D. when one of disciples of Christ’s Apostles, St Phillip, was killed there in 87 A.D.

The most fascinating period of Hierapolis happened during the rules of Emperors Antonius Pius, Septimus Severus and his son Caracalla. During the rule of Emperor Constantinus the city flourished. 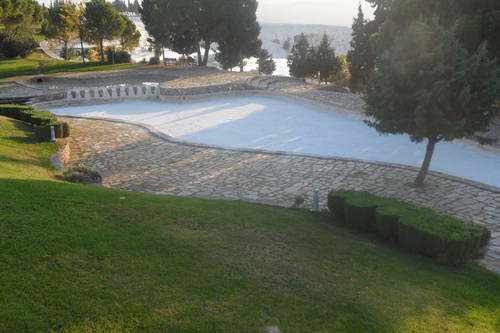 The land was troubled by a large and devastating earthquake that cause gradual decay of the city. Eventually, the city was destroyed including its fortification. Its new walls were built only the rule of the Roman Empire and they had an important role such as defense against the Turks.

The city perished around the year 1354 A.D. when it was totally destroyed and damaged by mutuall wars and natural disasters. The inhabitants of Hierapolis were leaving and moving off the city and this ceased its existence. 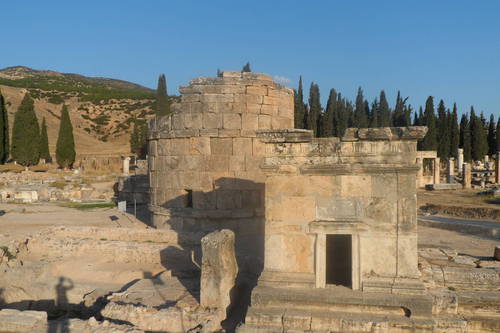 Pamukkale (a cotton castle) is an area with thermal springs and is part of Hierapolis.  The springs are springing to the surface north from Denizli and on the south side of Salpak mountains and flows across four kilometer long terrace, thus they create a unique beauty of local lakes. The springs are springing to the surface from various places and from time immemorial they left calcium sediments and they create so-called travertines. Today, lakes with springs are protected and if you want you can enter these lakes, it is allowed to do so without shoes. I had tried that but I didn’t feel I became younger.

Along the whole Pamukkale to the main gate of Hierapolis and the cemetery goes a very nice walk 4 kilometers long. In the course of time you can admire not only Pamukkale’s beauty but also partially uncovered ruins of the city of Hierapolis, once very beautiful city. 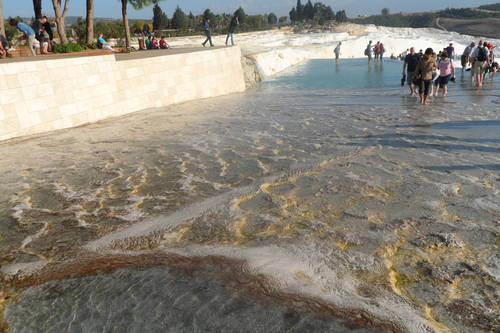 Right by Pamukkale there is possibility to refresh oneself and to sit down for a while- By a box office in front of the entrance you can see some stands with souvenirs with any kind of goods including a book about Pamukkale in the Czech language. It is better to not to left your shopping for the last minute but the most important things you can buy in larger cities where prices are much lower. However, if you buy a book for any price you will find out you make a good deal. Not only you will have a souvenir but you will learn many new information, very useful if you don’t have a guide. Pamukkale is a part of the UNESCO world heritage.