The downpour have just started. I quickly go to a museum but on my way there, I am admiring and taking pictures of another beautiful building - colonnade. I enter the museum bit wet. There are beautiful pieces – examples of local plastic art. I am excited about the museum and it is clear that the goddess of love still influence people with her spells. 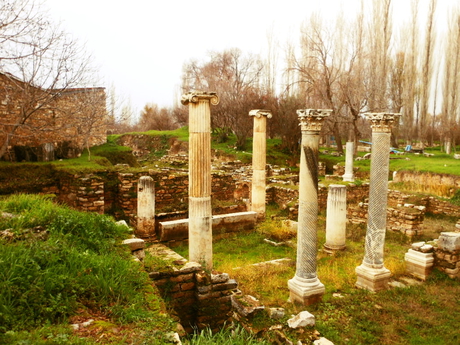 I travel to the town of Denizli about one hour from there. Then it takes only ten minutes to the village of Pamukkale where I have accommodation in one of thermal hotels.

Even though I have already seen Pamukkale, well that large limestone canyon, I have to go there again. This time I am heading to the trade town on the trade routes crossroad, Laodikeia. Many miss it because of Pamukkale. It was founded in the 3rd century by Antioch II who named after his wife Laodikei. He had two sons with her. 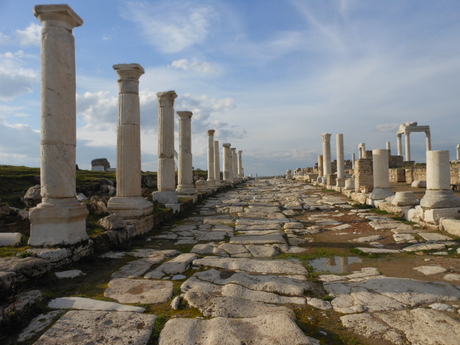 I start tour in Laodikeia at the Byzantine gate, from where a marble road goes from. The road stretched from the Syrian gate behind us. As the town decayed it was getting smaller to better defend it against its enemies. The road is in perfect shape, decorated with column on both sides. Below, we sometimes see holes indicating that sewers are underneath. Then, we pass by a temple on the right side. It is probably devoted to the goddess of luck - Tyche. Archeologists still work there so things are not still clear. Then, on the road to the left, there is a large agora, and the Septimus Severus nymphaeum on the right. I don’t know what to shoot first. In the distance, I can see distinct dark clouds with sunrays going through which only intensifies the atmosphere of today’s afternoon.. Marble was very colorful, water bubbled everywhere, and the pavements are decorated with mosaics. People must have been prosperous in here. I don’t even have to close my eyes to imagine the life here… I walk through the nymphaeum around ruins. Nobody identified them. I walk to a beautiful Hellenic theatre for 8 000 people. Sun is setting, thick sunrays shine through the clouds as some divine message. As if the gods are watching us. 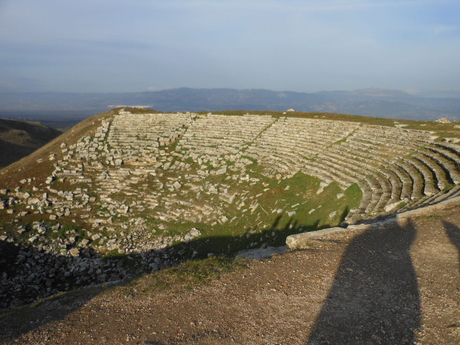 There used to be an important Christian town mentioned by John in the last book of Bible – Revelation. He had to rebuke them because they were not so eager and became lukewarm just like the water flowing into the town. 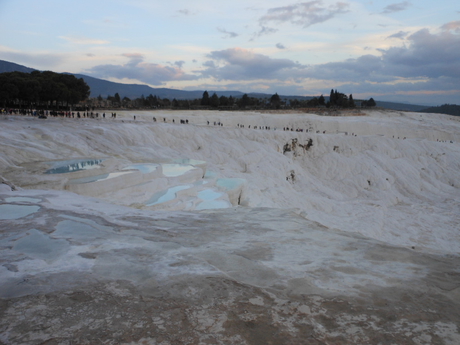 Then I am going towards buried Gate of Efes and the Roman spa. I slowly return to the main gate with my head wondering in the skies. I have to hurry to see my favorite Pamukkale during the sunlight. I am taking pictures almost in the dark. So the pictures have some mysterious atmosphere to them. Then, in the dark already, I go through the town of Hierapolis to Necropolis burial grounds through which I have to walk… It is already complete dark there so my feelings are quite interesting among sarcophaguses. I have goose bumps… 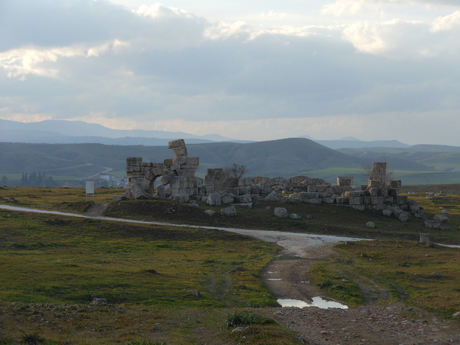 In the evening, I am having a bath in a thermal pool. Once more I think about the places I have visited in this beautiful region.