When I entered this historical city it was around one o’clock. I enjoyed delicious kofte (Turkish meat balls) in a village nearby. Then a tourist tractor took me to the gates of Afrodisias, the center of art which was famous for the art of sculpture It seemed the statues want to move and speak. First I fallow a stone marble path up to the gate of Tetrapylon which separates the non sacred road from the sacred road going to the temple of Aphrodite . Many pilgrims traveled there to honor the goddess of beauty and love. Not just anyone was allowed to enter the sanctuary, only priests and priestesses. Impunity assured within temple walls so many of those serving were fugitive criminals. Normal pilgrim could put his gifts on temple’s main yard and leave. Monumental Aphrodite statues stood in the middle. 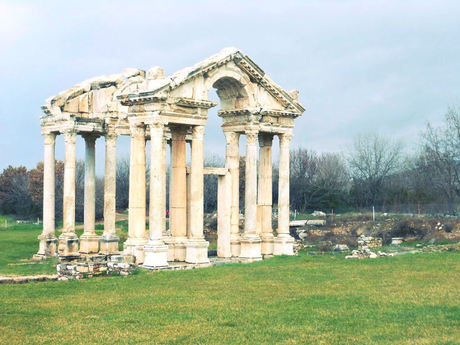 So what was up with Aphrodite? The legend has it she was born of sea foam. Naked and radiant she sat in white seashell pulled by doves. Sweet and gentle western wind of Zefyros took her to the island of Kythera. Yet she got off on Cyprus. Her beauty made her one of the most powerful goddesses. Mortals and even gods couldn’t resist her …

From the temple, you can follow a beaten road. After 10 minutes you appear at a large and well-preserved stadium for 30000. I was astonished by it. In the fornt part, a specially build space looking like a stage stood. There took place fights of gladiators with wild animals. 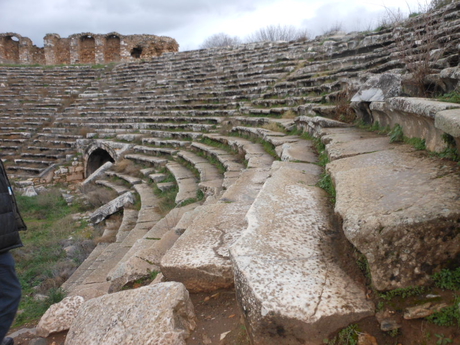 I go further following a road to the town. Then I reach local spas with beautiful pool decorated with a torso of a man. Right next to it is grandiose Portico Tiberia with a pool of 265 meters! So 5 times of an Olympic size pool. It is 60 meters wide but only 1 meter deep. There used to be marshlands so they used water from there for the pool of Portica. Water was then redirected to the spas. 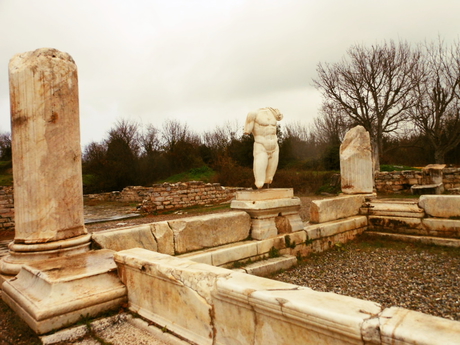 In the Byzantine Age, the archbishop had his residence here. He changed the name of the town to Stavropolis in the 6th century. It means the town of cross, it was supposed to expel pagan goddesses. Yet they didn’t make it. The people of Afrodisias loved their old gods too much. Later the name of the town changed to Caria and today its called Geyre … 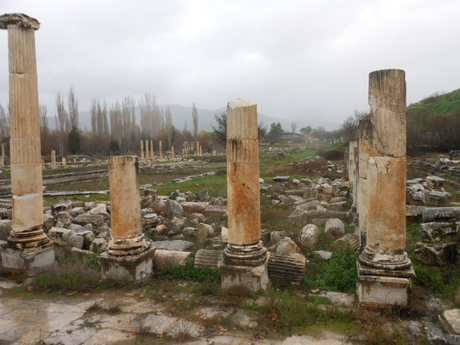 I go straight up across beautiful Odeon for 1700 visitors. It was even roofed. Then I climb a hill where the oldest settlement dating to pre-Afrodisias times in the 5th century was found. Then there is a beautiful platform where I can see the whole of Portico, and a really long pool which is not done yet. My breath is take away... 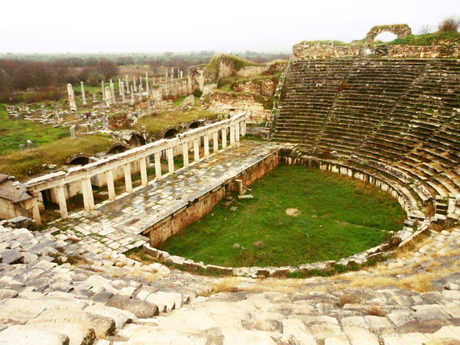 To the right, wee see a theatre in great condition. Only 8 000 could be there at once It originates in the Hellenic period. It was renovated in the 1st century BC. Inscriptions suggest it was devoted to Aphrodite and the people of the town. Stage part of the theatre was divided to six rooms, probably dressing rooms. In the 2nd century AD, the theatre was renovated so gladiators could fight animals there. Under the Seljuks, people built houses at the bottom of the theatre, well stage, in the 11th century. Well, they lived on planks that mean the world… They used even marble from theatre’s construction or local buildings to build their houses. Barbarians…