It had contra effect to us with Milan that we slowed down the package. It annoyed us because we have saddles upon crossing felt like we had just gone on the bus. While we waited for a few days walking pretty scenery and there was no need to spoil it. Even while we are thinking about letting Hari go faster and we will extend our staying even. We had an idea when we move from the Manaslu Conservation Area to the Annapurna Conservation Area, we have no reason to hurry because permits and we could stay there little bit longer. Then we realized how it probably will look at the Annapurna trek, it will not be quiet, villages without tourists, as at the beginning of our journey. So we decided to go according to plan with Hari in Kathmandu and a few days that we left with in Nepal, we will spend some part in the city and somewhere in the mountains around Kathmandu. 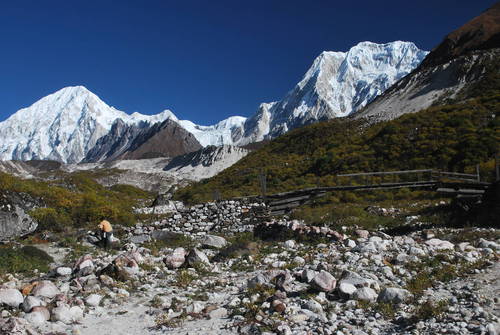 Canadians ladies, who we met the day before, set off just before us. After them, we stepped on the path behind us and we started coming back crowds of tourists. I didn’t feel good, but on the way it got much better, and I felt perfect. First, we crossed the river, which had the colour of milk and rushed down sharply from the mountains. On the bridge Milan fell into the river bamboo stick, which was all the way to replace one of the trekking poles. Right at the beginning of the trek he found out that he forgot the one of sticks broke a on the trip in Ukraine, and couldn’t be fixed.  Hari then gave him this bamboo stick, which seemed to be ideal and that he lost, unfortunately. He did not mind that much because he still kept the second trekking pole. 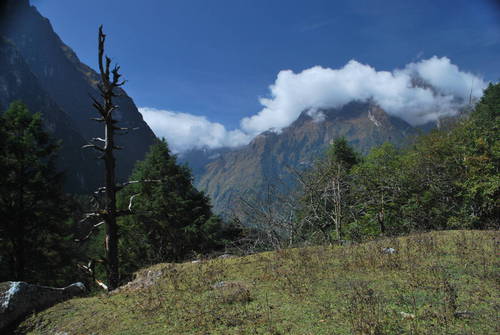 After we crossed the river, we had to climb a hill and then the way was long, but not steep downhill. After some time we declined to the beautiful fir forest. On the opposite hill the forest was burned and Hari said it is quite usual in winter, when every spark can cause a fire. The forest was really wonderful, I felt as good as anywhere in Canada and I really liked it. It was changed rapidly, and soon pines were replaced by firs. At the end there was again changed and we walked through the forest, where trees grew remarkably reminiscent of those around which we used in Peru, on which grew a beautiful bromelias. There weren’t any bromelias. We saw but a lot of rhododendron trees, which unfortunately do not flower this time of year. We could see lot of marijuana plants again. 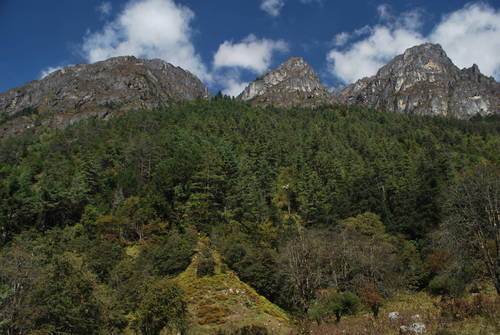 Hari offered us a lunch stop in one village, where lot of tourists were everywhere. We weren’t hungry and we did not want to stay in such crowds, and so we went on to the village Surko, where new balconies built. Otherwise there was nothing. We had good food (pasta with vegetables, called čaomin), let the crowds pass and moved on. We marched about five hours, till we got to the village Tilche, places our contemporary hotels. We checked in just repaired the loggia, which was really luxurious. Even they warmed hot water to bucket, so we could finally wash. 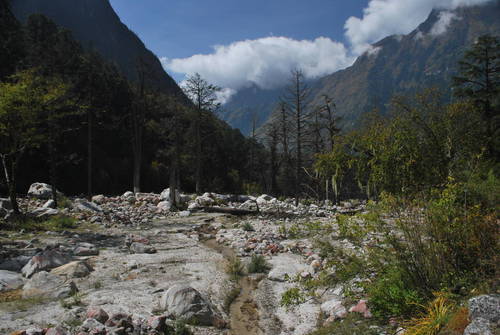