We could still enjoy the magnificent views to the mountains around. Views of Mount Samdo (6335 m a. s. l. ), which appeared in conjunction with Panpoche I (6620 m above sea level) just like Salcantay Peru, where we were last year enthused us to our joy was accompanied throughout the journey. We saw and still Manaslu. We noticed that the glaciers that are drawn on the map as a fairly extensive, there wasn´t almost visible.  They melted. We sent Hari ahead to book us the loggia. He went and then came back to get us and after we continued together slowly. 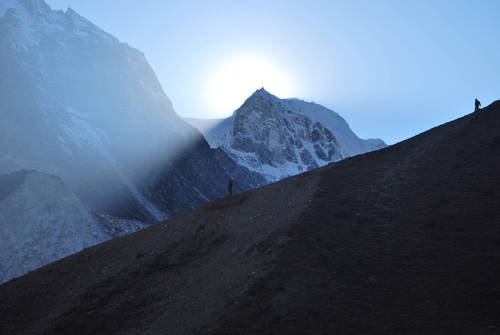 In Dharamsala we lived in a tiny room with a stone floor. Hari said that it's still under construction, which was probably true, because we heard that there loggia to tourists this should be open up in spring. When we got back home from Nepal, we heard that a few days after we were there, Dharamsala was attacked and since the time the loggia again does not work. More details, we didn´t get. Now there was certainly more than 60 tourists, most of which anyway slept in tents. 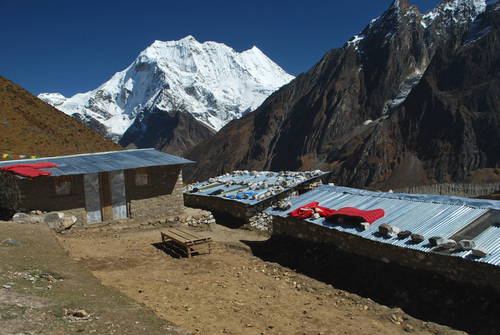 We went to bed at six pm and alarm clock woke up us at half past three in the morning. We had garlic soup for breakfast and at a quarter to four took to the saddle. It was amazing the moon, that was not nearly full, shines or our way. Lights up the surrounding mountains and created an unforgettable atmosphere. We got the first in a row and we could see lights indicating more tourists. We called them "head lampers". We do not use front panel, it was not necessary because of the month. We climbed up and I'm out of breath. I had to stop so I relax, but somehow I didn´t mind, I felt great. And even when we stopped, we still went faster than “head lampers”.

At each stop we had to drink, to comply with alpine drinks. But it was not so easy, because it was freezing and the water in bottles made ​​with ice floes. It was not for my sore throat very best. I always heated water in the mouth before I swallowed, but after two gulps I had a mouth full frostbitten. The path was by no means extreme, steep climb alternated with a slight incline. When it was light, we noticed that we are moving along the glacier, which was hardly visible due to deposits of stones and dirt on its surface. It was basically recognizable only by the crack, which showed through the blue ice. We met a stone cottage, which was not inhabited. Hari said that it seems the people move here in the summer, when the rainy season is. 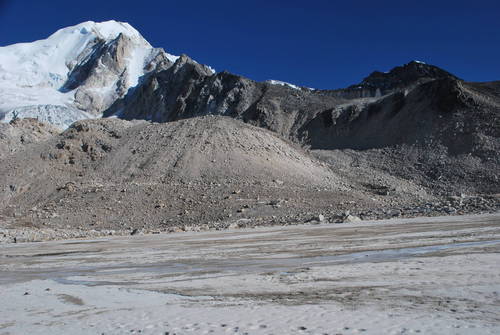 The way to saddle was beautiful. We got there in five minutes to nine as the first of the tourists. In front of us were only five Nepali porters who prevent us along the way. Milan on the GPS measured the seat height 5170 a. s. l. (in the map is 5220 a. s. l.). We immediately took out our Buddhist flags and started taking pictures with them. Then we set up two columns Hari, the flags that we have established. Then she began to pour into the saddle the first tourists, and then another and another. After a while the seat was full and we were glad that we who can at least enjoy a moment alone. We had two top chocolate. Then we sang to Hari moravian song  - Tancuj, tancuj, vykrůcaj (Dance, dance, and twist) and he dance with us, then we exchanged roles - Hari sang and we danced with Zuzka. 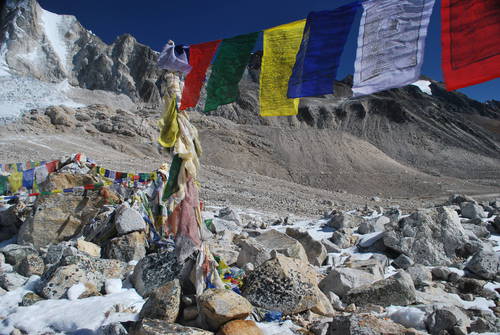 All tourists who came there were taking pictures especially with our flags. They were built across the road is bright as new. Also the Mongolian men passed underneath on mule. He had mountain sickness, but we did not understand why he went to the saddle at all, because he was apparently already badly in Dharamsala. Due to the terrain then he had to get off a mule, and Milan gave him medication. As it turned out with him we do not know. We didn’t meet him anymore.