In the morning I was awakened by rattling sound. I got up and went out to see what happens. Not far from us, stood a helicopter and some men loading something into it. Then lifted and flew around Manaslu, which was lit by the rising sun. I had no camera with me and I chattered like hell. After a while another helicopter arrived and then another and another. As we found out, the season at the top of Manaslu was finishing and helicopters took away climbers and their gear. 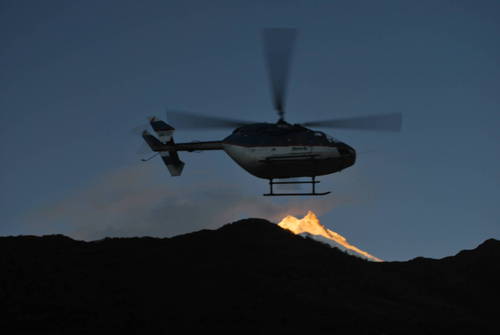 The plan for today was to go to Manaslu base camp. We said goodbye to Pavla and Janek went on our way. But we chose the pace slower than slow, we are still taking pictures and admire the views of the eight-thousand, which was slowly enveloped in the clouds to reveal a moment again. Hari of us began to get nervous and asked if you really want to base camp happen. On this we replied that we go and see how far we get. We walked around the beautiful glacial lake. We met through a lot of people going away from base camp. Among them was a Czech guy, who told us that it does not make much sense to go there, because the season is finishing, the camp should be cancelled and moved down soon.

About the truth of his words we were able to convince when we went on. When you steeply climb zig-zag on the path we met crowds of carrier, who carried tents, kitchens and just the whole camp down to the village. Among them were both men and women and even children. Among them were also quite elderly, and all wore impossibly large and heavy loads.

Hari pointed us to the plant, which burns at Buddhist ceremonies and which is called “sunpátí”. We saw it burning during the ceremony in Lho. We heard also fall landslide that had to be really powerful, because it sounded like thunder long and strong. We saw a beautiful eagle, which flew directly over our heads. Milan wanted him to shoot a video, but forgot to press the button will and he was then all poisoned. He said he had just managed to focus it well. 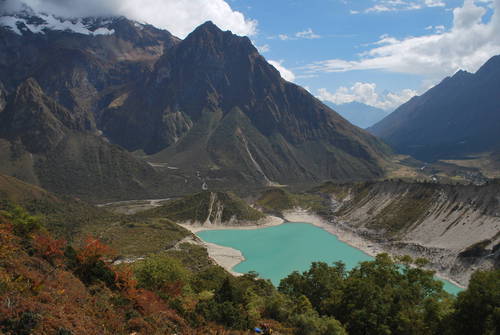 We finally didn´t get to the Manaslu base camp. Firstly, we were lazy and still we stopped, and secondly, the clouds began to do, where and finally hidden base camp. So we turned and went back. I was a little disappointed, but what to do. It was all about conditioning and some that we did. After returning to Samagoanu we had lunch and went to look in the local Buddhist temple. Although someone was inside (lights there), it was impossible to get there. In the evening it was pretty cold, so we went early burrow into warm sleeping bags.

The journey from Samagoanu to the village of Samdo (3690 m asl) was relaxed. Almost all the time it was straight after a relative, only to end we had to overcome steeper hill. Along the way we saw a group of marmots. We watched them for a while, but soon discovered us and disappeared into the holes. My camera was able to get it due to long distance. Again we have seen an avalanche fall. Apparently it looked like it was terribly slow its fall, but in fact it must have been enormous speed.

To the Samda we arrived early and stayed at the Yak Hotel, where we got a nice room. We were happy because we were going there to spend three nights. The hotel also had a canteen where they could sit and play cards. Nowhere is drowning, but not particularly mind it. The dining room was soon breathless and thus heat up a bit. The only place where it was really warm, and there was a kitchen we did not have access. Hari but might there and I spent most of his time there. 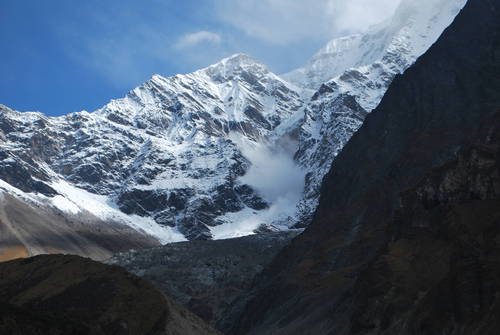 When we ate, we thought that we would go somewhere and so we went. Frenchies, we met again here (last time), told us that they went a bit over the opposite hill, and it blew a lot. Advise us whether there would rather go in the morning, but we decided to go now, because the next day we had already devised the program. Hill called Pana Danda and has over five thousand, but we arrived only about four and we were happy. On the hill flying Buddhist flags and would be a nice view of it, if not the surrounding giants largely in the clouds. Still, there were nice views and we were happy. Another day acclimatization trip in the direction of the Tibetan border waited for us. 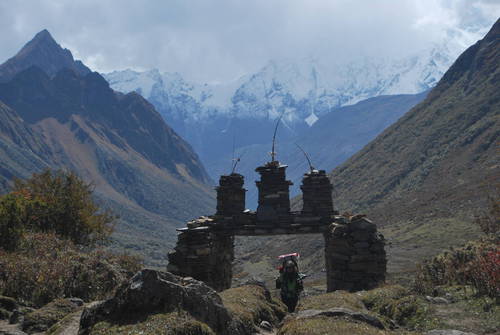