It was a sign that the climate begins to cool. We had a break for a while. Hospitable villagers brought us plastic chairs to feel us comfortable, and later they disappeared with Hari inside one of the little house. He kept in with local people. As we later read from books purchased in Kathmandu, living in this region, these people were members of his nation. While Hari mingled, we observed village life. It seemed that this day is public washing, because around the stream and tap water there were lots of kids, who laundered. Occasionally they had an argument, as when a little girl occupied the place of older boy. Among the workhorse was not really an adult either. We noticed also that in this region often older children assume the role of parents, the care and back wearing their little siblings. 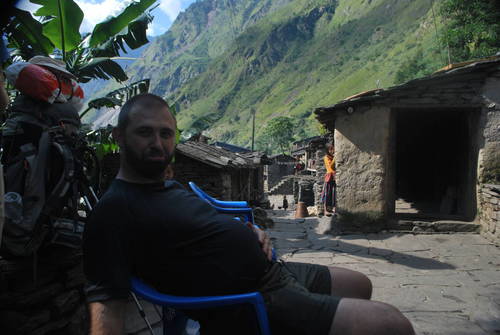 When Hari testified with local, we continued on. Before the bridge leading over the Buddha Gandaki was funny police station. She looked more like a larger outside toilet. It was a check point where we had to register. In addition to the village Philim, where we gave lunch, led a fairly steep hill, where I was pretty breathless. Philim has altitude 1590 above the sea Lunch was good, but for my taste terribly hot. It was pasta, here called macaroni. It's not macaroni but as we know (the thicker hollow spaghetti), but basically any pasta except spaghetti, which is also called spaghetti here. They were fried with vegetables. I thought my mouth burn, as well as my stomach wasn´t that happy for the experience.

When we order after waiting for lunch, got our Czech friends we met last day in Jagat. They plan to spend the night in this village and the rest of the afternoon hike to local Buddhist temple. I quite envied them. 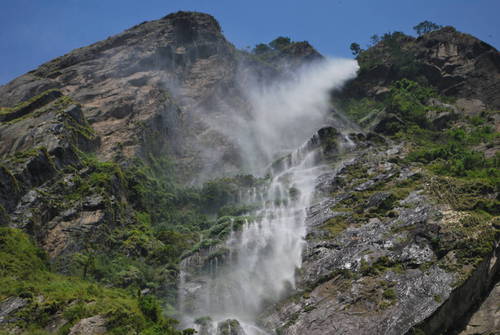 We had originally planned to finish in Philim the today, but on the advice of our guide we rethink the itinerary and went on, Deng's direction, which is situated at an altitude of about 1800 m above sea level but because we gave lunch and digestion, and even temporarily on the way we do not belong to speedy, until we experience Deng had missed and we ended up in a village called Pewa. The terrain was as good as on a swing - up and down. Of course with more climb. Along the way we saw the first 7thousand high mountain - Shringi Himal (Himal means mountain), which reaches up to 7165 m. The landscape we passed through was again a bit different and really beautiful. We felt as if we suddenly found ourselves somewhere in the mountains in Canada. After some time the environment changed again and we went to a regular jungle, even though we went on the road and we did not have his way through the thicket. It was an interesting way, but long enough. Backpacks on our backs were heavier compared with morning. 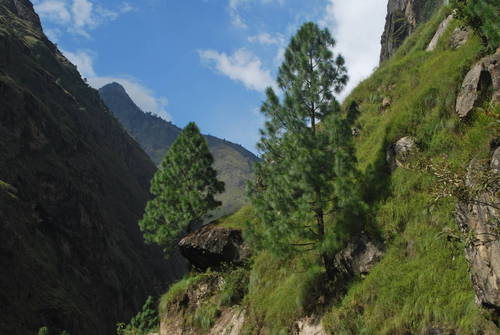 In Pewee is built brand new loggia. Still smells of freshly machined wood. Nobody, except our group, it was not. As we waited for dinner, went to practice with Zuzka eraser back into the room and came up with the fact that rooms are full of cockroaches. We weren´t happy about that, but what you can do. We just hoped that we do not care to sleeping bags and backpacks and shall have it with you. We cooked dinner again Hari. They hadn´t almost no primary commodities, but soup and baked potatoes were enough for us.

Pewa became one of two potential sites, we suspected that one on me and Zuzka flea jumped. Milan was immune, and didn´t find any sting on his body. Zuzka was bitten about six places, and I was covered in bites right and I was scratching for the rest of the way. We worried with Zuzka to take these monsters to Czech Republic, but fortunately at the end of their stay in Nepal disappeared. 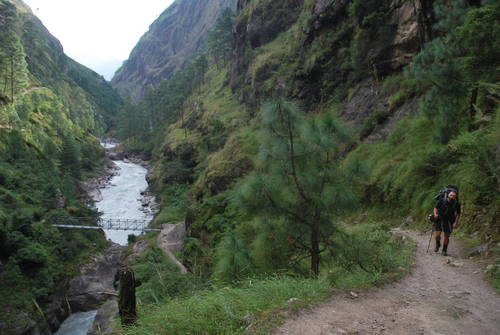