Plague epidemics gradually spread throughout Europe. They did not bypass Hungary either, and thus the rich mining areas of central Slovakia. In the years 1575, 1601, 1645, 1679 or 1710, their rampage claimed thousands of victims. As a thank you to God for survival and protection from further destruction, plague pillars were also built here. It forms a kind of spiritual bridge between heaven and earth, by which the people plead with their supplications. 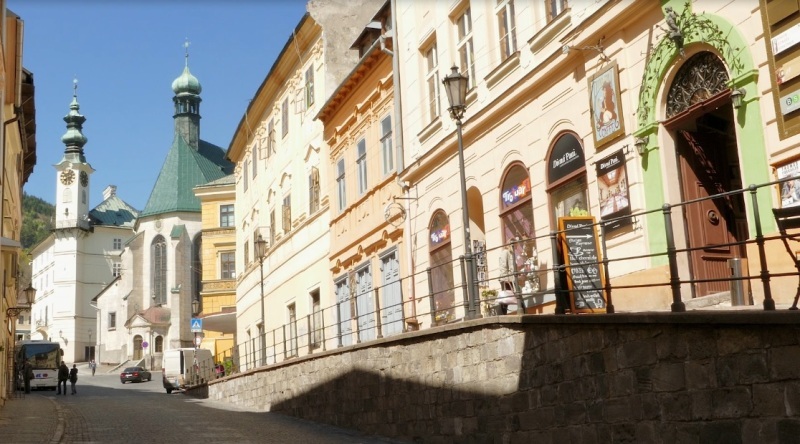 Only rich cities could have their columns made of more durable stone. Their pomp is based on the Baroque period, which was the so-called golden period for these cities. And although the columns are among the sacral architectural monuments, their construction was mainly contributed by the townspeople or the nobility. 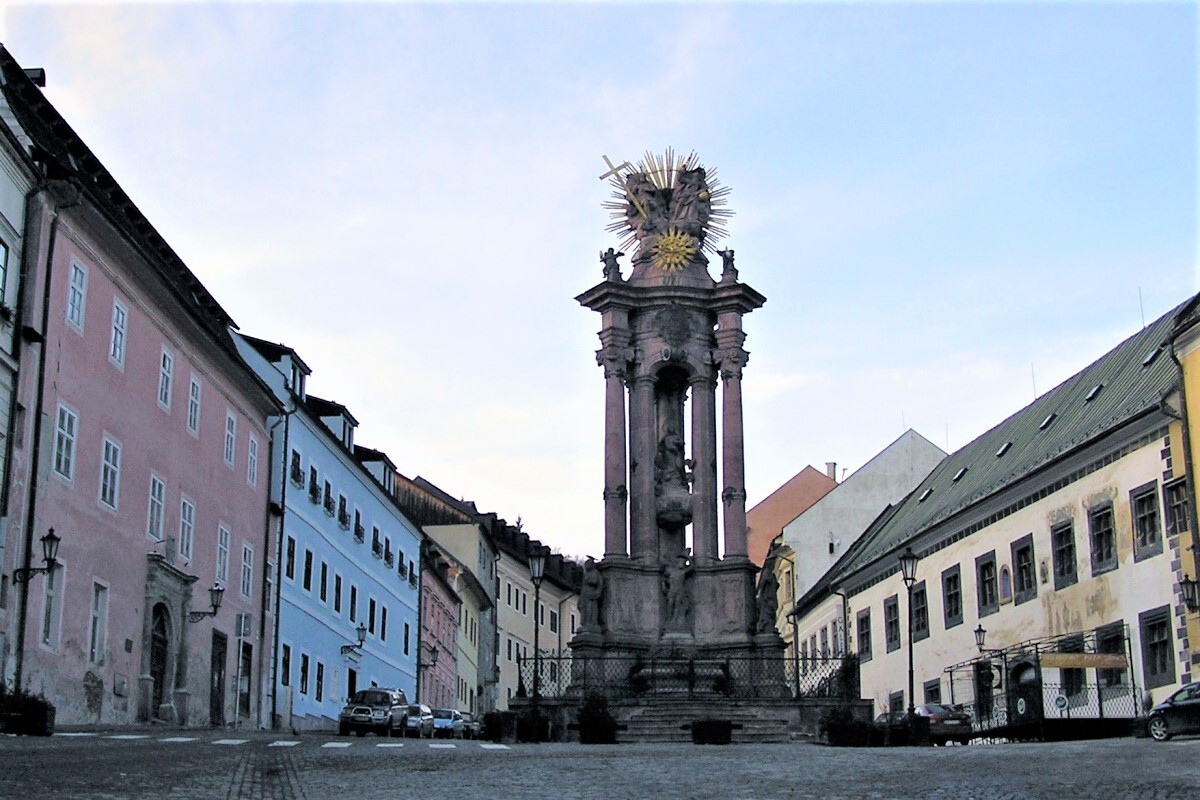 Today's area of the Banská Bystrica diocese includes the location of the former important and rich Central Slovak mining towns. 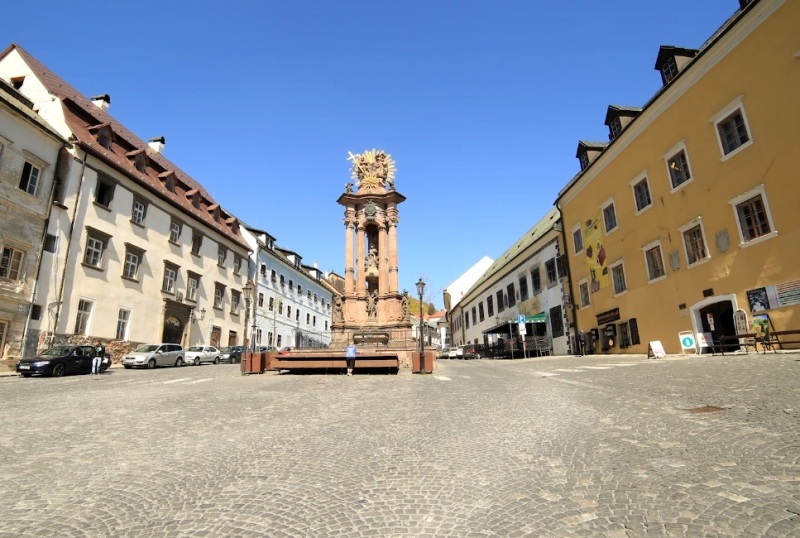 Such an attribute belongs to Banská Štiavnica, a tourist-interesting town in the middle of the Štiavnica Hills. The city center is the Holy Trinity Square, surrounded by magnificent buildings. 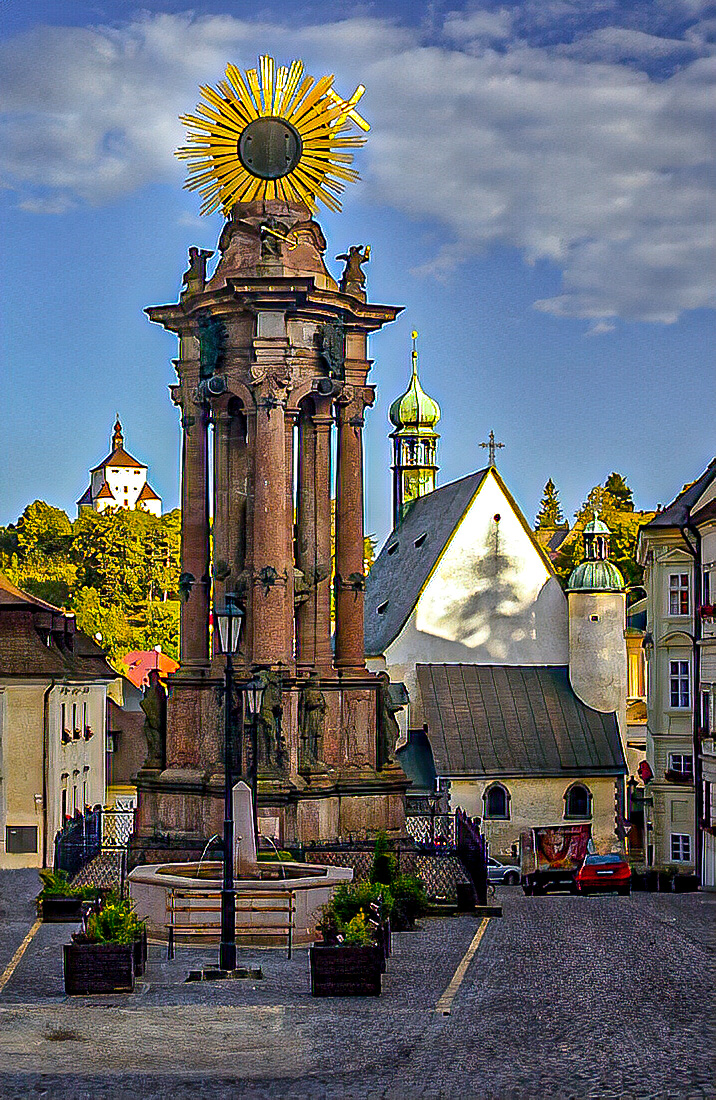 The dominant feature of the whole square is one of the largest trinity columns in Slovakia. The Baroque column of the Holy Trinity was built after the retreat of the plague epidemic in 1710–1711. The original column was very simple and it was not until 1759–1764 that it was rebuilt according to the design of sculptor Dionýs Stanetti and stonemason K. Holzknecht. The base of the column consists of sculptures of seven saints, protectors against the plague and patrons of miners (St. Joseph, St. Sebastian, St. Francis Xavier, St. Roch, St. Catherine, St. Barbara, St. Rosalie). The column, which stands out with its canopy architecture, is complemented by a statue of the Immaculate Conception and at the top is dominated by golden rays of gloriola sculptures of the Holy Trinity.

In the embrace of the Kremnické hills lies the picturesque town of Kremnica, under which in the past there were gold-rich mines. Although Zlatá Kremnica avoided the greatest plague epidemic - the black death in the 14th century - it came one blow after another. The last one in the 18th century. 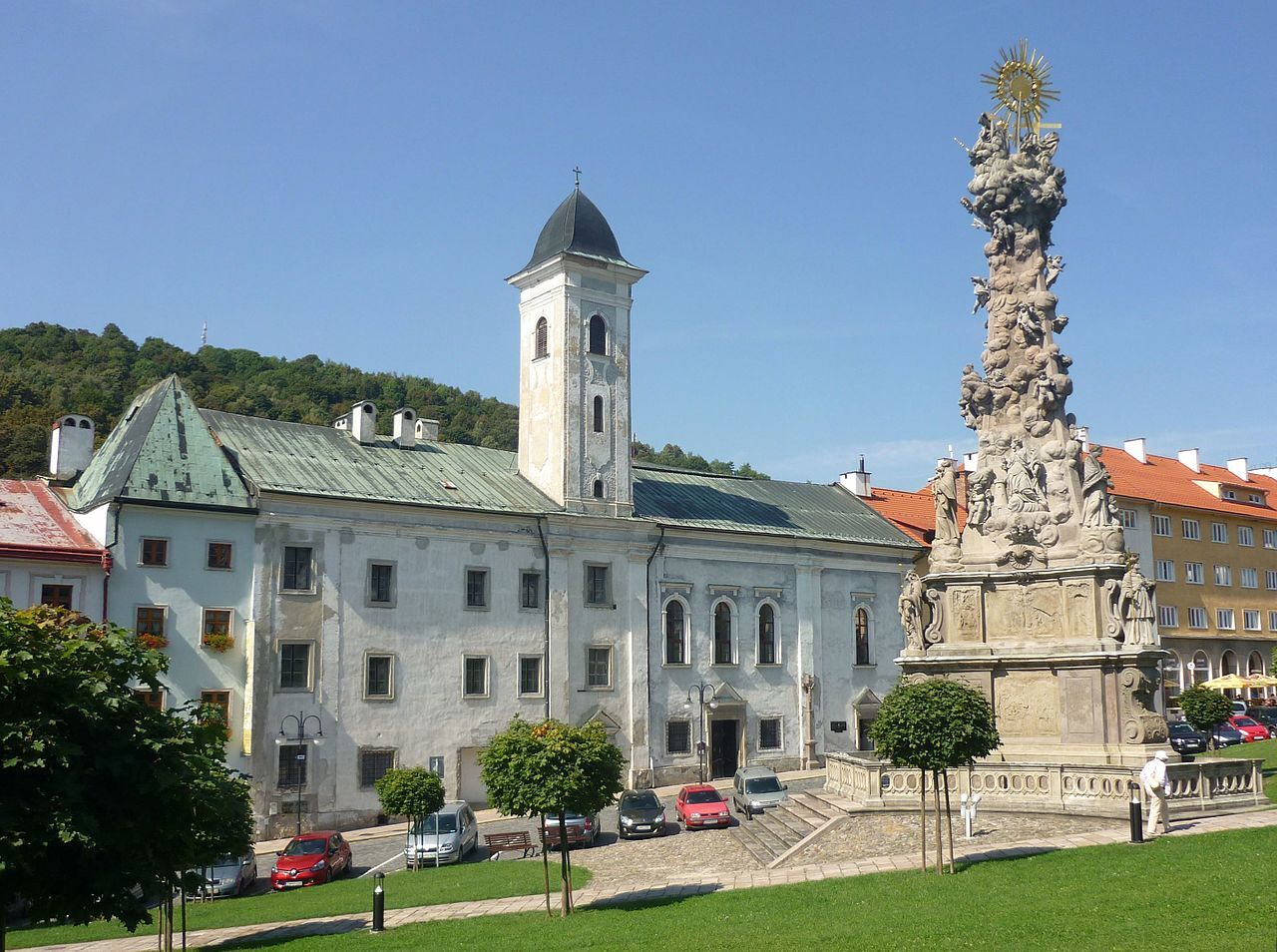 The Kremnica people also wanted to thank you for ending the epidemic of 1710 by building a plague column. However, you will no longer find the original very simple plague column from 1711 in the town, because in 1761 it was moved to Horní Ves, where it still stands today. 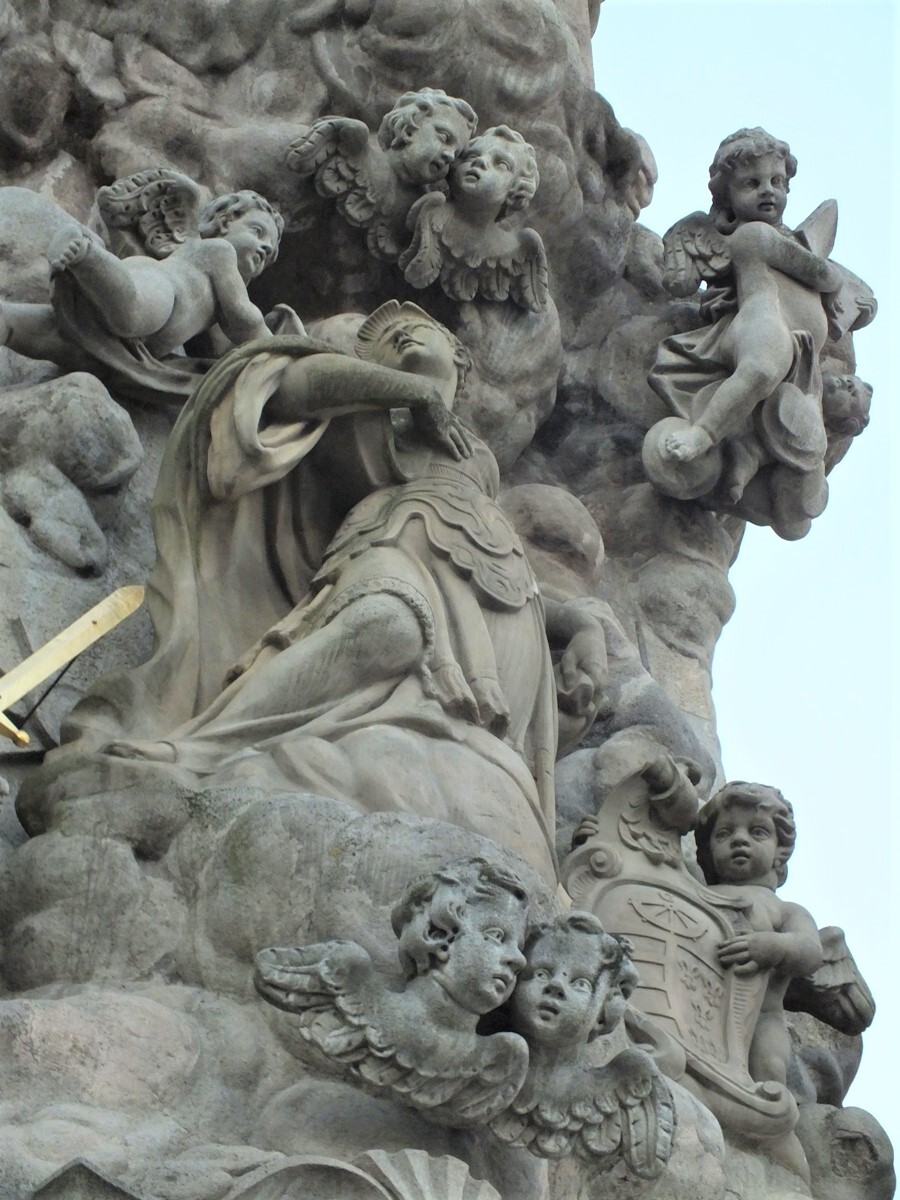 The space after him did not remain empty. The townspeople wanted a more magnificent and monumental column, as the city known for gold mining and coinage belongs. The Baroque period raised Kremnica in fine arts to the level of developed Central European cities. Therefore, in May 1765, the city council decided to build a late Baroque column of the Holy Trinity according to the design of a Kremnica burgher and sculptor Dionysus Staneti. 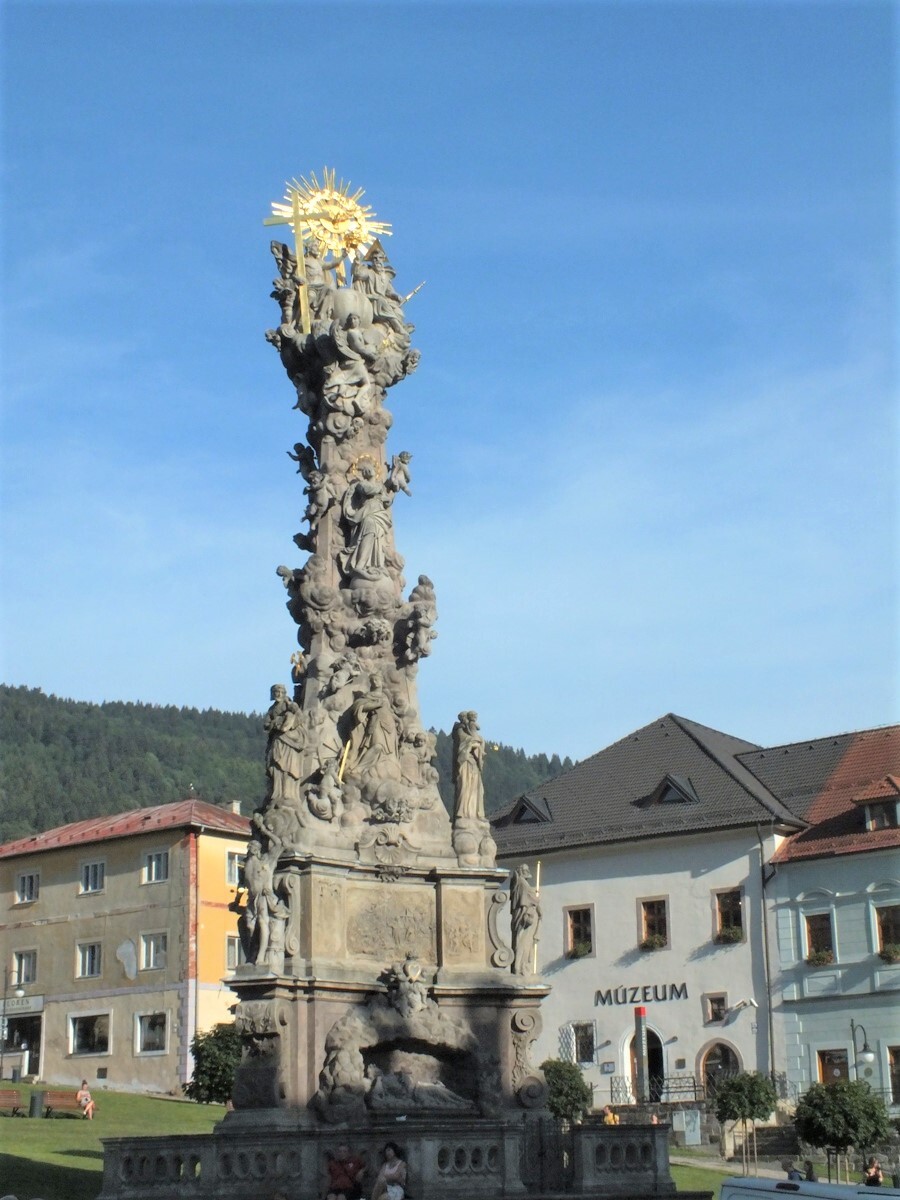 His design was inspired by the first plague column in Vienna, and his price (22,850 gold) corresponded to this. Finally, they had to invite the Viennese sculptor Vogerle, who became famous for the plague columns in Hainburg and Nitra. Unfortunately, none of the sculptors survived the completion of the work in 1772.

The Plague Column has four ideological plans. It is supposed to commemorate the epidemic, depicting the Holy Trinity, also Immaculate - the Immaculate Virgin Mary, the patron saint of Hungary and finally the saint.

But it had another meaning. Wondering what? We'll tell you in a week.