Published: 8.1.2019
An ancient city in northern Thailand, the history of which dates back to 1296, was famous for its more than three hundred Buddhist temples. Wat Chedi Luang in the very center of the city is one of the most famous, oldest and most visited, so let's take a look at it together.

Although the temple consists of several buildings, most of the visitors come here because of the originally 82 meter high brick staircase. Its construction began at the end

of the 14th century and, at the time of its completion, about half a century later, it was the largest building in the Lanna kingdom of which Chiang Mai was the capital city.

At that time, the temple concealed the statue of the "emerald" Buddha, which you can find today at Wat Phra Kaew Shrine in Bangkok. Unfortunately, in 1545, the temple was damaged by earthquake and part of the stump collapsed. That is why the Emerald Buddha moved to Luang Prabang in Laos today, from where he gradually reached the new capital city of the kingdom of Siam - Bangkok.

If you visit Wat Chedi Luang these days, you can see at least a copy of the statue in the reconstructed east ridge of the temple. Besides, visit the shrine that hides the so-called city column. The local believes he supports the whole city and gives him spiritual strength. In several other sanctuaries along the perimeter of the main temple you will see Buddha statues in different postures. 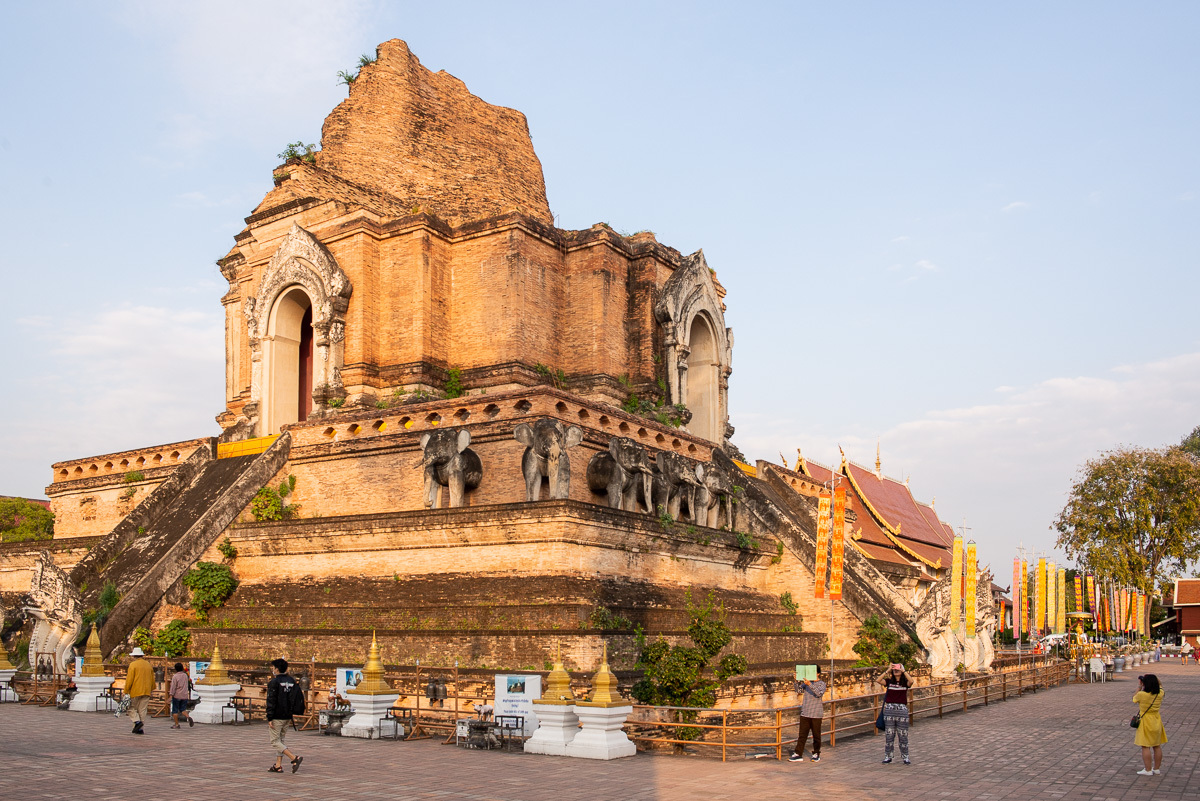 In the temple premises, you also come across monks everyday to talk about Buddhism

or Thai culture. They are mostly young novices who speak very good English, I really recommend to make there a short break at least. This is one of the best opportunities to learn something interesting about life in Thailand.

Right next to Wat Chedi Luang, visit the small wooden temple of Wat Phan Tao (sometimes called Wat Pan Tao). Although there are a lot of tourists, it is one of my most popular in Chiang Mai. Especially for a visit during Yi Peng holidays, when it was full of colored lanterns and candles, I will never forget. Unlike most other temples, Wat Phan Tao is built almost entirely of wood and rather than enchanting your size, it will surprise you with details. At the same time, there are many Buddhist ceremonies, not only during the great Buddhist feasts. 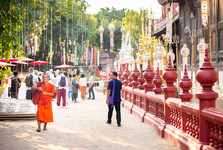 If you want to fully enjoy the view of the two temples, I recommend either to get up and come early in the morning, or at least reach the sunset between the fifth and the sixth hour. 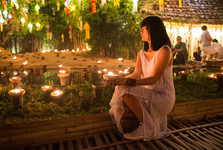 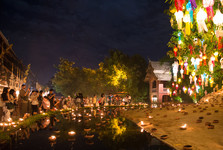 Thailand, Mae Salong – To Tea Plantations and Beautiful Vistas in the North – VIDEO

Published: 15.1.2019
Even in case of Thailand, the Chinese influence is felt very present. But the town of Mae Salong was founded by the Chinese in the mountains in the north of the country in the 1960s. From the beginning, he was mainly opiate, but today, you have an ideal opportunity to look at tea plantations and taste great food from Yunnan Province in South China.

Published: 5.2.2019
Approximately 450 kilometers north of Bangkok you will find several unique table mountains, most of which protect national parks. One of the most interesting is Phu Hin Rong Kla, predominantly in the Phitsanulok province. Here you will find the unique rock formations of Lan Hin Taek, to which we are now going together.

Published: 12.2.2019
Approximately 400 kilometers north of Bangkok, you will find the once powerful and fabulous but long-deserted city of Sukhothai. In the 13th and 14th centuries it served as the center of the first major empire on the territory of today's Thailand and Laos. Even though it has been abandoned for more than 200 years, it still breathes old glory and is definitely something to admire. Let's take a look at it together.

Published: 26.2.2019
Let's end the latest series of articles and videos from near-uncharted by tourists parts of northern Thailand to end up in a region that surprised me most of all. In the vicinity of Loei and Phetchabun, you will find beautiful table mountains, beautiful jungles, waterfalls and amazingly nice and hospitable people.

Thailand: Chiang Dao – Magical National Park in the North of the Country – VIDEO

Published: 25.12.2018
The north of Thailand consists, for the most part, of beautiful mountains that rise to over 2 000 meters above sea level. Here you will find waterfalls, karst caves, ethnic villages and secluded Buddhist temples. Let's now go together to the Chiang Dao National Park and at the same time to the 3rd highest mountain of Thailand.

Published: 28.3.2017
The climate in the mountains in the north of Thailand is very different to the south of the country. Mountains usually rise as high as 1500 meters. Temperatures can easily drop below 10 degrees Celsius in winter. That's why strawberries are grown here, for instance. The mountain climate is great for high-quality arabica coffee as well. About 50 kilometers from Chiang Mai town, there is a coffee plantation I went to visit. It was there where I finally realized how much work is behind one simple cup of coffee.

Published: 4.4.2017
Anyone who asks me where to from Chiang Mai, Thailand, gets the advice to visit Doi Inthanon national park. I recommend the very same trip also to you.

Published: 14.3.2017
In the very north of Thailand, there is the town of Thaton laying on the River Kok. The river flows here from Burma. It flows at the edge of Doi Pha Hom Pok National Pakr. Then, between the mountains it runs to Chiang Rai, and then to the borderline with Laos where it flows into the Mekong. If you are one for some adventure, take a small boat from Chiang Rai to Thaton. The journey is great. It is an adventure which can continue in Doi Pha Hom Pok National Park.

Thailand, Sukhothai – Ancient Ruins of the Capital of the First Thai Empire

Today we look at a once powerful and fabulous city, which has been abandoned for more than 200 ye...

Thailand: Unique Stone Formations of Lan Hin Taek on the Top of a Table Mountain

Most table mountains are protected inside national parks and one of the most interesting is Phu H...

The city of Chiang Mai lies in the north of Thailand and is famous for its many Buddhist temples....

Thailand: Chiang Dao – Magical National Park in the North of the Country

In the north of Thailand you will find beautiful mountains, caves, waterfalls and secluded Buddhi...