We walked down the famous Khaosan road. In the streets behind it we encoutered Original Guest House consisting of original tibered dwellings. We immediately set off to explore the royal palace surrounded by crowds. All its parts draw inspiration from famous temples in Thailand. Amazing. Then we went to Wat Pho temple and while doing that we encountered gigantic lying Buddha (45 meters long). 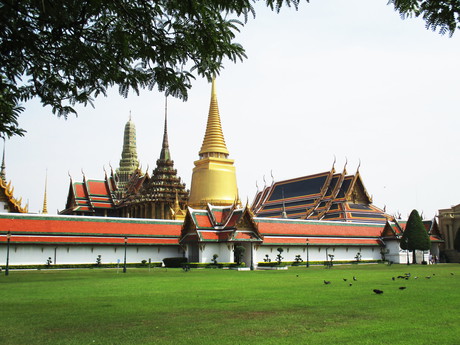 Then we moved on to the flower market. On our way back we took a boat which is part of Thai public transport system. Moreover, we took an amazing picture of Wat Arun temple (the temple of the setting sun) during the sunset. Amazing vista… 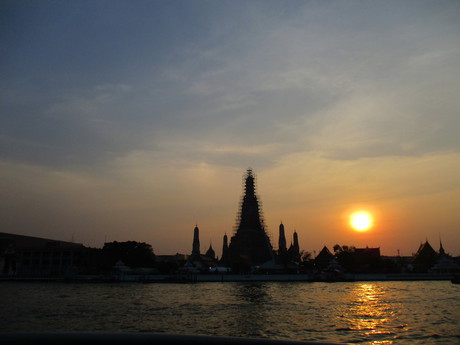 We booked a trip to the ghost city of Ayutthaya at local travel agency. The very first temple (80 meters high) looks like a pyramid of the Sun god. Even though my knee hurt me because of a ski accident shortly before our trip to Thailand, I had to climb up. The view was worth it. Then we moved to another temple resembling me of Angkor Wat, Cambodia. The fact that the kingdom reached far beyond Cambodia itself - to Thailand, Malaysia, Burma, Laos, and Vietnam is hardly surprising. There you find also the lying Buddha similar to the one Bangkok. However, the former is merely 42 meters long and is made of stone only which is why I liked this one more. He has his eyes closed which symbolizes that he is pictured after he passed away. The one in Bangkok has his eyes almost closed so he is just about to enter nirvana. Amazing details… 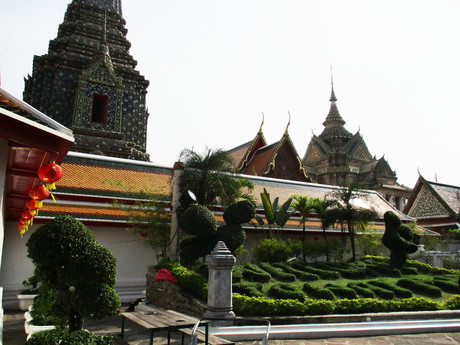 Then we continued to an island in the city. The island is surrounded with three rivers. The Praya runs through Bangkok. There used to be the royal residence. However, in the times of uprising in the mid-18th century the entire shrine burned down. However, huge temples around have been preserved. These reminded me of Angkor Wat. There is a giant tree in the back. It grows around a head of Buddha. It is pleasant look at this bust inside the tree. I remembered one of Buddha's sayings: "The root of all evil is the lack of knowledge." There are countles Buddha statues. It is said that monks hid gold in some of them that's why treasure hunters destroyed them. 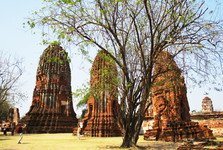 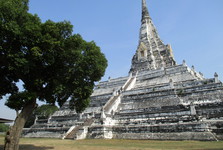 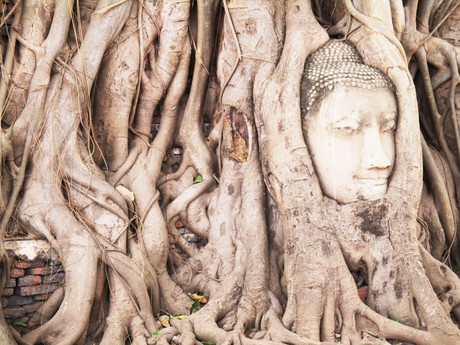 Towards the end of our tour, there is a huge scale model of the entire compound which gives you better idea of how it looked liked here once. We boarded the bus and set off to two shrines. The first one consists of three pagodas which are truly photogenic. Inside, there used to be stone Buddha but vandals demolished it. Close to it, there is a new temple with 25 meter Buddha with one of his hands resting on the knee and the second with palm facing up. They can be pictured with palms facing one on another - this posture is called meditation. Another posture is blessing - sitting cross-leged one hand resting on knee the other with palm facing up. You need to have your knees and shoulders covered inside the temple. The atmosphere is very calm there. Our guide told us that the title buddha is something similar to our "saint". Therefore, there were a lot of them.

Published: 14.3.2017
In the very north of Thailand, there is the town of Thaton laying on the River Kok. The river flows here from Burma. It flows at the edge of Doi Pha Hom Pok National Pakr. Then, between the mountains it runs to Chiang Rai, and then to the borderline with Laos where it flows into the Mekong. If you are one for some adventure, take a small boat from Chiang Rai to Thaton. The journey is great. It is an adventure which can continue in Doi Pha Hom Pok National Park.

Published: 8.1.2019
An ancient city in northern Thailand, the history of which dates back to 1296, was famous for its more than three hundred Buddhist temples. Wat Chedi Luang in the very center of the city is one of the most famous, oldest and most visited, so let's take a look at it together.

Thailand, Mae Salong – To Tea Plantations and Beautiful Vistas in the North – VIDEO

Published: 15.1.2019
Even in case of Thailand, the Chinese influence is felt very present. But the town of Mae Salong was founded by the Chinese in the mountains in the north of the country in the 1960s. From the beginning, he was mainly opiate, but today, you have an ideal opportunity to look at tea plantations and taste great food from Yunnan Province in South China.

Published: 12.2.2019
Approximately 400 kilometers north of Bangkok, you will find the once powerful and fabulous but long-deserted city of Sukhothai. In the 13th and 14th centuries it served as the center of the first major empire on the territory of today's Thailand and Laos. Even though it has been abandoned for more than 200 years, it still breathes old glory and is definitely something to admire. Let's take a look at it together.

Published: 7.3.2017
When talking about Thailand many think of beaches with snow white sand and never ending party in Bangkok. Only handful visit the north of the country and if they usually don't go anywhere beyond the towns of Chiang Mai, and Chiang Rai. The entire north of the country has beautiful mountain ranges, wild nature, beautiful native villages, and best conditions for making a trip by bike. So let visit the northernmost national park in Thailand today - Doi Pha Hom Pok.

Thailand: Ayutthaya – The City of Palaces and Temples

Ayutthaya is one of the most popular places to visit because of its temples and palaces. The town...

Should you intend to visit the north of Thailand, be sure to visit Doi Inthanon national park. Th...

The mountains in the north of Thailand are ideal for the growth of coffee. Our video today takes ...

Thailand: Thathon – City in the Shade of Amazing Mountains

Thaton town is sitauted in the very north of Thailand. At first, it doesn't look anything interes...