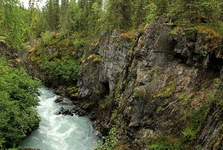 We get up, pack up and leave to town Hope for breakfast to restaurant Discovery Cafe. In the pleasant environment will fill missed calories and going to the river.

We are in the places where among the trees white water rolls, in the part that rafters love. Weather today is not that good, the rain is getting worse. Interest of tourists ride the raft also not giddy, we make a few shots and continue. The adverse weather won´t leave us all day, nature is very dark and sad, but sometimes we stop at some interesting perspective. Today's destination is the port of Seward.

A bit before Seward we turn toward the mainland Exit Glacier. This glacier isn’t fall down into the sea and it is possible to reach it by land. Dáše advises short walk, maybe those ropes rain causes emotionally is a short walk and he is not the overall impression of the environment is broken. The being of beautiful blue glacier we just guess. I find out that waterproof jacket is not waterproof at all ... even the photo technics backpack doesn’t look very good.

Totally soaked going back to the parking and leave to Sewa 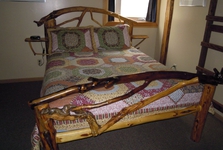 Country Seward harbour lies at the Gulf Resurrection - Resurrection Bay. It's a very nice town on the Kenai Peninsula. There live about 2500 inhabitants. The city is divided into two parts - the first, a quieter, it is an older centre, and second, it is a busier area around the port. Our guide booked for us hotel Swan Nest. The hotel is very unconventionally furnished in every room is one double bed (bed type "Flintstoune") and "floor" where it is necessary to climb the ladder. 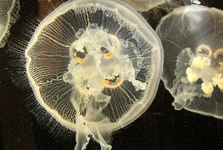 ctly in the centre is of science Alaska SeaLife Centre, which is one of the best museums and research institutions throughout the state. Here you can see a number of marine animals (otters, seals, eared seals, squid, birds, puffins, pigeon guillemot and other sea creatures). The great interest of visitors attracted place in the middle of the first floor - Discovery pool, where the open display case filled with sea water. There you can see and touch the starfish, sea anemones and other marine creatures. Yes, everyone can put his hand into the water and touch their bodies. To smell it, of what you would worried in the sea or you dare if from another reason.

After this excursion we return to the hotel where we finally accommodated, in the evening we do not plan any big program, preparing photographic equipment for tomorrow's journey by boat.

Program for this day - Kenai Fjords National Park - a boat trip to Northwestern Glacier. It is a landscape full of ice and rocks, the ice covers almost the majority of its area. We face three coastal glaciers, and if lucky, we'll see orcas and other whale species, cuddly otters, dolphins, porpoises, seals or sea lions and huge colonies of seabirds such as puffins and guillemot. Total length of cruise of 150 miles takes nine hours. 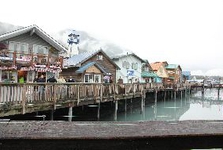 Morning does not start well. To change it is raining again. We're going to port Small Boat Harbor with the fact that it is not clear whether the cruise will take place at all, and if so, under what conditions, and where to get the boat. Upon arrival, we learn that in a minute sail. Waves are just 10 to 15 feet high, it is a little over 3 meters (track is 30.48 cm), and it is said to be fine, just powder seasick and we go. Initially the fog all around, still raining and the view is nil. The weather has only one advantage, many tourists on the boat is not. Still raining, a ship on the waves nicely throws, keeping the lens at rest is a significant problem. But patience pays off, after a while calling two killer whales (Orca-Killer Whale). Sail boat quite close, it really is an experience. I have a huge catch, when the whale goes into the ocean, leaving behind him a moment caudal fin in all its glory, which I managed to take.

Despite the bad weather we pass the all route, so we reach even the most remote place from the port of Seward - Northwestern Glacier. The ship stops in the bay, where we have the opportunity to take a picture of the amazing pale blue ice mass. Once we leave the bay, on the pack ice seals come out. These places are nice for them to relax, but from the ship and the number of tourists aren´t attracted. All the time when ship was in the bay, was not seen even the one, just once a time was appeared sea otter. Sea otters look like they are still laughing, moves that do act as waving at tourists and it's really nice experience to watch them. However, a trip to the glacier came well, fauna is really rich. We came back to the hotel and after the dinner talking about the program for next day.

In the next part we will look into the musher´s family and in an area where bald eagles live, we will hunt a few shots.