en.infoglobe.cz » CZ, Koruna and Bor – A Trip to the Heart of the Brdy

The situation around Koruna is a bit confusing, because when you look at some maps, you will see two hills with this name next to each other. However, for historical reasons, the main peak of the Crown is considered to be the lower one, reaching an altitude of 832 meters. It was through him that the borders of the Zbirož estate passed, later it became an important triangulation point and an iron surveying structure grew here. Fortunately, the corroded tower was demolished and destroyed. The higher peak of the Crown reaches an altitude of 837 meters. It used to be called Bor (today it is also called Faust), and it is after him that the hunting lodge that stood under it was named after it. The lower peak also owed its original name Bučina to a tree stand. This name is reminiscent today only of the nearby crossroads Pod Bučinou towards Tři Trubky. The currently used name Koruna was derived from the sign of the royal crown carved on the border bollards around the said border in the 18th century. 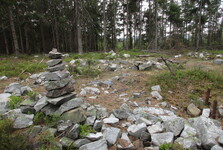 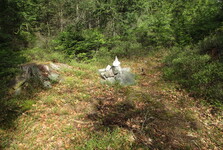 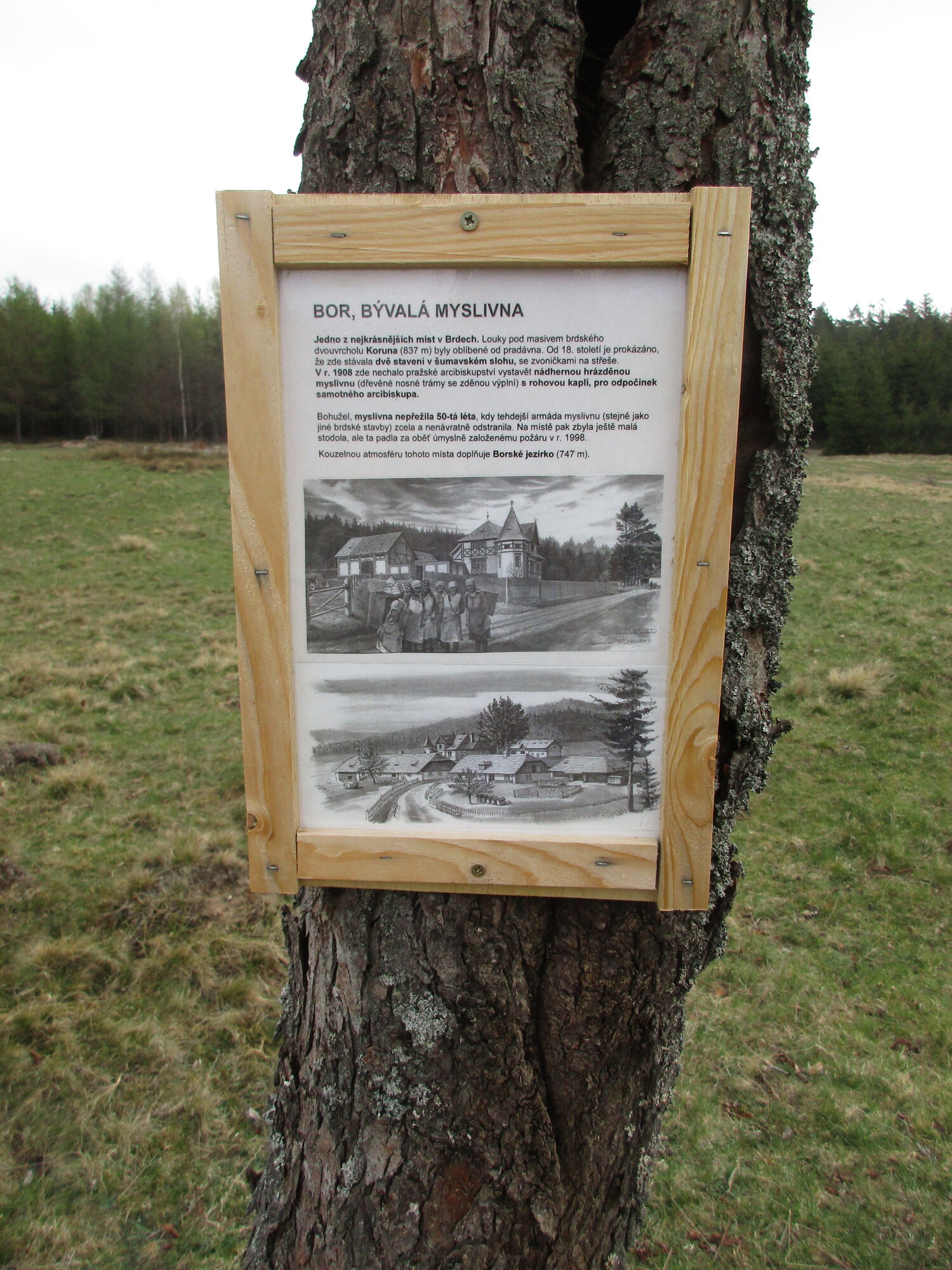 It is about 8 kilometers to Koruna from Laz. From here, you can get through the Skelná Huť along the Bahenská forest road to the Obecnická forest road, along which a green tourist sign leads to Bor and further to the aforementioned Pod Korunou crossroads. A little more, about 10 kilometers, it is from Bohutín. In Bor, you can also turn onto the Hořovská forest road and turn left after about a kilometer of walking. Following this forest road, you will also reach the lower peak of the Crown and several unmarked turns lead from it to the higher peak.

The aforementioned surveying tower no longer stands at the top of Koruna, but the importance of the place for geodetic measurements is reminded by two bollards, one from 1927, the other from 1950. The top is wooded, so the view does not allow. Occasionally, however, you can find places that allow small vistas, from several places between Bor and the crossroads below Koruna, very nice views of Prague open up, easily recognizable by the meteorological radar at the top. 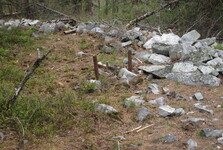 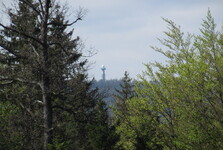 The Meadow of Bor

Bor is today an abandoned meadow enclave in the very heart of Brd, but once there was a representative hunting lodge in the Tyrolean style. It was the highest homestead in the forests of the Rožmitál estate. It can be seen from the photo that if it stood today, it could boldly compete with the nearby Třub Tubky, but unfortunately it was demolished in 1959. All that remained was a pond called Borská nádržka and several fruit trees. 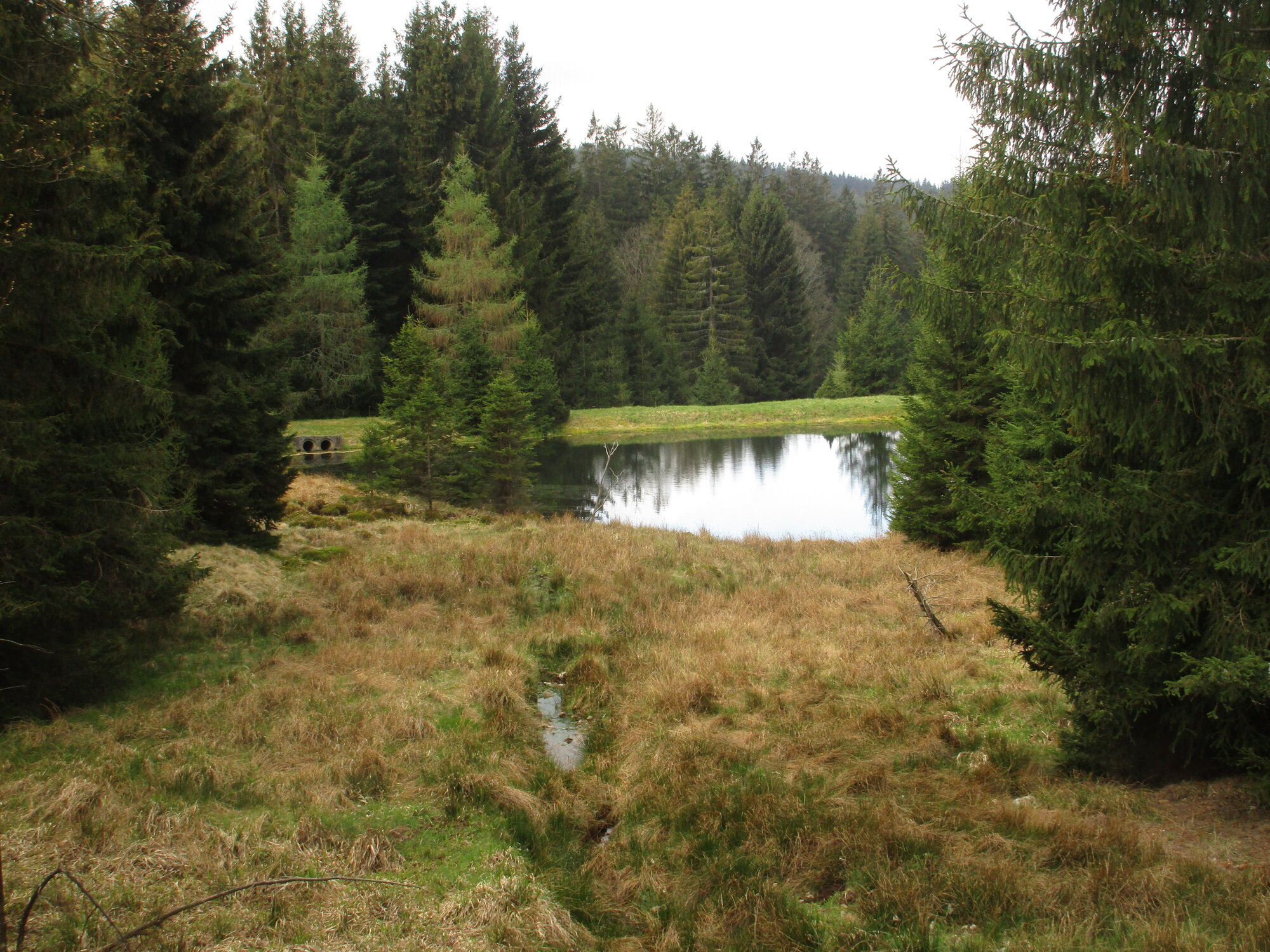