The Laz water reservoir lies in the forests near the village of Laz. It was built between the years 1818 and 1822. You will reach it by going through the whole village to the sawmill in Žernová and going out of it on a forest road. The dam has a barrier, and there is also a historical sampling shield, which is now protected as a technical monument. Valuable is also flora and fauna occurring nearby. European tree frog lives here as well as Alpine newt. Also, right in the reservoir there is Litorella uniflora flower. 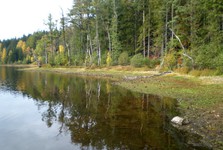 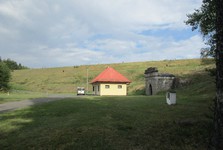 The largest dam of the Brdy is best reached from Bohutim or Kozicin or from the Laz waterworks. You can choose from two routes. In both cases, however, you must return to the village. Walk around the sawmill to the local junction and head right. At the first crossroads, you can go on the Perkanská forest road, after which you will reach Skelna Hut, where you will reach the blue tourist sign and then you will cross the crossroads of U Pilske Studanky crossroad from where you will get to the water dam. 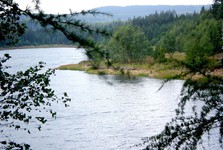 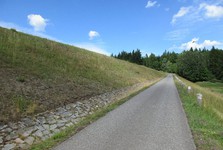 If you want to take a more straightforward trip, turn right on the crossroad and go around the gardens. The road passes under an elongated ridge called Zavirka. By going along it you will reach Pilska. The reservoir was built on the site of a smaller pond. It also inspired the name of the dam. The original plan of this site was larger than the water surface you can see today. However, in June 1854, heavy rains and made water soke through barely finished dam. Subsequent high water flooded Laz as well as Bohutin. Two people perished during the flood yet the well-built dam of the Vysokopecky Pond situated close from here prevented a larger catastrophe to happen.
The Lazska and Pilska water reservoirs were, in their time, very impressive buildings, which already carried all the distinctive features of modern dams. Among the important technical landmarks are also mines for collecting water. In one such mine near Pilska dam stay bats over winter. 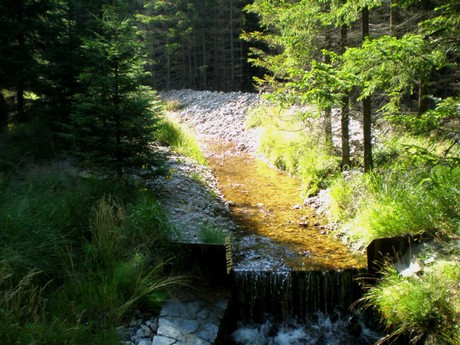 Struhy were designed to bring water from water reservoirs in the forests of Brdy to the mines of Pribram. The whole system was 17.5 km long and of slight elevations. The Struhy are, unfortunately, mostly covered in vegetation, damaged. A relatively preserved  segment is visible, for example, in between Vysoka u Pribramiand Bohutín. Fortunately, there are groups of enthusiasts who are not indifferent to the struggle of the struggle, struggling for the partial restoration of this waterwork. In 2017, the Rimbaba Bohutin Society succeeded in restoring a short stretch of gravel in the forest above the local municipal office. It is complemented by an information board where you can learn more about this unique system.

Other ponds founded for the needs of metallurgy include the Vysokopecky pond in Bohutín. Later it became a swimming pool, today it is a favorite place for fishermen. The rest of the ponds - Vokacovsky (also known as the Drozdak) - have recently been restored. In the forests near the village of Obecnice there is another of former mining ponds Although the building is officially named Obecnice water works, nobody here calls it otherwise than Octarna (according to the neighboring hunter's lodge). 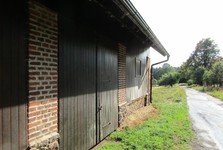 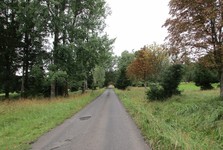 The system of small ponds can also be found in the forest park between Pribram and Bohutin near Lazec. In those places, the Celts once paned for gold. Bohutinske mining  ponds and Lazecke Holes at small scale together with Horni and Dolni game park of Pribram are situated on Wenceslas Square, Pribram. Scaled model of this network constitutes local fountain.