The Ohre River meander in the west borderlands was picked as a place to built a border castle in the 13th century. The Ore Mountains cover its back. In the past, the area was less densely forested but enemy would cover easily in dense forests. 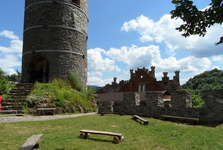 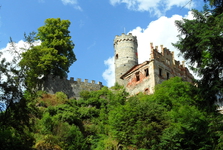 No details are known about castle’s foundation. Allegedly, Wenceslas II founded it. From that period, a cylindrical tower has been preserved. The tower was the core of the castle in its beginning. Today, a massive lime tree and grassy courtyard is on the rock. At Haunstejn, you learn about its history which is far from boring, especially the last 150 years which would make more sensitive people cry. 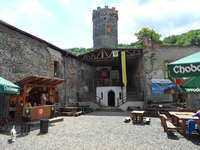 Large photos show the palace when it experienced its golden age until it was devasted after the war. The best years came after 1837. Gabriela Buquoy bought the castle then. She renovated it in the style of English Gothic revival. A comfortable and romantic castle appeared as the result. The present owner is trying to renovate it in the same spirit. Hitlerjungend had the castle at its disposal during the second world war as allowed by the Buquoys. In 1945, the castle was nationalized and operated as uranium mine workers quarters. Also, it was a student dorm until 1958. Then the castle was still in livable shape. However, the 30 years that followed caused it decay. All of the equipment had been stolen. Ceilings collapsed as well as lower floors. Only ruins was what remained of the castle. 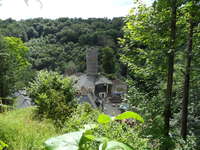 Today, the castle has been brought back to life. For a small admission, you can walk wherever you like. Climb up the tower, visit the dining hall in a Gothic cellar, Knight’s Hall with original carved ceiling, or renovated Trophy Hall , and a cellar with a stylized hell. There your children would be amusingly frightened. Ruined palace with horizontal and vertical openings that is decorated with wooden statues. Every year new are carved during art workshops. 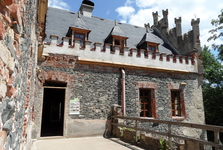 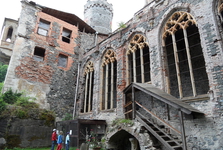 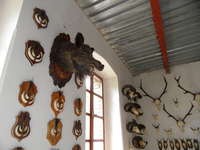 Cultural events are held on the castle on weekends. Behind the front entrance, there is a road going up to the chapel. From up there, you easily see the castle. The chapel is surrounded with an arboretum founded in the 1970s. Children on a school trip in here can stay over night. Also, a nature trail is suitable for them. The castle is opened daily during the season and on weekends and holidays from December to February.

The closest bus stop is 2 kilometers away. A car park is 400 meters from the castle gate.

Published: 18.2.2021
This year's winter is really rich in snow. And where to go on a trip when the lifts are closed, but you want to enjoy the snow? There are few possibilities in the Czech Republic and the Czech mountains are not only the Giant Mountains, the Jizera Mountains or the Jeseníky Mountains. We chose the somewhat not so touristy Ore Mountains with the highest mountain Klínovec.