en.infoglobe.cz » Places of interest » CZ: Karlovy Vary Or How The Czechs Sold This Town To The Russian-VIDEO

On one Ferbuary weekend, thermometer scale stopped on „0 degree“. Although such winter-day belongs  to those rather warm, semi-deserted Karlovy Vary welcomes us lazy. A boasting of Charles IV., its founder, is not too distinguishing - with its suburbs - from another regional towns, it is modern and has industrial character. Rounder-bounds, standard railway station buildings, wide streets and high tenement houses, nothing of the character which could be admired.

Karlovy Vary, situated into hilly countryside, giving the town its proper atmosphere, conceals their jewels inside, in bath zone. This is an area which gave world´s fame to Karlovy Vary. The people from all over the world arrive there, and they do not miss it also during such February day. The collectors and lovers of glass wish to see, with their own eyes, this piece of West Bohemia region, where famous Moser - glass brand - was established. On the other hand, who does not resist intoxicating taste of world - known Becherovka liquor, would like to know Karlovy Vary from another but rather clear reasons. Moreover, popular Karlovy Vary wafers could be an interesting variegation of all things of best quality, offered by this spa town. 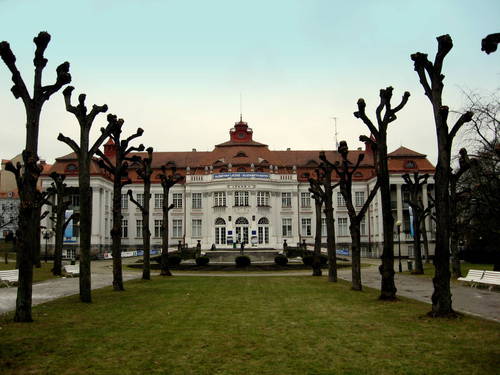 On the other hand, another persons are forced to visit Karlovy Vary (they fell in love with Becherovka taste of some other liquor, and now, they have to heal their sick livers, kidneys or stomach). They stay in bath houses and drink healing hot water from local springs. In the evenings, they let to be massaged, healing their sick organism at the same time. 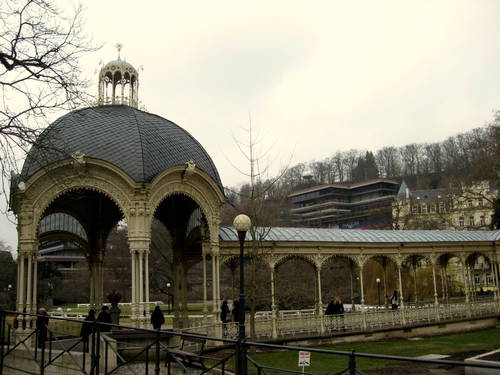 Teplá river flows through city centre, adding a beauty to never „get used“ Karlovy Vary. Good observers could see swimming fish at the bottom. A reason why local administrators let to wall up a piece of water vegetace, is simple. Mineral water found through its escape way, and spa sources missed its necessary passage across, which would be effective for so important town.

All could be followed as an ideal thing: the town, founded by Charles IV., spa springs, beautiful glass and china (porcellain), herb liquors or crusted wafers. Attention: this symbol of Czech character has the exception: Just close to a sign: „No entry“ in front of the entrance into spa -bath zone, a plate written in Russian letters, could be found. The Russians sell there cosmetics, Carlsbad wafers, offer excursions but also luxurious real estates. However, one from the towns, which could be presented with Czech national pride, is speaking Russian. 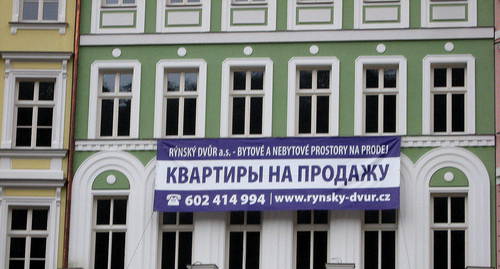 Along Karlovy Vary colonnade, a lot of lamb-head-caps, typical for Russian Federation, ready for sale, could be found. The inscriptions are in Russian language only, and so, such atmosphere reminds to the Czechs a period when so called „Red Brother“ ruled us. Anyway, similar reminiscenses enter into your head in the neighbourhood of Thermal Hotel. This building, constructed in its magnificent design of glass-concrete execution, renounces Communist idea.  It is true that, after nationalization in 1948, up to Velvet Revolution, 41 years later, the Soviets became most frequent clients of Karlovy Vary. Anyway, the visitors from West started to come there in increased number. However, the Czechs who respect their national identity, take Karlovy Vary, written with Russian letters, for some type of painful scar, no doubt. 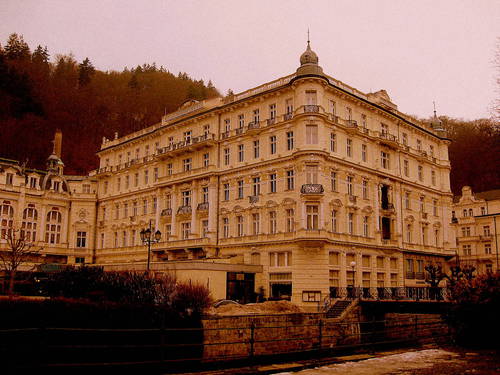 The town become busy each year with its International Film Festival. In past, many famous personalities of film art obtained there their cristal globes. Film lovers who visited Karlovy Vary at that time, in order to see the performances with their own eyes, paid for a presence of film stars their expensive price. The prices for hotel accommodation are on extremely high level during such period.

Nevertheless, not only film festival is attractive for Karlovy Vary visitors. On colonnades, you can listen to classic, folk or modern music. On horse-race route, grass line shakes below horse hoofs, golf playing ground is busy with many tournaments. Anyway, everything must be paid for, and in case of Karlovy Vary, it is of double value. 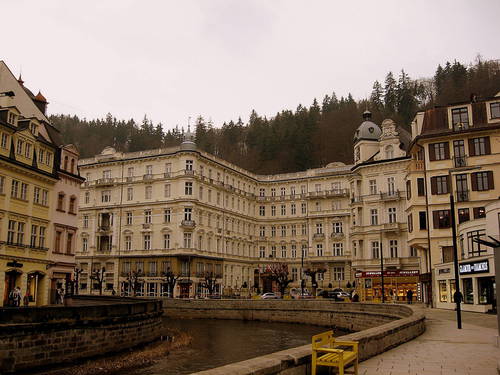 CZ: Nejdek - A Town In The Heart Of Iron Ore Mountains

Published: 18.3.2011
The town of Nejdek is situated in west part of the Czech Republic, Karlovy Vary Region, at the border with Germany.

Published: 2.3.2012
When we think of friends in which the corners of our country to go on the weekend of November slut, attacked us Doupov mountains that no one of us had ever visited. When we discussed the maps and information sources, we decided to combine this with the Czech mountains immediately adjacent Slavkov forest. There our journey begun.

Published: 7.12.2012
In recent years has been growing a popularity of relax weekends. After a hard workweek it is good to spend a nice weekend at some hotel specialized on wellness. Maybe you even didn’t know that you could enjoy your recess in a historical environment, or, even better, at castle…