The city used to be a Celtic settlement, siezed later by Romans they renamed it to Castra Regina. After the fall of the Roman Empire, in the early Middle Ages to the 13th century was the seat of Bavaria. It was here that he played one of the early Christianization of the population of the Czech lands, when several Czech princes there received baptism.

For a long time, Regensburg used to be an important center of trade.  In the 16th century, Regensburg became one of the pillars of the Protestant Reformation, and a few centuries later, it was important place of industrial production. During the Second World War, for example, there was a plant producing Messerschmitt Bf 109 aircraft and some oil refineries. Both of these objects have become targets of Allied air raids. 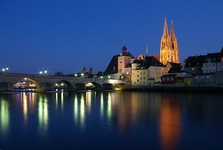 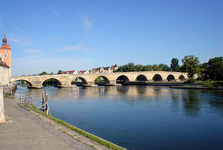 The historic center of Regensburg is what is the main attraction of the city. The medieval character of the center is almost intact and is also part of the UNESCO World Heritage .

One of the most important monuments is undoubtedly St Peter’s Cathedral . It stands on the site of the former episcopal church, which was built here during the eighth century. During its existence, the church had expanded several times, but in the 12th century it was hit with fire two times. Therefore Cathedral was rebuilt and completed until 1520. Its two towers are an impressive 105 meters high. Within the cathedral there operates a workshop since 1923, which oversees the restoration works and the maintenance. 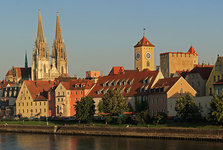 Another major monument in Regensburg is a stone bridge crossing the Danube. Most dates from the 12th century, but it was preceded by a wooden bridge, which was located about a hundred meters from the current bridge. Given that the predecessor of today's bridge did not fulfill the rising traffic in the city, it was decided to build a new, made of stone. Its construction lasted eleven years. It joins the Old Town with Stadtamhof disctrict. Up to the 1930s it was the only bridge over the Danube in Regensburg. The bridge has 16 arches and originally there were three watchtowers, but now remains only the south tower. Also, a legend is there about the bridge and the architect of St Peter’s. 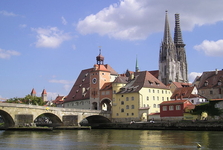 There was a bet who would finish their work first. Once the bridge builder discovered that his rival is faster. Thus, the bridge builder made a pact with the devil. However, the devil would agree only if he obtained the first three souls who cross the bridge. The builder agreed to a devil helped him to win. Master wanted to trick the devil, and therefore as the first three souls he sent a rooster, a hen and a dog to cross the bridge. Indignant devil wanted to destroy the bridge, but the work of destruction, he failed. Therefore, as a consequence of his act, the bridge is curved.