Kysuca village of Korňa that lies on the mountains Turzovka Highlands, was part of the famous and the largest village on the Slovak Republic, Turzovka until 1954. Today there lives over 2200 permanent residents and their holiday cottage in the beautiful countryside valley along stream Kornianka are regularly visited by people from near or distant surroundings.

Recently Korňa increasingly trying to get into public awareness as a Kysuca centre of tourism and agrotourism. Due to border location and charming nature this paradise for mushroom and berry lovers and more frequently visited by tourists from the nearby Czech Republic and Poland. We stopped here just for a moment during our journey from Klokočov back to Žilina, but now we know that it certainly was not our last visit. Fragrant nature directly attracts the tourist trips or bike tours to explore the natural beauty or other attractions. 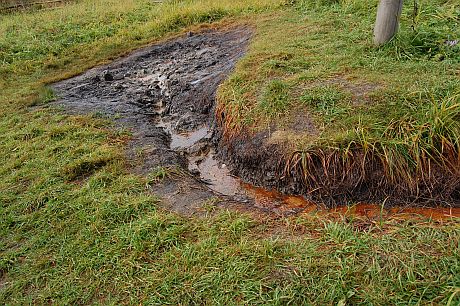 One of them is Korňan oil spring, which draws attention to the information board at the main road on the eastern border of the village near the settlement Muchovec. If you drive there, will be the best, if you park there. To the spring it is not far.

By slight rise you walk around several houses, then a

few more steps and walkway next to it you will see. Small pond with dark dark fluid leaking source, enclosed by a wooden fence. Somehow this seems unique natural surface spring of light oil with slow runoff and occasional outbursts with methane. In 1984 he was Korňan oil spring declared as a natural monument. Although previous studies have confirmed that this is a very good oil, not shown here enough to make sense its industrial production. Local people in the past but could really use all that Mother Nature had to offer. Oil from the source used for example for lighting, lubrication cars or even shoes, or as a medicine for skin diseases of cattle. To date, the local word of mouth spread the story of devils, who apparently live in the surrounding forests and walk at night to drink water from "black spring". 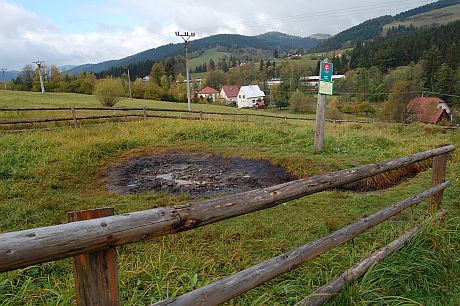 Near Korňa is one more very interesting place - Živčáková hill. At the very top, which lies at an altitude of 787.7 meters, leads multiple access paths. More than a tourist, however, peak searching believers from all over Slovakia, but also from abroad who come here to pray. In 2008, when 50 years have passed since the alleged apparitions of the Virgin Mary on the hill just Živčáková, said Bishop Žilinský this place as an official pilgrimage site. Throughout the year there are a number of common place, but also individual pilgrimages. In the area, there are several springs, which people believe they have healing effects. Interestingly, the water freezes in them even during tough winters, which is a region known Kysuce. From the village Korňa lit path leads here, next to which is carved modified Stations of the Cross.

We are on top Živčáková unfortunately did not get because we pushed the time, but next time there certainly look.