Old pictures and engravings confirm that, in past, tens of similar mills swam on Váh and Danube rivers. As a difference of classical water mills, established firmly along banks of torrents and

rivers, these ponton-mills were boats in fact, anchored since spring till the autumn rather distant from the bank, in order to use fully the strongest stream of the river, and a foot-bridge connected it with the bank. Ivan Sali, a proprietor of such mill, gives you with pleasure more detailed explanation. He is looking after, together with his wife and his friends (from local protective association), this remarkable technical monument. Anyway, only well-to-do manager could be the owner of such type of the mill. He must obtain enough financial means for its construction. Moreover, he was, since spring till the autumn, on the river, and the guarantee had to be secured that his fields and estate could be looked after during his absence, by somebody else. 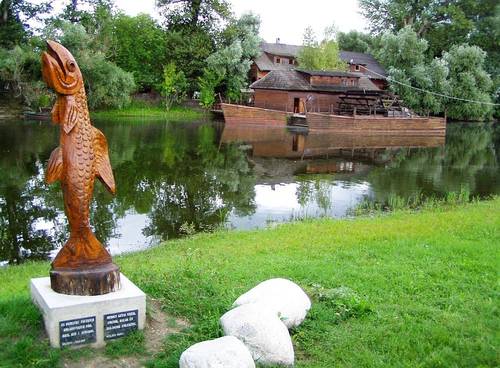 This ponton-water mill is formed by means of two boats with paddle wheel and upper construction with mill equipment, being miller´s family residence at the same time. As a  salary for ground grain, it was mostly a part of ground flour. On the other hand, even the fish and all, what the river could offer, became an important part of miller´s living.

Past fame of  these types of mills

However, a fame of such ponton mills dropped. As a reason, it was an increase of more effective industrial mills (which were not referred to water force only), and later, also a prohibition of such swimming mills on main Danube stream, where the mills became a barriere of increasing navy and boats´ traffic. To tell the truth, the only existing ponton swimming mill in Slovakia, it is a copy of so called Radvan Mill (named according to the community of Radvan, not far from Komárno). In fac

t, this mill burnt out completely at the end of the 2nd World War, as the last one from swimming mills of East Slovakia.

The copy of this construction, created according to time paintings and models, using several original parts at the same time, was made by enthusiastic persons in Komárno dockyard for museum purpose in 1980. However, their work fell into decay within couple of next years without any use. Nevertheless, after change of social relations, the protectors noticed its importance and transferred the construction to Kolárovo, not far from the tributary of Váh and Small Danube rivers.

So, since 1995, a nature area, in the neighbourhood of the mill, was established. The monument became an attractive target especially for cyclists and weekend walks. Except dwelling house with a pub, there was created a museum of old agricultural machines and family ecological farm with house animals.

The other speciality is attractive for the visitors: It is wooden

covered bridge, probably the longest one in Central Europe. Local enthusiastic persons built it, as a substitution for previous provisional foot-bridge. The bridge is 86 metres long. Nature area Water Mill in Kolárovo is open all year round, during winter saison (since October till May) in the afternoon only. The mill sightseeing, including museum guided tour, is recommended to be stipulated in advance. The entrance ticket costs EUR 1, the children and pensioners pay a halp of this amount. The area is suitable also for various social events, such as: children camps in nature in summer, as well as the other activities of agro-tourist plans. 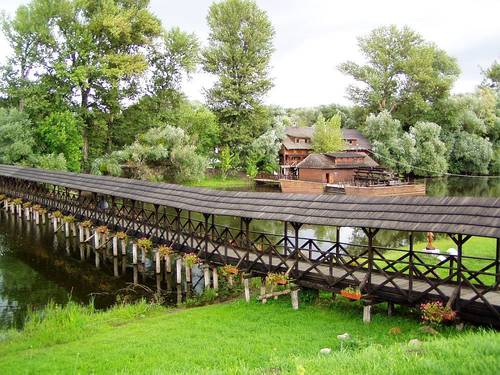 Published: 14.2.2011
Water work Králová on Váh-river in South Slovakia has relatively short history, so many persons could not enter into their subconsciousness, as an attractive tourist place of interest, making comparison to older dams.