This hundred thousand city can offer not only boasts cosy streets, excellent gastronomy, hotels with a homely atmosphere, beautiful parks, museums, as well as the oldest library in Saxony. In 2018, the city celebrates the 900th anniversary of its creation. In the beginning was formed by mining activities, which influenced architecture and the very appearance of the city, but now it's been making cars and music that gives the city a new pulse of life. Thanks for August Horch car went on a journey to victory around the world. In the same museum, visitors can see a shiny brand models Horch, Audi, Wanderer and DKW. For music lovers again offers house of Robert Schumann, which can be viewed in addition to photographs, letters and period furniture and "great love" for music and his wife Clara.

The dominant city is certainly a beautiful huge dome Wed Marien in contrast with small houses from the 13th priestly century, which together form complex oldest residential buildings in Germany.

Since the beginning of the founding of this city influenced his development of silver mining, which he ultimately brought great wealth and opportunities to develop. Also for this reason, today, visitors admire the wonderful, but expensive construction, which is the church. Anna. This church is the largest Gothic church in the late Saxon renowned mining altar. Equally interesting is the small church of the Virgin Mary, which is hiding with nativity figures of miners. This work highlights the close connection between mining traditions and Christian beliefs.

In the city of Annaberg - Buchholz taught mathematics and a master of Adam Riese, who is devoted to a museum. Visitors can obtain a degree according to the methods of Adam Riese ("a man who learned to expect ordinary people"). Today in Germany uses the phrase: "According to Adam Riese is a ...".

Besides the aforementioned math amaze you in the tradition of carving and lace, which visitors can not only admire but also to try for yourself and learn to these traditions. History of the silver can go down into three demonstration. The protected object "Frohnauer Hammer" with originally preserved mining techniques are presented with the former way of processing ore. 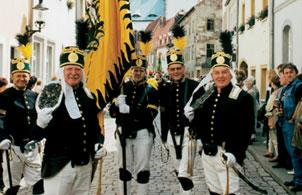 850 years old city with a rich mining history, offers visitors over 550 listed heritage houses and buildings in the historic centre from the late Middle Ages. The treasures include an impressive church. Mary Golden Gate with the first arch portal decorated with figures in the German-speaking countries. Inside the church you can admire the beautifully prepared Tulip mining or pulpit.

An additional feature is the city's theater, one of the oldest in the world, whose baroque interior boasts as "small Semper" (Dresden Opera). The reconstructed castle Freudenstein is hiding the real treasure in the form of private collections of minerals called "Terra minerals." It is the largest collection of its kind in the world with more than 80 000 exhibits. In the chateau there are more than 5000 beautiful minerals from Africa, America, Europe and Asia. Tourists can go on the trail leading through a sample of silver mines in Saxony "Zeche Reich," where up to eight-hour tours are held at a depth of 150 m below the surface, accessible to wheelchair users and children.

In our series, we'll continue next time where we imagine Lessing Alum city, the city of Bautzen and Zittau tower, the city Lenten Veils.

Published: 6.9.2018
If you want to take a trip abroad to see the gems of Czech-made architecture Czech s, you do not have to travel far. Only 1.7 km from the Czech borde, there is a romantic place in the German Saxony, which is historically linked to the Czech Republic.