The ruins of Bzovik-fortress are situated in the south of Central Slovakia, Banska Bystrica Region, eight kilometres distant from the town of Krupina. It is placed in south dire

ction from a community of the same name (Bzovik) on low elevation of Krupina plainland.

Some Facs from History

Just within the first third of 13th century, Lampert from Hont-Pazmany Parentage, together with his wife and son, built a monastery, in honour of Stephen, the first Hungarian King. Two-navy church in Romanesque style, together with a monastery, became, within 13th century, a target of attacks, and so, it happened that the complex burnt completely several times. Despite of this, the monastery was always re-built again. Even within this time period, the area undergone also reconstruction in Gothic style. However, after defeat of Hungarian troops, after Mohacs battle, the monastery was introduced again of big attention. In 1530, Zikmund Balassa, a feudal oligarch, occupied Bzovik Monastery, and started to effect, in solid way, the

complex to change into impregnable fortress, as a fear against a danger of Turkish attacks. So, old Romanesque south tower was transformed into observer point, and the whole monastery was let to surround with high walls, including four corner bastions. Even water ditch was built around this citadel. Afterthat, when the monastery was conquested and plundered by Tokoly rebellious military troops, the fortress became, at the end of 17th century, again Church property, and a reconstruction in Baroque style was effected there. However, next period came to its irretrievable destruction of this, in past important citadel. Since the first third of 20th century, the citadel was stopped to be fully used and started to fall into decay. However, during the 2nd World War, Bzovik Monastery suffered from great deny, as the internal buildings changed into garbage-yard, and the northen tower were destroyed. Nevertheless, since 1964, the complex was registered into cultural monuments survey.

What the legend says

Bzovik has its own mystery and secrets, as it is a case of any other castle or citadel. Most popular legend, joined with this fortress, is rather ghostly. According to it, very worried and desperate daughter phantom of high-born Master Balas is walking up and down along walls every night. The monks, who were expelled agreeably to the order of her father, kidnapped her, and as a consequence, they revenged and killed her, as innocent in her martyrdom. However, this poor woman did not found her repose even after her death, and so, she walks astray along walls every night, wailing and moaning, heart-breaking.

However, only the ruins were preserved from former anti-Turquish fortress. N

evertheless, even such ruins present quite clear picture, regarding extent and arrangement of all buildings there. From these, in past really wonderful monastery buildings, only sacristy of Gothic style was preserved till now, rebuilt to chapel. The remaining buildings were not preserved, and even its grounds were cove

red with vegetace. Although the monastery ruins act in very imposant impression - from the first view - when the visitors enter, their impressions would be rather worse. Partially reconstruction was made there but not in good way, as this would be necessary for historical monument of such dimensions would be merited. However, an expressive interference of not too suitable procedure could be followed, for instance, in effort to

adapt the fortress to modern era, by means of electro -installation introduction or by settlement of metallic segments in bastions, as well as in case of insensible use of concrete during partial reconstruction. Inside one of bastion, winding concrete stages are built, quite interesting from the first view, but absolutely bad from complex historical view from such monument. On four corner bastions, you can perfectly follow the holes for guns or barrel vaults of Renaissance style with lunettes. Although this fortress does not belong to popular places of interest, it is worth to be visited, in order to get better knowledge of one from most remarkable Slovak regions and so, a part of its history.

The fortress is placed close to the community of Bzovik. You can see it from main road, so, it is not difficult to find it. Direct regular bus connection is available from Krupina, and if you decide to make an excursion there, you will probably change in Krupina. On the other hand, yoi can comfortably arrive there by car. In the community, close to the church, you turn aside on direction to the village of Unatin, and continue straight ahead, and after 400 metres distance, you turn to the left, passing the second diversion, driving along secondary gravelled way, which leads you just in front of access bridge at the fortress. Regarding parking, it is no problem. You can do it directly on this way or at the diversion close to the citadel. In the community of Bzovik, you can find railway station, so that you can also arrive there by train. From railway station, it is pleasant walk, approx. three kilometres long. 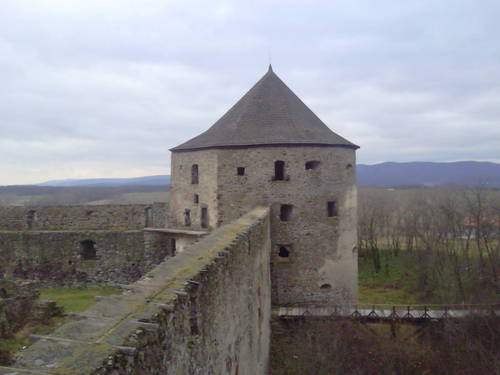