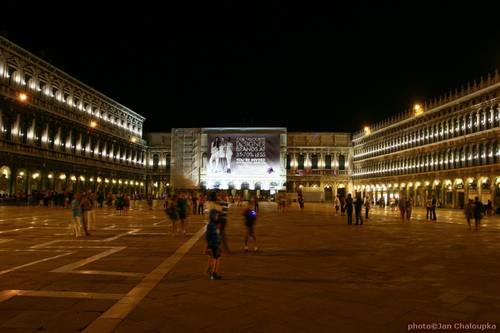 In previous part we described our arduous journey in tangle of narrow streets to finally really actually accidentally get on the famous Venetian square - Piazza San Marco. Unfortunately, the bigger area and one of the wings of the palace, now serving Archaeological Museum covered by a high fence, behind which was reconstruction. Due to the time of late night, the square was unusually dark and above it was missing him famous flock of pigeons that had somehow contributed to the atmosphere of this city.

St. Mark's Basilica was obviously closed at this time, but according to the testimony of daily visitors means tour inside to spend tens of minutes in the sun in endless queues. Since I am not a believer in this type of tourism and better meet the real face of the city and place, I did not bothered by the fact inaccessible sites. On the contrary, the findings were by no means pleasant fare Vaporetto, which we wanted to use on the way back to Piazza Roma, from us for almost two hours last bus leaving the mainland. Today, 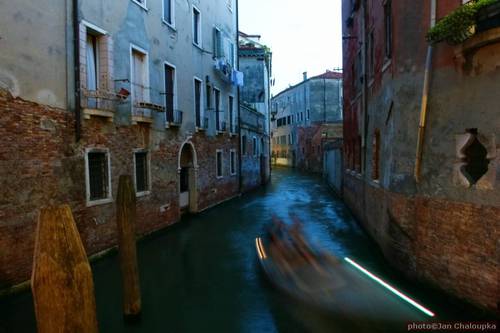 when I look at the ticket prices, I somehow do not know why we did not invest some 12-14 Euro for a return journey, given how long the journey took us to St. Mark.

Because the move can´t kill and time is enough for now, we went slowly by direction, which made sense for us. Although again without a map and instructions, but with the knowledge that you have at least half the city somehow mapped out and maybe even come across one of the famous attractions on the banks of the Grand Canal and maybe we will have a time to drink a glass of wine here. If you decide for interesting journey by water bus, also called a Vaporetto, know that for hourly tickets you will pay about 6-7 Euro a day ticket will cost around 15 Euro. Best option for the region of Venice is the Tourist Travel Card, from 12 hours to several universal fare for all public transport modes, which you can buy at places with "Hellovenezia". 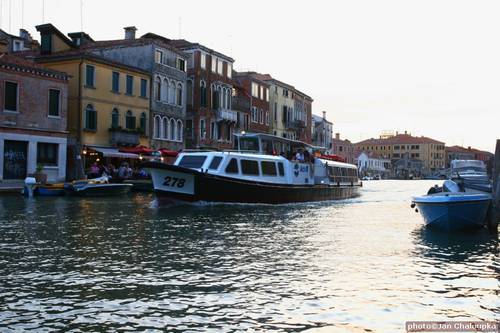 Who is already one in the heart of the city, after all should explore known Mark's Basilica, in which there is also a famous Sighs - Bridge of Sighs. This building from 1602 connects the interrogation room adjacent to the Doge's Palace and prison, from which supposedly came the wailing and guttural screams of tortured and detainees prisoners.

Already mentioned Doge's Palace is part of the St. Mark's Basilica. Several stately building was renovated last underwent extensive modifications after fires at the end of the 14th century. Head Doge - crowned ruler chosen for life, heads the Venetian Republic, which gradually since the Middle Ages shared much with many other instances and institutions, forming a unified political system is one of the most influential republics of the former world.

Venice was a will be the city of culture, which the millennial link influenced the whole of Europe. Enumerate all representative of the Venetian school of art, music or literature would ce 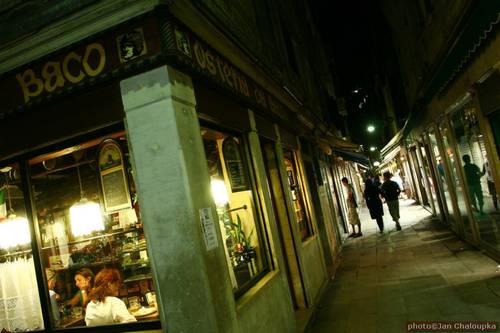 rtainly take a lot of sites, not to mention the present.

Today's metropolis, if it can be so called city on the water, or rather perhaps aquapolis, is still a remarkable city, where even the smallest sunken alley has its own unique charm. Each lantern illuminates some interesting corner or detail. Everywhere there is order, nowhere tons of garbage, as is the case elsewhere in Italy, which raises the question of whether there are actually Venice Italy and local residents consider themselves to be Italians.

These and other questions challenged us on the way back to the bus station, during which we unfortunately due to lower short again saw nothing interesting, but instead we have tasted something of the soul of this remarkable place. At a time when most restaurants and bars finally closed its shop windows are s 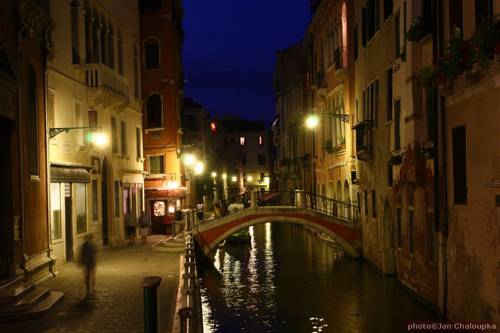 omeone somewhere just above the path handed a small oriental fast food, in which we received a really amazing combination of gyros, tortillas and toast in one. This royal dinner table, which became the bank of the river and the bridge stairs at one of the side channels, we will certainly remain long in the memory. Today, when our legs stopped to sore, over a map with a plan of our Venice trip, which we faithfully recorded as expired streets and squares, replay again that evening when we were at least a few hours become a part of this beautiful city.

PS: this evening and night, we walked about 12 kilometres...